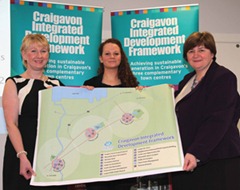 Craigavon Borough Council is continuing to drive the regeneration agenda in Lurgan, Portadown and Central Craigavon through a range of initiatives that are currently being implemented through the Craigavon Integrated Development Framework (CIDF).

Since the launch of the CIDF in 2010, a major programme of public realm improvements has been completed in both Lurgan and Portadown town centres, while further retail investment has been witnessed in Central Craigavon. In Portadown, work is also underway on the Vico site, and Translink is advancing a programme of improvements at Portadown railway station.  There are a number of public and private sector development projects emerging in Lurgan and Central Craigavon. The level of investment that these projects represent reflects growing confidence in Craigavon as a place to live, visit and do business.

During the most recent meeting of the regeneration partnership in March 2012, progress on a number of initiatives was highlighted:

2.    Meanwhile Space (Portadown & Lurgan) – promotes the availability of vacant shops in Lurgan and Portadown for interim use while they are seeking a permanent tenant.

3.    Old Town Quay (Portadown) – a scheme that would lead to the redevelopment of a highly accessible edge-of-town centre link to the River Bann, opening up a range of recreational and tourism opportunities.

4.    Portadown Gateway – an area of under-used edge-of-town centre lands between the River Bann and the Northway. The Council and the DSD are exploring the feasibility of innovative regeneration delivery models which could address infrastructure requirements that would release land with significant development potential.

5.    Public Art (Portadown & Lurgan) – the Council has secured artwork by Maurice Harron to be installed in Lurgan and Portadown during 2012.

6.    Portadown Revitalisation – funded by the DSD, this project will implement measures such as vacancy reduction programmes, physical improvements to properties and co-ordinated marketing initiatives and events.

7.    South Lake Masterplan (Central Craigavon) – the Council is undertaking a master-planning exercise with regard to the South Lake area in Central Craigavon, exploring development capacity and the current feasibility of potential land uses.

8.    Proposed Leisure Development (Central Craigavon) – the rationalisation of leisure facilities to ensure the highest possible standard of provision in a location that is accessible to all remains a priority initiative for the Council, and will potentially serve as a key driver for further investment in Central Craigavon.

9.    Lurgan Public Realm Phase II – the Council, in partnership with the DSD, is carrying out a second phase of public realm works in Lurgan which will complete the environmental improvement of High Street/Market Street, as well as a number of other key streets and spaces in the town centre. The construction phase will be completed during Spring 2013.

10. Lurgan Re-Store – funded by the DSD, this initiative aims to revitalise the business and retail heart of Lurgan through the delivery of a     range of physical improvements and marketing initiatives.

11. Neighbourhood Renewal Retail Capacity Building (Lurgan) – this project is designed to fulfil the needs of local retailers by improving both the fabric of their premises and the ability of the proprietor to increase footfall, turnover and profitability.

12. Castle Lane Opportunity Site (Lurgan) – an area between Castle Lane and Windsor Avenue (to the rear of Market Street) identified as having considerable latent development potential. The Council and the DSD are exploring feasibility prior to issuing a development brief.

13. Tourism & Events – town centre marketing, events and promotions have been well supported by the chambers of commerce and local business, with a busy and varied programme of events planned for the future.

14. Town Centre Management – the Council is continuing to work closely with key representatives, retailers and chambers to ensure the ongoing development and promotion of each town centre.

Clearly, partnership working is focusing considerable effort and resources on projects and programmes that recognise current challenges, but importantly are also seeking to remove barriers and enable development and investment that will make the town centres of Portadown, Lurgan and Central Craigavon an attractive proposition.

The Chair of Craigavon Borough Council’s Development Committee, Councillor Carla Lockhart, commented: “The collective critical mass and shared assets of the borough represent an opportunity to achieve transformational change. With the second largest urban population in Northern Ireland and a genuine aspiration to achieve city status, Craigavon Borough has grounds to be confident and ambitious. By building strong and effective partnerships, each town centre can further develop their respective roles in a complementary manner that draws on regional accessibility and harnesses collective strengths, while retaining individual identity.”