A rise of payrolled employees in Northern Ireland above pre-pandemic levels may be masking a potential wave of redundancies and an absence of recovery for the self-employed, writes David Whelan.

At face value, a 2.6 per cent annual rise in the number of workers in Northern Ireland to 757,200 in June 2021 is welcome news. The figure puts the number of employees receiving HMRC PAYE above pre-pandemic levels recorded in March 2020 and the 1.4 per cent monthly rise from May to June in 2020 suggests an increasingly improving picture.

However, caution is urged in using these figures as a measurement of the strength of the recovery of Northern Ireland’s labour market.

The Northern Ireland Statistics and Research Agency’s (NISRA) latest report uses HMRC payroll data and is seen as the most-timely and best single, overall indicator of the labour market but remains, by its nature, retrospective in its outlook.

A number of reasons lie behind the need for caution. Firstly, payroll figures include furloughed employees, estimated at around 60,000 at the end of October.

Additionally, while payrolled employee numbers may have increased over the year, in the same time period, Northern Ireland witnessed its annual record total of confirmed redundancies since 2001.

A trend of increasing numbers of redundancies is set to continue. A rise from 150 proposed redundancies in May 2021 to 490 in June and to 850 in just the first two weeks of July is evidence of an evolving labour market and these figures are likely to be compounded by the proposed ending of furlough.

Employers have had to pay 10 per cent of their furloughed workers’ pay since 1 July but that is set to rise to 20 per cent in August and September before the scheme is removed entirely. Concerns have been raised that thousands of jobs currently retained under the furlough scheme could disappear then, either because they are no longer viable or because staff have moved to another job.

Official redundancy figures only include cases of companies making at least 20 people redundant and so do not capture the whole picture, particularly in a time when small-to medium-sized businesses appear to be hardest hit by restrictions. 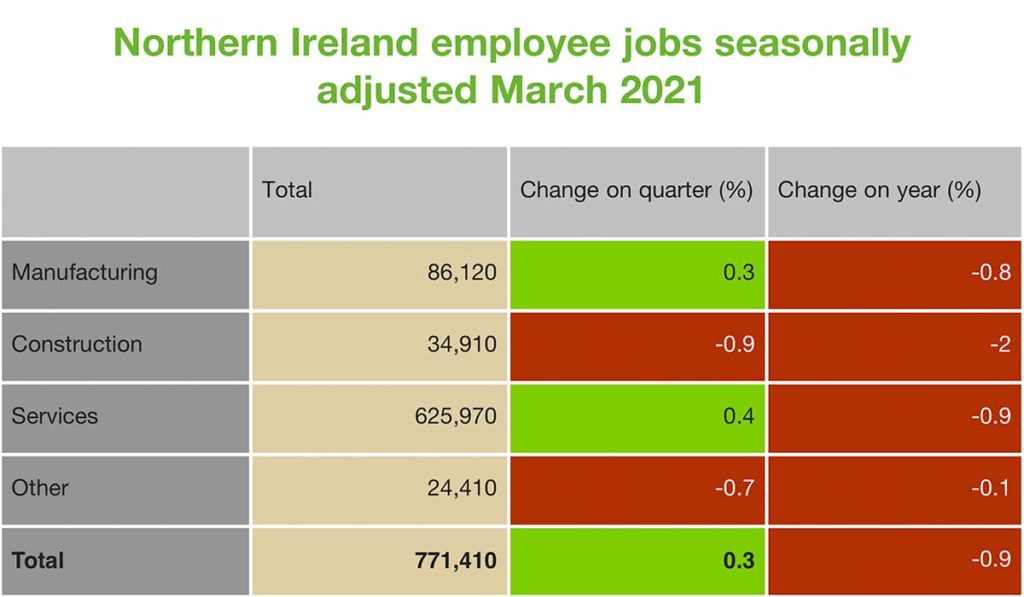 Further indication that the labour market’s recovery to pre-pandemic status may take some years is a 3.6 per cent increase in the unemployment rate over the year from March to May 2021. Additionally, Northern Ireland’s employment rate (the proportion of people aged 16 to 64 in work) decreased over the year to 70.3 per cent.

A 13 per cent rise over the year of the total number of weekly hours worked in Northern Ireland is also a positive indicator but should be read in the context that this figure remains 7 per cent below pre-pandemic value.

While some recovery in the labour market is evident from the height of the pandemic, self-employment appears to be showing no signs of recovery. The estimated 96,000 people self-employed in the quarter March-May is a significant decrease from the 131,000 recorded in the same quarter in 2020.