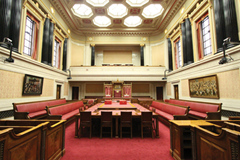 Owen Polley sums up the debate around an Assembly opposition, and how it could take shape.

With a Stormont election less than two months away, Assembly reform has become a live issue in the campaign. UUP leader Tom Elliott recently unveiled his party’s proposals to cut the number of MLAs and deliver a government and opposition by 2015. Meanwhile, the DUP is set to announce its plan to slim down the Assembly and form an Executive by voluntary coalition.

The idea that Stormont needs a stronger opposition has been around for a while. Currently only five out of 108 Assembly members belong to parties outside the Executive.

Critics of the existing setup believe it doesn’t encourage scrutiny of Executive decisions or collective responsibility among ministers. Rather than run the d’Hondt system, where qualifying parties nominate ministers based on their strength in the Assembly, they argue that a government should be formed voluntarily.

Under the Westminster model, non- Executive parties would appoint shadow ministers to form an ‘official opposition’, though there are alternative systems. It’s often argued that opposition parties should at least get special funding, in order to challenge effectively ministers with the resources of the Civil Service at their disposal.

Before the system can change, nationalist scepticism about the need to re-jig power-sharing institutions must be overcome. While the UUP envisages a four-year process to phase in voluntary coalition, it suggests a transitional arrangement, with parties negotiating a programme for government before the Executive is formed. D’Hondt would still operate, but to encourage purposeful, co- operative government, Ulster Unionists say broad aims for departments should be agreed in advance.

That could tempt the SDLP, which agrees with Ulster Unionists that smaller parties are marginalised in an Executive dominated by the DUP and Sinn Féin. For the moment it insists that the ‘spirit of government’ is broken, rather than the system, but former leader Mark Durkan has spoken about a need to remove ‘ugly scaffolding’ which prevents Stormont working properly.

The party is wary that voluntary coalition could be used to exclude nationalists from government. That is a concern unionists are keen to address. DUP leader Peter Robinson argues that “it is impossible to imagine” a system where key decisions are taken without cross- community support.

Sinn Féin is not convinced and remains implacably opposed to changing the current arrangements. It accuses unionism and even the SDLP of conniving to dilute checks and balances established by the Good Friday Agreement. The party is anxious that an opposition might encourage unionists to attempt to lock republicans out of government for good.

It’s true that the DUP is unlikely to relish forming a coalition with Sinn Féin without political cover from other parties. Robinson champions a voluntary system, but he could struggle to sell government with republicans to his party’s supporters, if it faced an opposition comprising Ulster Unionist or SDLP MLAs.

An agreed opposition system remains improbable. Of the five current Executive parties, the DUP, UUP and Alliance see voluntary coalition as desirable, while the SDLP is sceptical and Sinn Féin vehemently opposed. The best bet for a bolstered opposition during the next Assembly is if one or more parties simply pulls out of the Executive or refuses to nominate ministers.

The Ulster Unionists’ proposals certainly raise that possibility. Assuming the UUP has enough MLAs after the election, will it join the Executive if it can’t endorse a Programme for Government? And if other parties refuse point blank to negotiate before running d’Hondt, will the UUP enter opposition as a matter of principle? The Alliance Party is committed to holding the Executive’s justice ministry until 2012, but could the SDLP be tempted into voluntary opposition too?

That would certainly add a new and unpredictable ingredient to devolution in Northern Ireland. Some argue that it could prove the first step towards a better, more accountable system while others believe it would destabilise and endanger the institutions. That debate is likely to rage until polling day and beyond.

Owen Polley is a freelance journalist, writer and blogger.