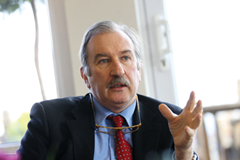 Why are we debating the issue of rebalancing the local economy? There are at least seven good reasons why:

• First of all I should be clear to most readers of this magazine that our existing economic development policy is not working effectively as can be seen all too clearly in the local labour market.

• Secondly the structure of the Northern Ireland economy has become almost clinically dependent upon public expenditure. Almost a third of all direct jobs in our economy are in the wider public sector and a further third of all jobs are dependent upon the downstream effects of the public sector jobs. Furthermore the ratio of total public expenditure to GVA in Northern Ireland is well above 60 per cent.

• The export-oriented business sector here accounts for a relatively small part of our total economy and therefore needs to grow rapidly.

• Our prevailing industrial development model which is based on relatively generous grants to businesses and inward investors is likely to be terminated within the next few years by the European Commission.

• An alternative industrial development model that is capable of delivering a modern, technology-based, high value adding economy is therefore required.

• There are two quite distinct corporate tax regimes on this island. Northern Ireland’s industrial development has been hampered for decades by our inability to compete with the low corporation tax regime in the Republic. If any proof of this is required one only has to look at the 78 projects and over 7,000 high-quality jobs that IDA Ireland attracted in 2010. Almost none of these investors looked seriously at locating in Northern Ireland. In fact one notable company, Warner Chilcott, which has been closely associated with the Craigavon area since the early 1980s, chose to locate its new European headquarters in Dundalk.

• Finally while considerable media attention has been given to the public sector indebtedness and the financial bailouts for Greece, Portugal and the Republic of Ireland, it should be noted that Northern Ireland runs an annual fiscal deficit of over £8 billion or

26 per cent of GVA. Our bailout puts the troubled eurozone countries in the shade. Our fiscal position has not been sustainable for many years and it is time now to lay the foundations of a more prosperous economy that is capable of sustaining higher levels of economic welfare and living standards into the future.

How is the rebalancing of the economy to be achieved? The fundamental issue is not about cutting the level of public expenditure as some commentators have argued; rather it is about how to rapidly grow the private sector in Northern Ireland. There is overwhelming evidence that low rates of corporation tax are effective in both attracting higher technology inward investment and in stimulating growth in indigenous businesses.

Much of this evidence can be seen south of the border where, despite the meltdown of public finances and the EU- IMF bailout, exports rose by 8 per cent in 2010 and manufacturing output is still growing strongly. IDA Ireland has attracted 38 projects and 3,700 jobs during the first six months of 2011 – proof if it were needed that, in the face of serious fiscal and macroeconomic difficulties, the Republic’s low taxation regime remains effective.

Northern Ireland can take control of its own corporate tax regime and set its own rate of corporation tax if it satisfies three conditions:

1. It must be politically and administratively autonomous;

2. It must have devolved power in respect of corporate taxes; and

3. It must bear the cost of any loss of corporate tax revenue to the Treasury resulting from a reduction in corporate tax rates out of its own resources (i.e. the Northern Ireland block).

On the issue of cost, the calculations set out in the Treasury’s consultation document are based on estimates and as such cannot be relied upon to give a true reflection of the cost of cutting Northern Ireland’s corporate tax rate from 25 per cent to 12.5 per cent. The Treasury estimates that the revenue loss from existing Northern Ireland companies who currently pay corporation tax and who will pay less than the rate falls to 12.5 per cent is £225 million. All the additional revenue effects set out in the Treasury document are speculative guesstimates rather than solid estimates. For example the Treasury estimates that around £50 million will be due to what is termed tax motivated incorporation (TMI) – that is profit shifting from companies in Great Britain to take advantage of the lower rate in Northern Ireland.

The table above uses figures set out in the Treasury document to argue that the net cost to Northern Ireland will be much lower. As in any financial negotiation, each side will attempt to achieve the outcome that is most favourable to them. So far in the public debate about the cost of lower corporation tax for Northern Ireland only one side of the argument (i.e. the Treasury side) has been heard. The calculations set out above imply a net cost of less than £100 million or around 1 per cent of the total £10 billion public expenditure block. To put this in context, if a business could achieve a transformation in its performance by sacrificing 1 per cent of its working capital, would it even bother to debate the pros and cons of the issue?

Are there alternative strategies for rebalancing the economy? Opponents of a lower corporation tax regime point to lower R&D tax credits as a more effective mechanism for growing the private sector. The research evidence on the effectiveness of R&D tax credits is inconclusive. At best they take many years to work and, in the case of Northern Ireland, there is a distinct lack of companies capable of undertaking meaningful R&D.

The trade union movement has been vocal in its opposition to lower corporation tax. Its preferred solution is to call for greater levels of public infrastructure expenditure and public investment in training and education. While these may be desirable outcomes they are totally out of step with the context of austerity in public expenditure, particularly in Northern Ireland.

In conclusion, Northern Ireland has reached a fork in the road and must choose a new direction in which to travel. The choice is whether to continue to travel in the same direction of low productivity, low wage growth and increasing fiscal dependence upon the rest of the United Kingdom or whether to embark upon a different route that may be bumpy and difficult at first but which can lead to a more prosperous economic future.