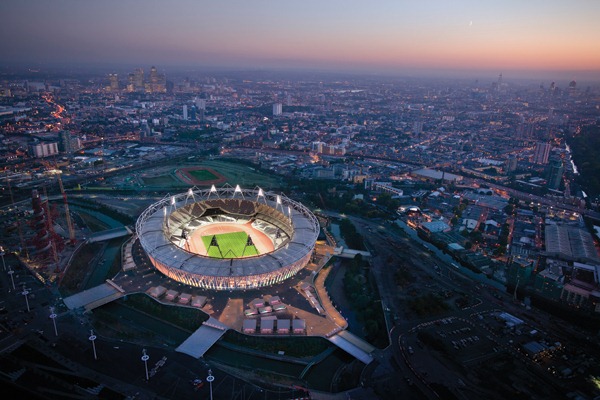 Our report outlines the Northern Ireland athletes announced to date, looks back at the torch run through Northern Ireland and Dublin (2-7 June) and profiles the nations and teams coming to the province’s training camps.

Some older people will also remember the last London Olympics in 1948, the first peacetime games after World War Two in which seven local athletes competed.  The forerunner of the Paralympics also took place that year, at the Stoke Mandeville Games for the Paralysed, organised for British war veterans with spinal cord injuries.
The first athletes will arrive at the Olympic village on 16 July and the flame arrives in London four days later.  Football will kick off early with fixtures outside the capital: women’s games at Cardiff, Coventry and Glasgow on 25 July, and the first men’s game following the next day at Old Trafford.

Opening ceremonies will feature 15,000 performers with an anticipated audience of four billion viewers looking on.  Beijing 2008 brought home five medals from four competitors, competing in both the British and Irish teams:

If used properly, the Olympic infrastructure has the potential to regenerate some of London’s most deprived areas.  Around 8,500 residents of the host boroughs have worked on the Olympic park and village.  Another six hundred will help to run the games.

Teams will travel outside London for football (in the cities mentioned above and also Newcastle), sailing in Weymouth, mountain biking in Essex, rowing at Eton Dorney, Paralympic road cycling at Brands Hatch and canoe slalom in Hertfordshire.

Northern Ireland has missed out on Olympic events due to the cancellation of the Maze stadium and the delayed upgrading of Windsor Park.  However, the World Police and Fire Games (1-10 August 2013) will be an opportunity for Belfast to show how it can organise a major international sporting event.

Olympic events will be broadcast on Belfast City Hall’s ‘live site’ screen throughout the games.  Super Saturday (4 August), when the largest number of medals will be won, and the men’s 100m final on 5 August will be two key highlights.

Organisers expect the Olympics to keep within its £9.3 billion budget, a substantial increase on the original £2.4 billion estimate.  The cost, though, may reach £11 billion when the final security bill is factored in.

The British Olympic Association wants to see Team GB “win more medals across more sports for over a century,” Chief Executive Andy Hunt has explained.  Its research, based on 2011 world-level performances, predicts a sixth place for Britain in the medal table with 59 medals across 13 different sports.

Hunt wants to “protect” as many of those potential podium finishes as possible and convert more medals into gold, a major challenge given the unprecedented number of competing countries and China’s tactic of saving its best sportspeople for the Olympics alone.

Stephen Martin has a unique perspective as a British gold medallist and now the Chief Executive of the Olympic Council of Ireland.  Martin was part of Great Britain’s winning hockey team at Seoul in 1988, which had taken bronze at Los Angeles four years earlier.

The Soviet Union’s boycott cleared the way for Britain’s qualification in 1984; the hockey team was initially eighth place in the rankings.   The team spent the next four years in preparation, becoming second in the world by the time the Seoul games started.

“We didn’t necessarily know how good we were,” he told agendaNi, “but to win on any given day sometimes is destiny.”  As the final against West Germany approached, the German side’s talisman was injured and Britain went in “very confident that we could beat them.”  Fellow Northern Ireland player Jeremy Kirkwood was also present when they won 3-1.

“It was just awesome,” Martin recalls.  “Hockey at that time was such a success story and it raises the whole profile of a sport.”  Martin retired from international hockey after playing at Barcelona in 1992.

On the Olympics’ scale, he points out that a sportsman “can go to Europeans or worlds in your own sport and generally there’s not a huge amount of coverage.”  However, an Australian hockey player at Seoul considered the Olympic gold to be worth 10 world cups.  “If you want to win any medal in any major championship,” he concludes, “that’s the one you want to win.”