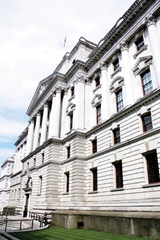 With the emergency Budget looking to cut the deficit, Owen McQuade looks at the risks of such deep cuts in stalling the economic recovery.

George Osborne claimed that this tough Budget was “unavoidable”. The fiscal tightening, which is some £40 billion tighter per year than that laid out by his predecessor, is his choice. The Budget also laid out plans to reshape the drivers of future economic growth with the rebalancing of GDP growth away from debt and government spending towards exports and business investment, two factors that will be influenced heavily by the performance of the global economy.

Perhaps the single biggest challenge to delivering the spending cuts will be the ring-fencing of the health sector in England. By isolating health from any cuts this means imposing cuts on other departments averaging 25 per cent by 2014-2015. These cuts will be difficult to deliver politically, particularly in a coalition government.

With health continuing to consume resources and such large cuts difficult to make in other areas such as defence and education, Osborne will have to look at possibly making deeper cuts in welfare payments, which might be too far for the Liberal Democrats. The 22 June Budget projected £11 billion worth of cuts to welfare benefits.

Osborne is betting that if the state steps back, businesses will grow and invest with increasing exports and employment. After a six-quarter recession excess capacity and the bank’s reluctance to lend could dampen investment by the private sector.

Lower public sector spending and tax increases will do little to help local consumption and with the rest of Europe embracing similar fiscal cuts there is a risk that the UK’s main trading partner will be struggling.

The focus of this Budget is to seek approval from the bond markets in eliminating public borrowing. Many commentators have highlighted the risk that with the signs of recovery still very weak, such a fiscal retrenchment could lead to a double-dip recession. A week after the Budget, a leaked Treasury report had estimated that its impact would lead to the loss of 1.3 million jobs across both the public and private sectors.

Much has been made of the experience of other world economies. Those opposed to such severe fiscal retrenchment point to the experience of Japan in 1997, which showed that cutting the deficit when the private sector is deleveraging undermines economic growth. Canada’s experience in reshaping its economy has been highlighted by the coalition government, but Canada was able to grow exports because of a growing global economy.

The impact on Northern Ireland will be overall negative. The local economy will be hit harder than other regions with the £11 billion cuts in welfare benefits as Northern Ireland has a higher proportion of its population claiming benefits. With a relatively large proportion of the workforce employed in the public sector, many will have to endure a two-year pay freeze. The impact of the VAT rise will be to reduce the attractiveness of Northern Ireland for cross-border shoppers.