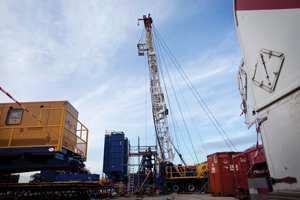 It is “incumbent” on the fracking industry to be “transparent about the procedures, methodologies and techniques that they are going to use and to ensure that they use best practice from start to finish,” Tiernan Henry tells agendaNi. The Republic’s Environmental Protection Agency and the Geological Survey of Ireland, in turn, must ensure that “proper regulations are in place before any work begins” and that they are properly enforced. The Northern Ireland Environment Agency and the Geological Survey of Northern Ireland are the province’s equivalents.

Addressing a gas futures seminar, Henry pointed out that anecdotal information, mainly from the United States, is often unchecked by the proper environmental authorities and can lead to a panicked public.

Fracking is “a methodology to stimulate the production of hydrocarbons from unconventional gas resources,” Henry explains. “Essentially, it is stimulating the ground to allow gas to be taken out much more easily than it would already do if you just drilled straight into it.”

It is a growing phenomenon and is seen as increasingly important to the United States’ energy security. Unconventional gas development made up 28 per cent of US total gas production in 2008 and is predicted to be up to 60 per cent by 2035.

“Fracking is obviously an important means of accessing natural gas resources. It’s not going away [as] it’s being developed as a major way of extracting gas from the ground,” Henry notes.

Gas companies will “drill to a particular depth in the sub-surface to particular rock types  that have an established gas resource. But, because of the nature of the rock, the gas can’t move easily through the rock so it has to be stimulated … by breaking it or fracturing it.” Operators will then inject water into the rock under very high pressure. Proppants such as small sand grains are added before the water is injected. “These proppants hold the fractures open. The water is drawn back up the system and the gas follows,” he summarises.

Shale rock must contain more than 2 per cent of total organic content, be more than 40 metres thick, be between 1,000 to 3,500 metres deep, and have a surface area greater than 100 square kilometres.

Because shale is ductile, and bends rather than breaks, industry needs a “shale dominated rock” which contains clay or sand particles to make it brittle.
Concerns about the amount of water required for fracking are unnecessary, particularly in Ireland, which has a lot of rainfall.

“Per fracture, on average, the volume of water needed is 10,000 cubic metres [which is around 3-4 million gallons of water],” Henry says. “These numbers seem quite large but relatively speaking they are very small numbers.”

Putting that in perspective, he explains that the River Corrib in his native Galway, flows at approximately 100 cubic metres a second. “To take out 10,000 cubic metres would be 100 seconds of flow from the river,” he analogises. Alternatively, 10 seconds of flow could be taken out over 10 hours to make the withdrawal more gradual.

While water generally makes up 90 per cent of the fluid pumped down the well, 9.51 per cent is proppants and 0.49 per cent additives. Additives are controversial and the type used depends on individual fracking companies.

They can include KCL (potassium chloride) which stops the clay in the shale from swelling, biocides which kill off bacteria that could clog the system, and scale inhibitors to stop the breakdown of the metal in the piping itself. The US Environmental Protection Agency has outlined a list of chemicals found in fracking fluid which runs to 25 pages.

While some irresponsible fracking companies have engendered “valid concerns about the environment”, particularly in relation to the storage of contaminated water, Henry points to a University of Texas February 2012 report which stated that “there is no conclusive evidence that hydraulic fracturing itself is a cause of problems.”

Written by the university’s energy institute, the report is called ‘Fact based regulation for environmental protection in shale gas development’. Examining the Barnett shale in Texas, the Haynesville shale in East Texas and Louisiana, and the Marcellus shale in several states in the eastern US, that report found that there is presently “little or no evidence” of groundwater contamination from hydraulic fracturing of shales at normal depths. However, the process of adding chemicals to the water occurs above ground and can result in undiluted chemicals making their way into surface or ground water.

The report also found that water quality changes observed in water wells (and often blamed by the public and the media on fracking) may be due to vibrations from the drilling process releasing chemicals such as iron and manganese. These are already present in water wells, it claims, and it is unlikely they are released from fracturing fluids or leakage from the well casing.

In conclusion, Henry believes that “the biggest issue … is communication and the quality of the debate about the merits or otherwise of the process [which has] been quite polarised to date.”

Exclusive interview with Tiernan Henry of NUI Galway from the Future of Natural Gas seminar,
27 March 2012.