From a starting point of the only part of the UK without climate change legislation, Northern Ireland is now in the unique position of having two parallel bills progressing through the Assembly. David Whelan talks to Green Party NI Leader Clare Bailey MLA about her Private Members’ Bill and its implications for the Environment Minister’s planned legislation.

Bailey is adamant that her priority is to see a climate bill signed into law before the end of the current Assembly mandate in May of next year. “This is not a competition,” she stresses. “I am not in a standoff with Minister [Edwin] Poots or the Department [of Agriculture, Environment and Rural Affairs]. Everyone is agreed that we need a climate bill, and we need to do everything we can to ensure we get there.”
While the Green Party NI Leader stresses that she has worked and will continue to work with every interested party and stakeholder in ensuring Northern Ireland gets a climate bill across the line, it is evident that progress of her Private Members’ Bill is causing a headache for the Department and the Minister.

Poots has been critical of the Private Member’s Bill and expressed his “disappointment” at its passage through the Assembly to committee stage in May 2021. His Climate Change Bill was only introduced on 5 July and is expected to enter second stage in September, when the Assembly resumes from its summer recess.

The introduction of dual bills follows a commitment in the New Decade, New Approach agreement of January 2021 for the Executive to deliver a Climate Change Act, with an independent environmental protection agency overseeing the work. In one of its first sittings following its restoration, the Assembly voted to declare a climate emergency, and in July, the Assembly passed a motion calling for the introduction of a climate act within three months. The Minister called the timeframe “ridiculous”.

Bailey says that Minister’s lack of urgency to produce a bill sparked the creation of the Private Member’s Bill.
“I asked myself, is 100 days to produce a climate bill really an impossible timeframe? The time for debate has long gone. Northern Ireland is in a really bad place in terms of climate mitigation and our resilience. The longer we leave this, the more radical, drastic and deep mitigations will have to be,” says Bailey.
Bailey was the lead sponsor of the Private Members’ Bill brought forward in March, which received cross party support and was drafted by the Climate Coalition Northern Ireland, a “coalition of academics, lawyers, environmentalists, NGOs and youth organisations”.
Environment Minister Poots then introduced his Climate Change Bill to the Assembly in July, after it received approval from the Executive in June.

Asked whether she felt the presence of two bills progressing through the Assembly, with a narrow window until the end of the mandate, might be detrimental to the progress of both, Bailey says: “It is a massive concern and is why I, and the other sponsors of this bill, have always said that we are willing to work with anyone to make sure this mandate does not end without Northern Ireland having a Climate Act. Whether that is a Private Member’s Bill or a departmental bill is not important but what is important is that we have a bill that is fit for purpose and has the best outcomes.”
The two bills differ significantly. Whereas Bailey’s bill puts a target of net-zero emissions in Northern Ireland by 2045 and establishes a legal framework, including five-year plans for emissions cuts, the Department’s Bill is guided by the UK Climate Change Committee’s advice, which sets out an at least 82 per cent reduction of greenhouse gases in Northern Ireland by 2050, as a “credible and fair” contribution to the UK’s net-zero target.

I think it very unfair to set targets for sectors if we do not even have proper evidential baselines for where they are currently and how they are going to start moving forward.

The Environment Minister has been outspoken about the Private Member’s Bill, claiming that it had been developed “without any regard to either the long-term sustainability of our hard-working agri-food sector, nor the long-term achievability of the environmental targets and commitments contained within the Bill”.
Bailey says that the Minister’s criticism is “another indicator of how far behind Northern Ireland is” in relation to addressing climate change. “The time for talking is done, we need to act,” states Bailey who highlights that her bill predated the advice of the Climate Change Committee.

Accusing the Minister of “playing politics”, Bailey says that moves to lessen Northern Ireland’s decarbonisation ambitions does not mitigate a global shift to net-zero. She suggests that Northern Ireland’s attractiveness for global finance and its involvement in corporate supply chains may be weakened if the region is identified as falling below a net-zero ambition.

Bailey accepts that the Minister’s Bill is targeting a greenhouse gas reduction of “at least” 82 per cent, keeping the door open for the region to go further. “I understand the Minister wanting to be part of this overarching UK net-zero target but how that fits specifically into a Northern Ireland context in terms of the impact on future trade, business and finance opportunities, needs to be teased out.
“The priority is to see a bill passed in this mandate and so I’m happy to discuss the net-zero target. However, what I would say is that I want to see net-zero, the political support exists for net-zero, and it is the way the world is moving.”

While perceiving Northern Ireland as a climate laggard in comparison to neighbouring countries, Bailey defends her Bill’s ambitious target of 2045 for net-zero emissions.

The Green Party leader believes that COP26, which is set to be staged in Glasgow later this year, will be a platform on which many countries increase their decarbonisation ambitions and suggests that the 2050 target may become “redundant” soon.

Explaining that the Bill’s 2045 target was based on precedent being set in other countries, including Germany, she states: “The bottom line is that we need to move fast and far. Northern Ireland is not even doing its fair share right now.
“Setting an ambition will enable all sectors to mobilise towards that target. Addressing climate change is not the work of one department. It needs a joined-up approach and I believe establishing an ambition in legislation will aid that.” 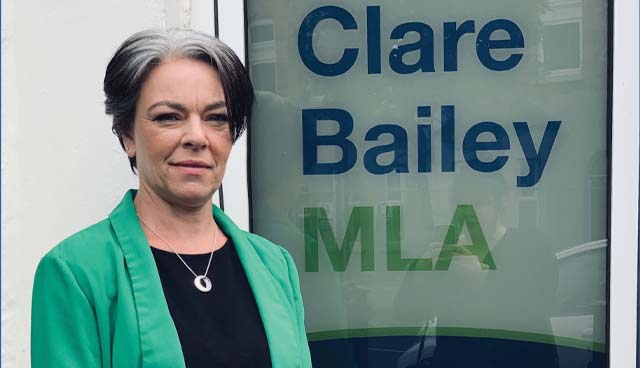 Northern Ireland is in a really bad place in terms of climate mitigation and our resilience. The longer we leave this, the more radical, drastic and deep mitigations will have to be.

Asked why the Bill had steered away from setting sectoral targets, Bailey says: “We are not building the road. We are showing the destination and allowing the road to be built accordingly. Some sectors are ready and in fact, are being held back because we do not have legislation. However, others will take longer and that should be okay, given that we are all working to the same trajectory.”
The Bill puts an onus on the Executive to prepare a Climate Action Plan at five-year intervals (the initial interval being three years) with annual targets, carbon budgets, nitrogen budgets and sectoral plans. Bailey believes that these plans will not only facilitate democratic oversight but also allow for flexibility within individual sectors.

The instalment of an independent climate commissioner and climate office, she hopes, will not only monitor the implementation of the climate action plans but will establish baselines for each sector.
“I think it very unfair to set targets for sectors if we do not even have proper evidential baselines for where they are currently and how they are going to start moving forward,” explains Bailey.

Another criticism levelled at Bailey’s Bill by the Minister was around consultation. When critiquing the Bill in May, the Minister noted the “lack of consultation, whereas I undertook a proper consultation”. Bailey is quick to point out that the Executive is mandated to go to public consultation, whereas a Private Member’s Bill is not.
However, she highlights the participation of the majority of political parties in developing the Bill alongside the involvement of the Climate Change Coalition in Northern Ireland, whose members represent over 390,000 people across Northern Ireland. Additionally, she says that the Bill, which is now at committee stage, is open to oral and written submissions.
“We have and will continue to seek as wide an input into the shape of legislation as possible. The Bill remains open for consultation,” she says.
On whether, as has been claimed, the Bill’s targets risk disengaging farmers, Bailey says; “Farmers are often talked about as a generic group and that is not the reality. A lot of farmers I have talked to want to see legislation in place. They know they have a responsibility and are crying out for the polices and resources to do their bit.
“Yes, farming practices will be impacted but this is not just a farming issue, we need society-wide behavioural changes. The more we seek to pit one sector against another, the more we weaken the collective message.”

Asked whether she is confident a climate change bill will receive the resources needed to deliver on ambitions, she says: “We cannot afford not to do this. Climate change is happening and the longer we leave addressing it, the greater the economic costs.”
Bailey says that the pandemic response from government is evidence that finances can be shifted to mitigate a crisis, outlining her belief that the climate crisis is the largest ever faced by humanity.

Considering whether there is enough time for her Bill to be enacted, Bailey is aware that Executive business takes priority. The three-and-a-half-year absence of an Assembly and an Executive means that a lot of Executive business will be squeezed into the remaining mandate, not least the Minister’s Bill. Excessive Executive business towards the end of a mandate often means little time is allocated to Private Members’ Bills and those bills already in the system risk falling.

Whether or not Minister Poots’ Bill passes second stage when the Assembly resumes in September will be a determining factor on what Northern Ireland’s climate legislation may look like.
“In September, we will hear the debate on the principles of the Minister’s Bill, and we will continue to speak to him. Time is of the essence,” she concludes.