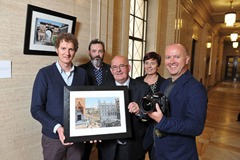 Divisions from the summer months carried over into Stormont’s autumn proceedings. Members, though, affirmed support for the emergency services and discussed a potential shared space in a new regional library.

While the Haass talks have been tasked to consider flags, parades and the past, Northern Ireland’s most serious divisions came to the floor of the House in a very public way in September. The tense debates about the Castlederg commemoration and loyalist disorder reflect strains in the DUP and Sinn Féin relationship which have been growing over the last year.

The month’s proceedings began with fitting tributes to Seamus Heaney and a welcome for the birth of Prince George of Cambridge. The first debate – on the treatment of tree disease – was uncontentious but the tone quickly became sharper when the events in Castlederg were discussed.

UUP Mike Nesbitt had warned that three debates in a row about division and the past over two days “could send out the wrong signal to those who are already disengaged from the processes of this House.”

More positively, members supported a proposal for a regional library in Belfast. Speaking in the debate on 17 September, Michelle McIlveen said that this would be “a clear statement that we see information, communication and education as key to the improvement of our community’s situation.” It would also send out the message that “we are proud of and wish to display the products of our rich cultural heritage, both shared and separate.”

Following on from the World Police and Fire Games, MLAs backed Karen McKevitt’s proposal for an annual day of recognition for members of the emergency services. She suggested Michaelmas Day (29 September this year) as St Michael is held to be the “protector and defender against evil … the patron saint for law enforcement.”

Topical questions have the potential to liven up Assembly debates. Until now, ministers’ answers have been drafted by civil servants several weeks in advance, meaning that they were sometimes out-of-date when answered in the House.

The dispute between Peter Robinson and Jim Allister, though, again lowered the tone of debate. The First Minister’s comments were condemned by all other parties. A letter from the solicitor administering the estate, released to the press, confirms that Allister has “not been involved in any way in the disposal of any assets” in the will.

The document had been witnessed by Arlene Foster, during her career as a solicitor, but she has denied passing information about its contents to Peter Robinson.

There is, as always, a way forward. Speaking to agendaNi, one MLA said that the solution lay in both of the main parties sitting down around the same table – separately from the Haass talks – and working through each other’s problems.

“They should ask each other why this causes a difficulty for the other side,” he said, “and then look at how they [the offending party] can resolve that difficulty.”

The Assembly rises for its Halloween recess on 25 October and returns on 4 November.