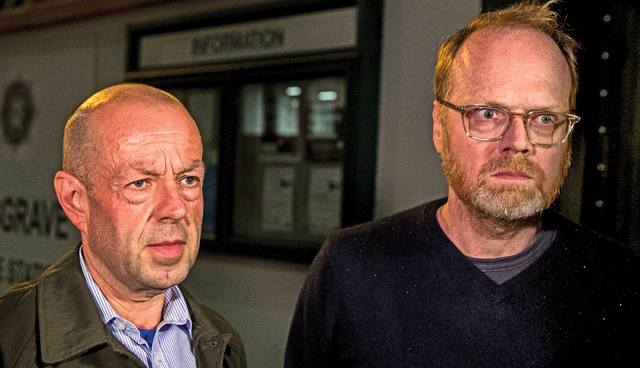 “It’s us today, tomorrow it could be you”. Those were the words of veteran journalist Barry McCaffrey as he addressed fellow members of the press outside Belfast’s Musgrave police station following his arrest along with colleague and co-accused, Trevor Birney.

The arrests of McCaffrey and Birney raise significant questions not only about the handling of the Loughinisland case, but also about the current state of press freedom.

The information allegedly stolen concerns the 1994 shooting of six civilians by the UVF in Loughinisland, County Down. The shooting, believed to be in retaliation for an INLA attack weeks previously, generated widespread revulsion in what has become an atrocity etched into Northern Ireland’s collective memory. Allegations of collusion between loyalist paramilitaries and the RUC have pervaded the case, with a quashed Police Ombudsman report, destroyed evidence and withheld information characterising a case which has gathered international notoriety.

Families of the victims condemned the arrests, with a spokesperson from the National Union of Journalists expressing “grave concern” and No Stone Unturned filmmaker Alex Gibney branding the events as “outrageous”. Whilst Gibney called for the Loughinisland case to be re-opened, representatives from Durham police and the PSNI claimed that the information, which was reportedly used in the documentary, “potentially put lives at risk”. The 2017 documentary featured several revelations surrounding the case, including claims that the RUC held intelligence about an imminent loyalist attack ahead of the murders, as well as the first-time naming of suspects to the public.

The pursuit of justice by victims’ families has met a number of obstacles which have sustained claims of collusion and subsequent coverups by the RUC, the PSNI and the British Government. These obstacles include the sudden disappearance of evidence attributed to “asbestos contamination”, as well as the destruction of the getaway vehicle only weeks into the investigation.

As the investigation continues, representatives from the Press Association have suggested that Birney and McCaffrey should seek legal cover with journalistic privilege, which is guaranteed under the Contempt of Court Act 1981. Section 10 of the legislation stipulates that the protection of journalistic sources is a necessary feature in any free and democratic society. However, there are exemptions to this rule where a disclosure of sources will be deemed necessary by the courts, including in the interests of justice, in the interests of national security or in the prevention of disorder or crime.

In previous cases, courts have been reluctant to order source disclosures and will usually only do so where vital public or individual interests are at stake. Where national security is concerned, the necessity for disclosure of the source will be almost automatic – and it is this exemption which may apply to the cases of McCaffrey and Birney. Keeping information concerning national security confidential outweighs the right to keep the source confidential. Where public interest can be established in preventing disorder or a crime, source disclosure will be almost automatic.

Beyond the provisions of the Contempt of Court Act, journalists are also protected by Article 10 of the European Convention on Protection of Human Rights, which guarantees the human right of freedom of expression and plays a pivotal role in ensuring that confidential journalistic sources are afforded appropriate protection.

Officers from Durham Constabulary and the PSNI searched businesses and residential premises under Section 8 of the Police and Criminal Evidence Act, which allows police to search premises where an offence has been committed and there is certain evidence on the premises to assist with the investigation. However, police can only seize journalistic material, including confidential information, if they apply for a warrant under Section 9 of the Act. The PSNI must now demonstrate a legal justification for the searches as criticism mounts, with claims that the arrests and seizures amount to a violation of human rights and press freedom.

The extent of PSNI involvement in the arrest and questioning of the two documentary makers has prompted more questions over the independence of the investigation. Solicitors Niall Murphy and John Finucane have insisted that the PSNI took a prominent role in the day’s events – a claim which compromises the independence of the supposedly Durham-led operation. Despite claims that this was a PSNI-led operation, the use of a PSNI search warrant, the participation of PSNI officers in questioning and the involvement of over 100 PSNI officers contradicts this claim, according to the solicitors.

Condemning the arrests, Sinn Féin MLA and Loughinisland victims’ spokesperson, Emma Rogan, said: “The British Government has systematically denied and continues to cover up its role in the murder of six people in The Heights Bar. [The] arrests show the lengths of desperation that the British Government and state forces are prepared to go to, in order to stifle the truth about what happened in Loughinisland.”