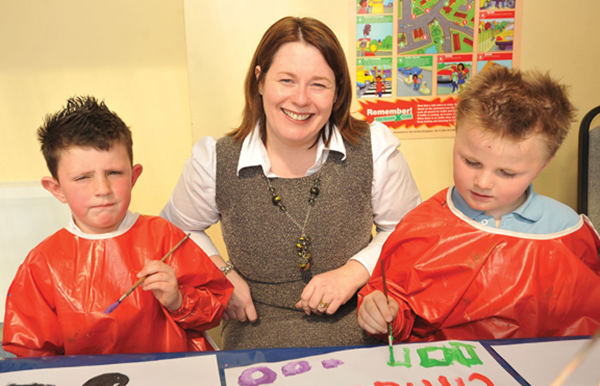 Women bring a fresh perspective to Irish politics but many obstacles stand in the way. Michelle Gildernew writes of her own experiences and suggests better child care, working hours and candidate selection as solutions to their minimal representation.

There is a very clear and outstanding issue that needs to be addressed across the island of Ireland but rarely mentioned within the corridors of power.

It is the under-representation of women in politics. Women make up over 50 per cent of the population of Ireland yet are only minimally representative of the complexion of the Oireachtas, Assembly, councils and those elected to Westminster.

Growing up, I had strong female role models and was engendered with a strong equality ethos. Therefore I was surprised to confront the inequalities faced by women when I entered the workforce and then the political arena. Because of the role models that I had growing up I expected that women would have been much more visible and assertive, but I quickly realised that it was not that simple for women to breach the obstacles that they were faced with in all walks of life.

After I was elected and my first child was born, I struggled to find child care and more, I then soon realised that women have distinct disadvantages in political life as they have in other employment areas.

That is why I believe that it is important that women get involved in public life, whether that is in community, local council or higher elected office. It is the only way in which we can influence the change required to remove the glass ceiling which for too long prevented women from breaking down the barriers. Women have a different perspective and make a unique contribution to all walks of life and should bring those attributes into the political arena.

I was first elected at 28 years of age, an MP at 31 and had my children after that. In politics I was determined to make a difference to the lives of women and in particular rural women. As a Minister in a male-dominated field, on my first day in office I initiated a rural child care strategy, recognising the barrier the lack of child care can be to women’s participation in public life in whatever sphere.

The group I set up carried out a study on the lack of child care and how it prevents women from either taking up employment, training or entering public life. I believe that child care, and indeed care and responsibilities in general that normally fall on women, are difficulties that we have to address. Other barriers include the reality of life inside political parties and the fact that many women may be put off by the confrontational nature of the current political debate.

The working hours faced by politicians are not conducive to the needs of most women. In local government many meetings are held in the evenings. It does not matter how well remunerated one is if you are going out the door as the children are coming in from school. This needs to be suitably addressed.

The Welsh Assembly, for instance, has a 9-to-5 working day, in order that it can make politics more attractive to women and as a result there has been an increase of women participating in public life. However in Westminster debates go on until 1 or 2am and in the Assembly some business lasts until late into the evening. For anyone with caring responsibilities, it is just impossible to get any type of balance in such a working environment. In Stormont there isn’t even a crèche!

Democracy requires that all political perspectives are represented and therefore we need more women in political parties. We need the party organisations, structure and management to fully support all members on a basis of equality. Any decision-making processes must involve women activists on an equal basis to men.

From the Sinn Féin perspective we actively seek to promote gender equality and balance throughout the party structures including the most senior positions. For example, our Ard Rúnaí (secretary) and leas-Uachtarán (vicepresident) are women and Bairbre de Brún is our MEP.

Sinn Féin has excellent examples of women giving leadership all over the country such as Toireasa Ferris, Kathleen Funchion and Mary Lou MacDonald just to name three. In the last Assembly elections we ran nine women; eight were elected which demonstrates the Sinn Féin commitment to gender equality. We have two out of five ministers and a number of committee chairs and vice chairs, including some on the most important committees.

Women have to be given responsibility and the opportunity to make their mark. This women leadership in senior levels of Sinn Féin is evident throughout the country but we need to do more to promote and encourage women in all walks of life to become involved. When Sinn Féin is choosing its candidates we tend to ensure that there are women in winnable constituencies.

As Minister for Agriculture and Rural Development I have endeavoured to improve the life of women in rural areas. We must show pride in being women and bringing that gender perspective to what we do, ensuring that we make conditions better for the women who come behind us.