New Economy Minister Gordon Lyons MLA speaks to David Whelan about recovery from the pandemic, plans to boost consumer confidence, Brexit frictions and a vision for a decade of growth.

Drafted in as new DUP leader Jeffrey Donaldson MP’s only immediate change to the party’s ministerial portfolios in the Executive, East Antrim MLA Gordon Lyons brushes off suggestions that he has an unenviable task in the context of an ongoing pandemic, Brexit tensions, and energy transition, all with less than a year to go to the end of the current mandate.

“It is an exciting time,” he states. “We have gone through a difficult time, and I hope the worst is behind us. It is now about not just getting back to where we were pre-pandemic but about setting the building blocks for future and long-lasting recovery and growth.”

Asked about his immediate priorities, the Minister says: “First and foremost we need to see a reopening of the economy. Getting rid of those restrictions that are still holding us back but then preparing for what comes next post-Covid and post-Brexit.”

To this end, the Minister points to two pieces of policy announced by one of his recent predecessors, Diane Dodds MLA, in the form of February’s Economic Recovery Action Plan, including the £290 million High Street Stimulus scheme, and the longer-term looking 10X Economy document, which the Minister describes as “a bold and ambitious vision for Northern Ireland’s economy”, focusing on “our strengths”, as well as identified key industries and sectors.

The 10X vision points to the likes of agri-tech, fintech, advanced manufacturing and engineering, and life and health sciences as areas of opportunity for Northern Ireland’s economy over the next decade. However, in the immediate term there are still some recognisable challenges in relation to businesses needing support to mitigate restrictions and the looming end of furlough at the end of September.

Lyons says that discussions are still ongoing with the UK Treasury in relation to the potential of sector-specific furlough, for badly hit sectors that will take longer to recover, after the possibility was raised by his predecessor but says that the focus must be on reopening the economy.

Pointing to his belief that the onus is on the Executive to rebuild confidence and in particular, consumer confidence, the Minister says that the High Street Stimulus scheme is an enabler.

“It is not just about a one-off payment to go on a one-off purchase. It hopefully builds consumer confidence over time, getting people on to the high street,” the Minister states, highlighting the benefits to this approach over “giving money directly to businesses to close”.

“I believe there is a demand there. We have to get back to normal and we have to help create those conditions,” he adds.

Asked whether he felt the right balance had been struck between mitigating the economic impacts of the pandemic and managing the public health crisis, he says: “It is difficult to say with a great deal of certainty that we definitely got the right approach. I certainly feel that businesses have taken the brunt over the last number of months, and it has been exceptionally difficult for them.

“I understand the frustrations people express to me when they ask, ‘what was the impact on health and did we really make a difference?’ because a lot of businesses have found that very difficult,” Lyons says.

“However, in terms of support, I think we did step in in many cases and we went further than the rest of the UK and Ireland with regards to the support that we offered. 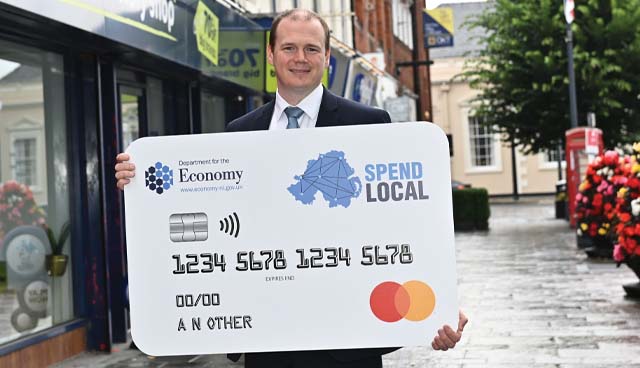 Turning to the longer-term ambitions, Lyons identifies the 10X vision as the overall economic vision that requires buy-in from a wide range of stakeholders. Going “hand-in-hand” with that vision is the soon to be produced Skills Strategy, the consultation on which closes in August.

Discussing the necessity for a focus on skills, Lyons explains: “There is no point having a 10X vision if we are not prepared to do the work to ensure we have people with the right skills. In focusing on those key areas and sectors, we need to ensure the people that we want to work in those industries have the skills to succeed.

“We want to stand out. We want Northern Ireland’s economy to be among the elite of the small economies in the world and that is going to require work. We have the people and the talent. Our job now is to ensure that they are properly skilled.”

Lyons admits that the pandemic has had an impact on the landscape of the labour market, particularly for certain industries. Using the example of a perceived exodus from the hospitality sector by some experienced and skilled workers into other sectors, he acknowledges that as well as looking to emerging sectors, some traditional sectors will require assistance in recruiting and retaining skills.

However, the Minister is also quick to point out opportunities presented by the pandemic. For example, a rise in flexible and remote working patterns lends itself to addressing regional imbalance, an ambition under the New Decade, New Approach agreement.

Asked whether he was confident the Department will have access to the necessary resources to deliver on its ambitions, in the context of other departments competing for a portion of the block grant, not least the Department of Health, Lyons says consideration must be given to the wider implications of investment in the economy.

“People who are in employment are generally healthier,” he states. “We have heard the Chief Medical Officer stating that they do worry about the economic consequences of Covid because it reflects on people’s health.

“Looking at the work we are doing in and around research and development, there is huge potential there to transform how we deliver healthcare and to support cutting-edge technologies to provide better health outcomes.”

The Economy Minister is adamant that future ambitions should not be viewed in the context of a departmental competition. “We need to be putting resources in the places where we get the best outcomes for investment,” he states. “This is not about health versus economy. It is about putting resources in the right place to deliver the right outcomes for the people we represent.”

The Minister reaffirms the need for a multi-year budget, highlighting the unsustainable nature of recent one-year budgets.

On what a multi-year allocation would offer, he says: “It will provide more certainty to the Department going forward. Our 10X vision is not a one-year document, it is a 10-year plan. Making sure we have a multiannual budget is crucial to delivering on our longer-term ambitions. We need longer-term thinking, longer-term planning and the requires longer-term budgeting as well.”

Having served in the Executive as a Junior Minister and as interim Agriculture Minister for a short period, since the resumption of the Northern Ireland Assembly, Lyons is well versed on the challenges presented by Brexit. In February 2021, the then Agriculture Minister sparked controversy when he ordered officials to halt construction of permanent inspection facilities for post-Brexit checks and further recruitment of inspection staff for the port facilities. He has consistently advocated for the Protocol to be removed.

Asked whether his opinion had changed upon taking up the Economy post, he says: “Do I still believe we can do better that what we have now? Yes, absolutely. The Protocol is causing huge frictions in the UK internal market and that is important not just from a political point of view but because it is our biggest market and we have integrated supply chains that have been disturbed.”

Lyons says that having listened to complaints from businesses since January, he believes a better arrangement can be agreed. In this sense, he says he is glad “there is the beginnings of an understanding” from the UK Government and “even an acknowledgement of the EU, in part”.

The UK Government, through its command paper, has asked for a renegotiation of the Protocol. However, while Brexit Minister David Frost has outlined his belief that the requirements to trigger Article 16 have been met, there is a clear reluctance to do so on the Government’s part. 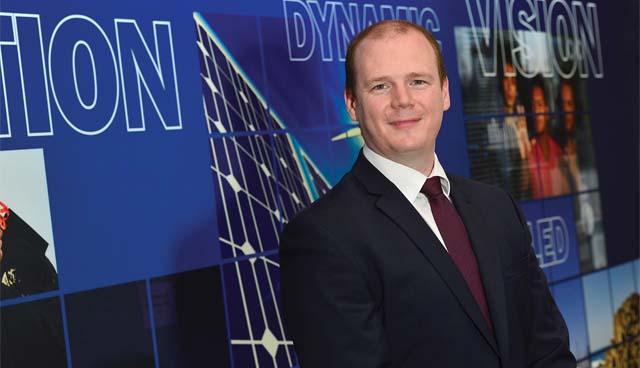 “Article 16 is part of the Protocol. It is in there for a reason. I do not believe the EU or the UK Government thought there were going to be the problems we are currently experiencing.”

The Minister explains that while he would like to see a quick renegotiation, he doesn’t believe the UK Government’s command paper places the “impetus” on the European Union to return to the negotiating table.

“If they [the EU] are not prepared to recognise the problems and they are not prepared to offer anything more than piecemeal solutions, then they need to come back to the table. If Article 16 is the way to force that, then it needs to be done,” he states.

Highlighting that the UK Government have set out the reasons why the triggering of Article 16 is now appropriate, he adds: “Article 16 is part of the Protocol. It is in there for a reason. I do not believe the EU or the UK Government thought there were going to be the problems we are currently experiencing.”

The triggering of Article 16 risks ensuing a lengthy legal battle between the UK and the EU and another period of uncertainty for businesses in Northern Ireland who have endured years of uncertainty since the Brexit referendum. It also risks a further breakdown of relations and, potentially, a collapse of the current agreement which protects Northern Ireland’s place in the single market and an open border on the island of Ireland.

Asked if he believed this was a risk worth taking, the Minister states: “There is a risk of those things happening versus the reality of what is actually happening now. People talk about the potential risks to the single market or to the border on the island of Ireland but what we are facing right now is the reality of trade between Great Britain and Northern Ireland, Northern Ireland’s biggest trade partner, being disrupted.

“There is a risk to businesses and that is before we have any diversion and the end of grace periods. Once we move beyond that, we are in an even more difficult situation.

“There is a whole set of issues, some we are facing now and some we will face in the future, compared to the possibility of what might happen. The EU and the Republic of Ireland have made it very clear for a long time that there is not going to be a border on the island of Ireland and if that is the case then why don’t we do something to sort out the disruption in trade between Northern Ireland and its biggest partner.”

Asked to outline what tangible success might look like for his department with less than one year left of the mandate, the Minister points to the delivery of an Energy Strategy, the roll out of the High Street Stimulus scheme, progress under city deals and a continuation of work under the 10X vision and its associated documents, as key areas.

“Ideally, by April or May [2022] it would be great to say the worst effects of the pandemic are over and we are now on a pathway to growth. That is where I would like to leave the Department at the end of the mandate,” he concludes. 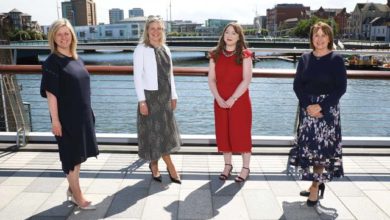