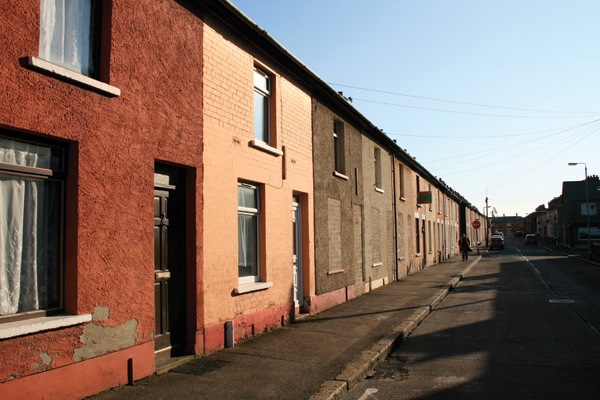 After a long decline, things are looking up for South Belfast’s Village area, as residents tell Peter Cheney.

Over recent years, the Village has been in the news for its poor living conditions but now a corner is being turned for the better. The ‘Greater Village’ takes up a western corner of South Belfast, mostly between the Donegall Road and Tates Avenue; around 5,000 people call it home. The heart of the area lies between Glenmachan Street, Donegall Avenue and the two above roads.

agendaNi visited the Village during March to find out what local people thought about the plans to demolish and rebuild much of the area’s housing. Sharon Stewart and Ann Crowe met the magazine at the Greater Village Regeneration Trust’s offices on the Donegall Road.

Sharon and Ann were both born and bred in the Village and feel a deep pride in the area. They wouldn’t live anywhere else. Ann did move away when she got married but was back again two and a half months later.

Ann is a domestic worker in the Royal Victoria Hospital and Sharon cares fulltime for her son.

Ann explains that while there is a community, it’s not what it used to be. Many properties have been bought up by private landlords and rented out to students and immigrants. There is, meanwhile, little family housing for local people.

“A lot of young families have moved away, not because they wanted to but to get the housing that accommodated their family needs,” she adds.

“It’ll not be sorted until we get this regeneration up and new houses,” Sharon says. She continues: “I love it because I know there’s something good going to come at the end of it. I would like to think that when this happens, that we’ll get our community back again.”

While 40 per cent of the ‘inner’ Village area will be regenerated, most people want that to cover 100 per cent of that area. The 40 per cent will be taken as a start, Ann explains, but people will keep campaigning for a full regeneration once that gets under way: “Just the sooner it starts the better.”

The first new houses are due to be built in two-and-a-half or three years’ time.

People do rally round in hard times and the hope for a better future in the area is encouraging residents to stay and see it take shape. 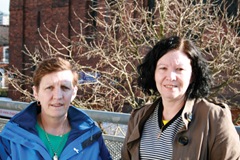 Sharon recalls: “I want to see my area coming back to what it was. When I was growing up everybody knew everybody and it was a community then.”

“You left your door open when you were going out,” Ann remarks. “Now you lock it behind you.”

The area lacks many of the services which others would take for granted.

Several churches serve the area but their congregations are dwindling. There are three small primary schools which are being amalgamated into one, with the regeneration trust’s backing, but no secondary school; pupils go by bus to Dunmurry. There is also no green space although the residents are currently designing a new park.

“I just don’t think that it suits 21st century living, where people do want to have family accommodation,” trust director Paula Bradshaw reflects.

However, the trust has seen the area turn round, partly through its own small projects. These have included a children’s play park and multi-sports pitch, BMX track and new street lighting. Graffiti has been removed and some paramilitary murals taken down. It also offers training in wood work and advertises jobs for local people. 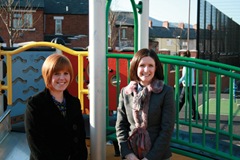 The area sits on the edge of the South Belfast constituency and for a long time, its people have felt on the fringes. Residents took their case to Stormont with a protest in January 2008, pointing out that some houses have outside toilets and no bathrooms.

“We are very good at putting pressure on people,” Sharon jokes. Paula puts the lack of political interest down to the fact that few residents are on the electoral register. The Village has loyal support from councillors Bob Stoker and Ruth Patterson but Paula thinks that “in terms of higher level politics, it is forgotten.”

People moved out during the Troubles and advanced purchases of houses have contributed to the dereliction. When someone moves out of a property, a developer would buy it up and then block up its windows and doors to stop vandalism; 123 houses are currently blocked up.

Housing remains the big issue. The trust has secured 10 new houses at Richview Court, just off the Donegall Road, and a further 42 dwellings are to be completed on Roden Street this month.

It has also been working with private sector developers and housing associations to establish housing on brownfield sites. Schemes have been earmarked on Maldon Street, Lemberg Street, the Donegall Road, Thalia Street, Roden Street and Milner Street.

“It’s going to be difficult in some ways to attract people back. Some people are very keen on it but a lot of people are more settled,” Paula adds. “I think people will come and especially if we ensure that there’s an adequate number of social housing; that will be a big draw to people coming in.”

Ninety-two per cent of houses in the Greater Village are two-bedroom and the population went down by 34 per cent between 1981 and 2001. The two figures are connected as people moved out because there was a lack of family-sized houses.

The £100 million regeneration plan will affect around 15 per cent of all houses in the Greater Village area i.e. 40 per cent in the central part.

A total of 538 terraced houses will be demolished – of which many are unfit for living – and replaced with 273 family-sized houses.