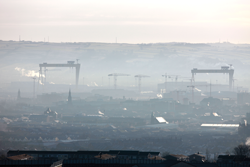 MLAs and business leaders are seeking bolder action after unemployment rose by 8,000 in three months.

Rising joblessness has prompted calls for an urgent re-think of the Executive’s economic policies.  The official measure of unemployment in Northern Ireland rose by 0.9 percentage points to reach 7.6 per cent in April-June 2012.  This represents 66,000 people out of work, a rise of 8,000 over the last quarter.

In the opposite direction, overall UK unemployment went down by 0.2 per cent to 8.0 per cent.  Labour, though, has pointed out that 90 per cent of the fall took place in London: a by-product of the Olympics.

Economic inactivity, a larger but less reported factor in the labour market, remained the highest in the UK at 27.3 per cent, down 0.2 per cent over the quarter.  This category covers people in a range of circumstances who fall within the working age population (16-64 years) but are not looking for work.  Most are studying, ill or disabled, looking after family at home or retired.

An estimated 10 per cent (57,000 people) did want to work but were either not actively seeking work or were not available to start a job.  They therefore fall outside the standard definition of unemployment, but would be considered unemployed by the general population.  This cohort is important as it includes people who had been looking for work but have since given up on finding a job.