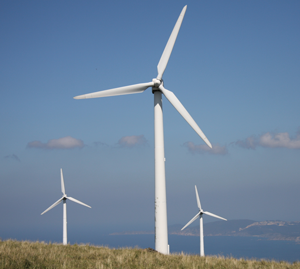 Planning reform could help to increase electricity generated from renewables to 40 per cent by 2020. agendaNi reports.

From October 2010 to October 2011, renewable electricity generation averaged at 10.6 per cent (882,276 MWh) of total electricity generated in Northern Ireland (8,331,515 MWh), despite Northern Ireland having considerable wind potential. The consensus in the energy sector is that the planning system is burdensome, bureaucratic and too readily takes the side of local opposition.

PPS18 encourages the integration of wind, solar, hydro, geothermal and biomass energy technologies and the application of passive solar design (i.e. for heating and cooling) in the siting and layout of the development.

For wind turbines, PPS18 points to supplementary planning guidance which notes that large scale landscapes where the turbines do not impact on the horizon, tourism sites, surrounding buildings or landmarks (perhaps brownfield or industrial sites that are already affected by masts, pylons or chimneys) are the most likely to get planning. Applications for areas with a “scenic quality”, cultural importance or that have a “wild or tranquil character” are less likely to be passed.

Wind farm developers also have to consider the impact of existing turbines and those with undetermined applications. They must assess the risk of causing a landslide or bog-burst and ensure that it won’t impact on telecommunications systems such as air traffic control or emergency services communications. Safety problems arising from noise, ice throw or reflected light must be considered, and plans must be in place to dispose of the technology and restore the site if necessary.

Damage caused by construction of the renewable technology must be mitigated by compensation such as a habitat management plan or creation of a new habitat.

The statement sums up: “Development[s] will be permitted provided the proposal, and any associated buildings and infrastructure, will not result in an unacceptable adverse impact on public safety, human health, or residential amenity; visual amenity and landscape character; biodiversity, nature conservation or built heritage interests; local natural resources; and public access to the countryside.”

Queen’s academics Geraint Ellis and John Barry, in a 2010 paper entitled: ‘Beyond consensus? Antagonism, republicanism and a low carbon future’, argue that the search for consensus between opponents and developers should be replaced with “open and honest” debate.

In order to meet the 2020 targets in the next decade, local opponents should be engaged in “meaningful engagement” e.g. through public enquiries, citizens’ juries and planning appeals. The possibility of locally enforceable energy targets should be considered, the pair suggest.

Ellis’ research found that although visual impact is the most common cause for opposition, it is given a low priority in the planning process. Opposition peaks when a development is proposed but declines when it is built. The regulators and developers can portray opponents as ‘deviant’, thereby heightening their antagonism.

Ellis and Barry concluded that proper engagement with local residents would be “a radical departure from the current planning process” and would increase the likelihood of gaining support.