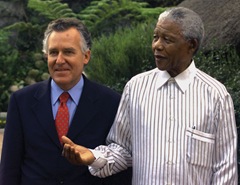 Executive ministers are too timid and difficult decisions must be tackled, Peter Hain suggests. The former Secretary of State talks to Peter Cheney about his current views on and hopes for Northern Ireland and South Africa.

Devolved ministers have been reluctant to make hard choices, Peter Hain claims as he reflects on Stormont’s record over the last three years. That said, Hain still considers his prediction that devolution is permanent as correct.

Promoting his biography of Nelson Mandela, the reason for his Belfast visit, Hain is optimistic for both his former home country and the region where he had a short but active tenure as Northern Ireland Secretary.

He remains convinced that he was the last direct rule Secretary of State. Devolution has “bedded down pretty well”. Tensions and arguments were inevitable. The idea of politicians’ private lives becoming a big issue, though, was “quite unexpected.”

“The one thing about politics is it’s completely unpredictable,” he comments. “The only thing I would say is that I don’t think that the ministers in the Executive have actually been strong enough in taking difficult decisions.”

It was put to him that devolution has not lived up to its initial hype. Little progress has been made on a single education authority, local government reform and developing a shared future. This he accepts, adding his own example of a now abandoned fund for referrals to complementary therapies on the NHS.

“The officials and the medical establishment never really liked it and I think a lot of the ministers have been too timid,” he states. “They’re still run too much by their officials, probably.”

On the other hand, a government led by Sinn Féin and the DUP is “completely new”. Hain would later tell a Belfast Festival audience that while the NIO and Downing Street were pessimistic after the 2005 election, he dissented.

“I actually felt more encouraged about the prospects for getting a settlement because when you have the two most polarised sections of a society, if you can bring them together then it would stick.”

Growing up in South Africa, Hain followed his parents into the campaign against apartheid. His mother took Mandela lunch parcels when he was on trial in the 1950s and was usually the only white person in the public gallery during his 1962 trial.

“I got drawn into it because they were increasingly active and met very severe repression from the security forces,” he recalls. “One of my earliest memories is waking up in the early hours of the morning to have my bedroom searched by [the] Security Police. Another was being woken up again a few years later and told that my parents had been jailed without trial or charge.”

The family left for Britain in 1966. At that point, Mandela had already spent two years on Robben Island and Hain’s first meeting with his hero only took place in 1991.

Mandela was visiting Parliament and, he recalls, delighted to meet Hain due to his campaigning against all-white teams in the 1970s. “We pioneered tactics,” he explains. “It was my idea of running on to the pitch, sitting down and stopping the match physically.”

Despite a news blackout, prisoners had learnt about the protests from their white warders’ frustrations that the Springboks had been stopped. “They were enormously encouraged by that because it was a very dark time there.”

Nearly 20 years on, he still considers the new South Africa a “joyous” place to visit.

“You saw that in the World Cup, a bubbling rainbow nation. It’s got problems like everywhere’s got problems but they’re problems of a more normal society: crime, corruption, political infighting.”

Apartheid, though, still leaves a legacy in high unemployment (29.5 per cent officially) and “tremendous poverty” among the black population. “At least they are free,” he continues, contrasting today’s challenges with having no vote, nor decent homes, schools and job opportunities.

His book, Mandela: The Story of a Universal Hero, is introduced by Desmond Tutu and retells Mandela’s personal story from a rural childhood to respected statesman.

Among all the world leaders he has met, Hain has never met anyone with such an interest in individual people. The book reveals Mandela’s private criticisms of the Iraq War, the Zimbabwe crisis and his successor, Thabo Mbeki. 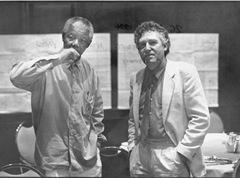 Devolution may be durable but Northern Ireland’s stability is again at risk. Hain, though, remains hopeful. The province’s future, in his view, involves increased cross-border co-operation on economic and social issues.

“Yes, the Real IRA and the Continuity IRA pose a threat but I just feel they are part of the kind of rigor mortis of that kind of paramilitarism whose time has passed. There’s no clear objective any more … I don’t think they can drag Northern Ireland back.”

Mandela: The Story of a Universal Hero is published by Spruce.

MI5 confirmed in September that dissident republicans were using Semtex in attacks. When it was suggested to Hain that the Provisional IRA had not fully disarmed in 2005, he said that did not deny the credibility of that historic event. “Nobody ever said that somebody ‘freelancing’ didn’t have something hidden away unbeknown to the leadership, but I think there was verifiable decommissioning.”

Separate education has a “horrendously high” cost, according to Hain. While he would not be drawn on Peter Robinson’s apartheid comparison, he noted if two small Catholic and Protestant schools were not viable and could be merged, “considerable savings” would result. That could then be reinvested to improve standards in schools. Shared education “must be the way forward.”