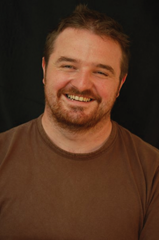 Emerging writer David Ireland has been appointed playwright-in- residence at the new Lyric Theatre which re-opens in May. He tells Emma Blee about breaking into theatre and his ambitions for the year ahead.

When a fresh-faced David Ireland wrote to Kenneth Branagh around 15 years ago to ask for funding to go to drama school, it didn’t cross his mind that one day he would work alongside the actor.

“I’m going to have to thank him for his cheque when I see him. I just hope he doesn’t want it back,” he jokes.

Now in his thirties, the news that he had been appointed playwright-in-residence came as a “real shock” and he “had trouble sleeping and eating for a few days”. Ireland is due to take up the post when the theatre re-opens in May and is eager to write an “interesting and fresh” new play, as well as organising workshops and finding new and upcoming talent over the course of the year.

It is an “exciting time”, says Ireland, with performances by Branagh and Rob Brydon scheduled for the opening week. However, he isn’t feeling too much pressure so far: “Sometimes you sit down and it all comes out, and other times writing a play is extremely difficult and requires a lot of work. It’s best not to think about it too much and just let it happen.”

He adds: “When you’re an emerging writer, you struggle to find time and energy and sometimes you’re working a job to pay for it, but this gives me a weekly wage so I can devote my time to writing.”

Ireland took an interest in drama at school and played his first role in the musical ‘Brave New World’ with the Ulster Youth Theatre at the Lyric. He went on to train as an actor at the Royal Scottish Academy of Music and Drama and has worked for theatre companies across the UK including the Royal Shakespeare Company, the Royal Exchange Theatre in Manchester, the Citizens’ Theatre in Glasgow, and the Traverse Theatre in Edinburgh.

He has also worked locally with theatre companies such as Ransom and Tinderbox on his plays ‘Arguments For Terrorism’ and ‘Everything Between Us’. As well as being an associate member of Dundee Rep Ensemble, Ireland is currently under commission to Oran Mor in Glasgow and Tinderbox.

Experience in acting has helped his writing, he says, and he doesn’t think he could do anything other than the two. After trying his hand at several temping jobs he realised he was “terrible at them”.

Ireland had been living and working in Glasgow for around 10 years after drama school but returned to Northern Ireland when he started writing more seriously.

“I felt like I was writing a lot about Northern Ireland and I was writing Belfast voices but I felt disconnected from Belfast and I felt a need to reconnect with the place and find out what was going on here.

“Ironically, I got the Lyric job just after moving back to Glasgow recently. When I was living in Belfast, I met a girl from Glasgow so I’ve moved back there for love.”

Living between the two cities will have its own “strains and struggles” says Ireland but he “loves Glasgow and loves Belfast so it’s a privilege to have a career in both cities”.

Much of Ireland’s work is based on Northern Ireland politics and the peace process, for which he has been criticised in the past. “I think the trouble is if you write something that could be seen as vaguely touching upon the subject of sectarianism or the Troubles, it’s sensitive but also people think it is clichéd and they’ve heard it all before. But I do think there’s a way you can write about it that makes it fresh and interesting and gives it a new perspective,” says the playwright.

He finds Northern Ireland “unique as a country” and says that as a writer he tries to reflect the society he lives in. “There’s a lot more interesting things you can say about here than you could about other countries,” he remarks.

Despite the local angle, Ireland says his work has also gone down well internationally: “‘Everything Between Us’ was originally produced in Washington and initially we thought that they might not get it, but they really loved it there and they really got it.

“A part of the play makes reference to the Israelis and the Palestinians and comparing the conflict here to that and the Americans really loved that. A few members of the audience said that the show should really go to Israel, which would be interesting!”

The Lyric Theatre will re-open on 1 May. The new building includes a 389-seat main auditorium, a new studio with flexible performance area, dedicated youth and education space and improved front and back-of-house facilities for staff and artists.