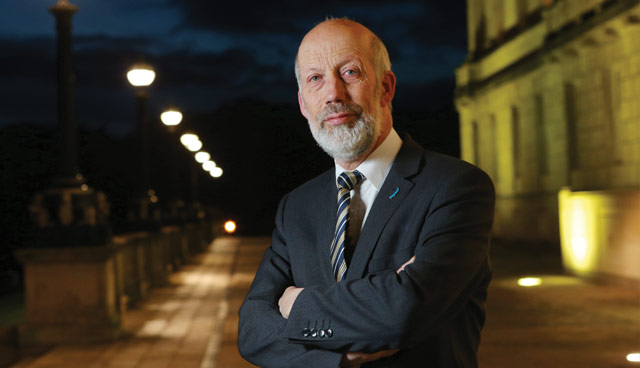 Two decades after being elected to Stormont, former Justice Minister David Ford has stepped down as an MLA.

The English-born politician and the Alliance Party’s longest serving leader stepped down from his role on 30 June, exactly 20 years after he was elected as an MLA for South Antrim.

Successful in six consecutive elections, the ‘father of the house’ described his “enormous privilege” to represent the people of South Antrim and the wider Alliance Party, adding his desire to see the “next generation” continue the trend of growth.

Ford joined the Alliance Party shortly after it was founded whilst studying economics at Queen’s University Belfast. He briefly worked as a social worker before taking up the position as the party’s general secretary in 1990.

In 2001, he took over as leader of the Party following a poor election outcome for his predecessor Seán Neeson. Ford famously redesignated as a unionist, along with two colleagues for 22 minutes in that same year, allowing for Ulster Unionist leader David Trimble, who had lost his assembly majority, to get re-elected as First Minister.

Ford improved the party’s stock, increasing their vote share at all levels since taking up the helm and this was reflected in Naomi Long being elected as an MP for the traditional unionist strong-hold of East Belfast in 2010. However, despite incremental and steady successes at the polls, Alliance has thus far failed to sway the volumes of nationalist and unionist voters required to make serious change to the Assembly.

Under his leadership, the party also voted to support legislation to facilitate gay civil marriage, despite his Presbyterian beliefs. Initially, Ford stepped aside as an active elder in Second Donegore Presbyterian Church but, in 2016, he was removed from the role because other elders refused to work with him.

In terms of personal accolades, Ford will undoubtedly be remembered for becoming the first local minister in almost four decades to take charge of the justice portfolio.

His major contributions mostly came in the shape of reform, in areas such as youth justice, changes to legal aid and prison reform. In 2015, he refused to resign his post after an inspection on Maghaberry Prison by Nick Hardwick, Her Majesty’s Chief Inspector of Prisons in England and Wales, said it was the most dangerous jail he had ever inspected.

Ford also sought to reform the law around termination of pregnancy in cases of fatal foetal abnormalities. His attempt to bring legislation to the Executive was blocked and so he instead brought a Private Member’s Bill, however, this became a casualty of the Executive collapse. After a party decision not to take up the justice position in 2016, he resubmitted the Private Member’s Bill as an MLA.

In October 2016, Ford announced his decision to step down as party leader marking it 15 years since he took up the position. He continued to serve as a representative of South Antrim but recently stated: “I think given now I’m a couple of years past the retirement age, it’s the right time to leave to get someone else established while the Assembly is not functioning normally so they can be ready to go when the Assembly is restored.”