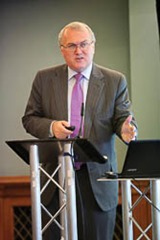 Infrastructure UK Chief Executive Geoffrey Spence outlined the UK Government’s approach at agendaNi’s seminar on infrastructure investment. Projects with a direct economic value are being prioritised and £377 billion of spending is planned over the next 10 years.

Originally from Bangor, Geoffrey Spence is Chief Executive of Infrastructure UK, a unit within the Treasury. He previously worked in investment banking for 24 years and was a special adviser to Alistair Darling as Chancellor of the Exchequer.

Infrastructure UK manages the roll-out of the National Infrastructure Plan and the Infrastructure Guarantee Scheme and also advises other Whitehall departments on procurement and overseas governments (e.g. in China and the USA) which are want to learn from the UK’s example.

“This government probably places less priority on developing [social infrastructure] assets,” he commented. “One of the reasons is that over the period of the last 20 years, we’ve actually invested a considerable amount in refurbishing our stock.” Around 700 major health and education projects have been completed. The Coalition Government is therefore focusing on economic infrastructure, namely:

In the South of England, house prices are increasingly linked to their broadband connection speeds. The capability to connect efficiently to broadband is becoming a key driver for businesses.

London is a “global hub” for economic activity but the UK’s other cities are small by comparison and their potential needs to be combined e.g. through high speed rail links. The Treasury wants to see an agglomeration in the North of England, taking in Liverpool, Manchester and possibly Leeds with the HS3 link.

The National Infrastructure Plan articulates the Government’s long-term vision up to 2020 and beyond. “The first reason we’ve done this is because industry’s asked for it,” he stated. “If you look forward 10 or 30 years, industry worries about what is going to happen. They need to know where to invest in terms of the skills that we need to deliver this.”

Fast growth in the overall UK economy means that the construction sector cannot currently catch up. Over the next five years, the sector estimates that it will need 1 million new employees with the right skills.

“We’re going to be tunnelling under London over the next 30 years,” he predicted, pointing to Crossrail, a large scale sewer building programme, and the tunnel works for HS2. Working with the private sector, the Government has established a ‘skills academy’ in Hackney to train up tunnelling engineers.

Overseas investors also appreciate consistency, commitment from government, and a long-term approach. Infrastructure UK also holds ministers and departments to account by setting out the scale of investment and measuring progress. 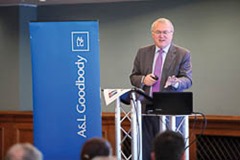 Energy is an overriding priority (see table below). “We’re very near to not keeping the lights on in the UK with quite a low reserve margin,” he warned. “So we need to make that investment for that alone and to take carbon out of our generation capacity.” Much of this work is already under way i.e. 145 projects operational and 146 under construction. If a project falls behind schedule, ministers need to explain why this is the case and what action they are taking to put it back on track.

Forty priority projects (or groups of projects) are centrally monitored by a Cabinet sub-committee, chaired by the Chief Secretary, with Infrastructure UK acting as its secretariat.

“We grind down to minute detail,” Spence continued. “If we have a particular problem, say, with getting wind farm consents because of aviation concerns – in terms of radar interference – we spend a lot of time with the ministers concerned in that committee driving through what needs to be done to actually deal with that very specific problem. It’s national politicians operating at a very granular level to make sure this programme goes forward.”

The £377 million spend appears achievable when it is considered that the UK already spends £35 billion per year on infrastructure. In the ‘do nothing’ scenario, population growth will spread traffic congestion across the country. Investors’ perceptions of how congestion will affect their business provide compelling reasons for investing in economic infrastructure. The funding mix varies considerably between the sectors e.g. with tax revenues accounting for most infrastructure spending in transport and consumers paying for most energy infrastructure. The Treasury thinks that the latter (regulatory) model is working well. Regulators sometimes agree with political representatives about how to protect consumers but they arrive at those conclusions independently.

Spence expects the state to play a larger role in infrastructure going forward. Network Rail, for example, has recently been reclassified to the public sector. However, another class of assets such as nuclear power stations and wind farms will depend on project finance or a similar type of debt or equity capital.

“We don’t have an equity gap in the UK,” Spence emphasised. “We have far more money chasing equity opportunities than we have assets to give, and that’s a good thing.” Overseas investment in all assets is welcomed and new institutions, particularly pension funds, keep coming forward. The financial crisis, though, caused major losses as banks booked long-term debt at low prices. Banks have generally pulled back from lending for the long term and the Government has been seeking new sources of long-term lending from pension funds, insurance companies and the European Investment Bank.

The UK guarantee scheme exists to fill potential gaps in finance. Any private sector investor with a financially credible project can apply for assistance and, on most occasions, a guarantee for long-term debt is offered. Around 40 projects have reached the pre-qualification stage for a guarantee, mainly covering energy but also including housing and universities.