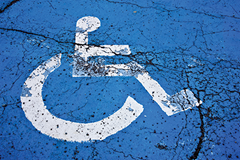 An overview of how disabilities are defined and the main legal protections for people living with them.

The Disability Discrimination Act, introduced by John Major’s Government in 1995, remains the main law on protecting the rights of people with disabilities in Northern Ireland. However, Parliament has been legislating on those rights since the wartime Disabled Persons (Employment) Act 1944, adopted in Northern Ireland in 1945. Society, of course, has a much longer track record and ethos of care and service.

In the 1995 Act, disability is formally defined as “a physical or mental impairment which has a substantial and long-term adverse effect on a person’s ability to carry out normal day-to-day activities”.

While everyone experiences illness, whether physical or mental, a disability only occurs when it affects how a person carries out their normal, everyday activities and has lasted at least

12 months. A person experiences a disability if they are unlikely to live longer than 12 months due to their condition.

The Act explains that a disability must affect one or more of the following factors in a person’s life: mobility; manual dexterity; physical co-ordination; continence; ability to move everyday objects; speech, hearing or eyesight; memory or ability to concentrate, learn or understand; or their perception of risk of physical danger.

Disability also covers recurring or fluctuating conditions (where a person’s routine is likely to be interrupted), degenerative conditions (from when they first affect someone’s everyday life) and severe disfigurement e.g. a facial injury.

The Disability Discrimination (Northern Ireland) Order 2006 also protects people with cancer, HIV or multiple sclerosis from the point of diagnosis and removes the requirement that a mental health condition must be clinically well-recognised.

In international law, the 1948 Universal Declaration of Human Rights affirmed that all human beings are “born free and equal in dignity and rights.” More specific rights are set out in the UN Convention on the Rights of Persons with Disabilities adopted in December 2006. The treaty was signed by the UK on 30 March 2007 and ratified on 8 June 2009.

Implementation is co-ordinated by the Office for Disability Issues in the Department for Work and Pensions. The Office of the First Minister and Deputy First Minister is responsible for implementing the convention in Northern Ireland, and is legally held to account by the Equality Commission and Human Rights Commission.

Two rights contained in the convention are particularly important to campaigners: legal capacity on an equal basis with others (Article 12) and an adequate standard of living (Article 28).

On the first point, the Department of Health, Social Services and Public Safety plans to bring forward a Mental Capacity (Health, Welfare and Finance) Bill in the autumn, which will allow more disabled people to make decisions about their lives.

In addition, campaigners have been highly critical of the Coalition Government’s changes to spending and welfare and have urged the Executive not to follow its example. Stormont has limited influence over its budget and welfare reform (due to the block grant and parity) but ministers have been asked to ensure that the needs of people living with disabilities are met as far as possible.