Northern Ireland’s inability to draw down almost one quarter of the £1 billion confidence and supply funding commitment secured from the Treasury in 2017 has raised questions as to whether unallocated funding will now be available for broadband, severe deprivation and mental health.

Monies thought to have been ringfenced for dealing with some of Northern Ireland’s most pressurised services back in 2017 appear to have been subsumed by the latest financial package to support the restoration of power-sharing at Stormont. Longer term (funding allocated over five years) projects identified in the confidence and supply agreement such as broadband, severe deprivation and mental health will now most likely rely on the prerogative of the Executive if they are to see the planned investment realised.

Finance Minister Conor Murphy disputed with Whitehall the level of funding he deemed necessary to implement the various ambitions of the New Decade, New Approach deal prior to the UK Budget announcement in early March.

As a result, ambiguity has arisen between the Department of Finance and the Executive’s other related departments over the monies’ availability in the context of the new funding package.

Murphy, whose Sinn Féin party, along with the Northern Ireland Assembly’s other main parties, signed up to the restoration of the institutions with limited details around the scale of the financial contributions planned by the British Government, was instantly critical of the £2 billion package offered to the Executive, believing that it fell far short of what was needed.

In a ‘factsheet’ published by the Department of Finance in the wake of the British Government’s package announcement, the Department indicated its belief that only £760 million of the £2 billion package was deemed ‘new funding’. The Department estimated that £1 billion can be accounted for from future Barnett consequential, regardless of New Decade, New Approach, and £240 million was provided from undrawn confidence and supply funding.

The response showed that while £763 million had been drawn down to cover the areas given in a two-year allocation in the agreement, the shortfall appeared in areas that had been identified as five-year investments (£150 million broadband/£60 million severe deprivation/ £30 million mental health).

Project Stratum, the Executive’s aim to improve broadband connectivity by extending infrastructure to almost 80,000 premises across Northern Ireland has the smallest allocation (£3 million) to date in comparison to the £150 million commitment made under the confidence and supply agreement.

However, even the £3 million, which the Department for the Economy says was a capital allocation for 2019/20, has now been re-profiled across the financial years to 2023/24. The Department explained that no capital expenditure has been incurred to date and no capital costs will be incurred on the project until after the contract award, expected in mid-2020. 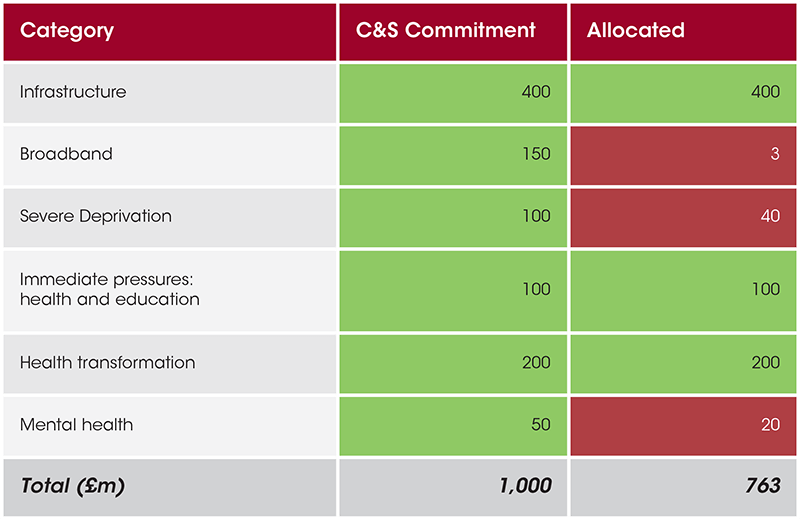 Asked whether the full funding would be available, a Department spokesperson said: “The full £150 million has been profiled across the financial years to 2023/24. The availability of the funding is unaffected by the New Decade, New Approach agreement.”

However, the statement by the Department for the Economy appears at odds with the Department of Finance’s factsheet, which in describing the money as “undrawn” highlights its inclusion within the wider £2 billion package.

When asked for clarity, a Department of Finance spokesperson said: “Discussions are ongoing on the financial package including the restoration of the remaining confidence and supply funding. Broadband remains a key priority for the Executive.”

When the contrast was highlighted to the Department for the Economy, the Department’s response appeared to suggest a shift in its understanding. “We fully expect the Executive to provide the funding for this project and we are working on that basis,” the latest statement read.

It appears that the unallocated funds will now be issued to the Executive as part of the New Decade, New approach financial package, with the Executive then faced with the decision as to whether to reaffirm the financial commitment. Such a decision will have to be balanced against other pressing priorities when the Northern Ireland budget plan is revealed at the end of March.