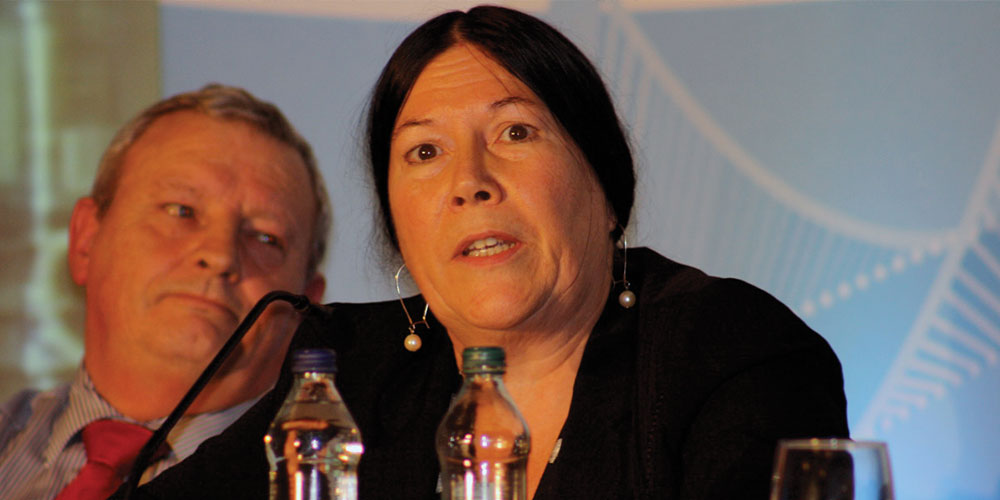 Bronagh Hinds describes her interest in politics as being oane with a small ‘p’. Rather than partisan politics, her agenda has always been to ensure that politics in Northern Ireland is inclusive and diverse. “Politics is for everyone and we must ensure that our governance is fit for everyone,” she says.

She served as the party’s chief strategist for a period, during which the party was involved in the talks which would eventually lead to the Good Friday Agreement and the election of two party members in the 1998 Northern Assembly Election.

It is widely believed that the presence of the party forced others to include women’s interests in their campaigns and field more female candidates as a response to their growing popularity.

It was from this launchpad that Hinds saw scope for wider opportunities to empower women. This. she explains, came in two strands. The first was a partnership with organisations in the US, which would see up to 80 women from within civil society travel to the States for mentoring. The programme was aimed at enabling women with the necessary confidence and skills to move up the ranks within their various organisations. Although such mentoring programmes are now popular among the public and private sectors, the DemosraShe scheme was before its time.

The second was Northern Ireland-based and focussed on working with women who wanted to engage in politics. As well as engaging with the leaderships of the various parties and getting their buy-in to develop a strategy to develop the role of women in politics, the scheme also facilitated training and capacity building. Hinds explains that these included an extensive range of skills such as election confidence, campaign skills, media work, team building and public speaking.

She adds: “Female political role models now exist but at that time female representation was dire. One of the reason’s the Women’s Coalition stood was because we noticed that there was going to be very few female voices around the table that was negotiating the future landscape for Northern Ireland. I think there was a recognition that more female voices could bring new perspectives and a positive dynamic. It was a momentum for change.”

That momentum was carried on somewhat by DemocraShe, which when launched in Parliament Buildings, was one of the first things done by the Northern Ireland Assembly on a cross-party basis.

Asked whether the Northern Ireland political scene was explicitly sexist or if ignorance was the norm when regarding the representation of women, Hinds says: “It was not just politics, Northern Ireland was a conservative society and ingrained sexism was the culture. To some degree that still exists today, take the BBC pay gap figures for example.

“Looking back, there were scenarios when the Women’s Coalition were moo’d at, where those carrying the banner for gender equality were lambasted from within their own party and where parties put female representatives up to argue against their fellow females as a tactic.

“The problem wasn’t just simply sexism, it was around power. Greater female representation meant that power would have to be shared out and that meant people having to relinquish power.”

While there is work still to be done, Hinds believes that change has been achieved. She believes DemocraShe has played a part in that, highlighting that at one stage in the early stage of the Assembly 50 per cent of females elected had been received DemocraShe training.

“Some parties have been quicker to take steps to combat gender inequality than others, however, I believe progress has been made across the board and there are some inspirational champions from all corners of the Assembly.”

Hinds points to the 2016 launch of Women in Public Life Programme by then speaker Mitchel McLaughlin as evidence that a greater focus is being put on the issue.

Of course, DemocraShe’s work is not limited to Assembly level and Hinds points out that the organisation has collaborated with local authorities to aid the career and skills development of both staff and politicians.

Asked whether this work has encountered much open hostility from men, Hinds explains: “One thing that has happened is that some men saw the development of females within their organisation and wanted similar opportunities. That’s a good thing. Our work is around enabling women to ensure that they have equal opportunities on merit, it’s not about simply balancing the figures for the sake of it.”

And are those women who have benefited from DemocraShe’s guidance doing enough to further highlight greater equality for women? Hinds says: “I recognise that there is some reservation around being pigeon-holed as solely focussed on women’s rights. However, there are some great champions and role models out there. I do hope these champions bring a holistic feminist agenda, with diverse and gendered perspectives.”

Concluding, Hinds believes that a greater level of thought needs to be given to the single biggest limitation facing female development: the childcare barrier. Outlining flaws in the system whereby the soaring costs of childcare are undermining attempts to encourage more women in employment, Hinds believes more effort needs to be put into to creating a tailored solution for Northern Ireland which would improve access to public childcare and enhance the role of public services.

“Access to childcare is a barrier. On one hand, we need to address the affordability and on the other we need to develop a mixed childcare model. In our society, it is most likely women who carry the responsibility for childcare and often commitments outside of working hours are made more difficult. We need a system whereby a councillor, for example, can access childcare to attend an evening meeting, without this being a conflict that weighs on her decision to engage in public life.

“Again, I do think some progress is being made. Globally, we see the Canadian President Justin Trudeau publicly bring his children to the office and moderate his work/family balance. The more role models there are, the greater potential there is to engage change within society.”

Alongside her role with DemocraShe, Bronagh has also had notable influence in Women in Local Councils, the Women’s Policy Group and the Women’s Budget Group. She was the Deputy Chief Commissioner of the Equality Commission for Northern Ireland between1999-2003. She was a Senior Practitioner Fellow at Queen’s University Institute of Governance for six years following 20 years in the voluntary sector as director of Gingerbread NI, regional director of Oxfam and director of the Ulster People’s College. She was the founder and chair of the Northern Ireland Women’s European Platform 1988-1998 and served as a Commissioner on the Northern Ireland Local Government Staff Commission 2005-2010 and the final Northern Ireland Commissioner on the UK Women’s National Commission 2007-2010.Internationally, she is heavily involved with the advisory board to the UN Special Envoy to Syria, advocating a greater role for women in conflict resolution negotiations.