Substance misuse is a contributing factor in the use of an average of 200 hospital beds per day in Northern Ireland, but despite its significant cost to the public purse, finances allocated to tackle the problem are minimal.

Despite the “high and rising” levels of harm caused by substance misuse, the Department of Health allocates a “small” annual budget to tackle issues, the Northern Ireland Audit Office (NIAO) has found.

The report estimates that annual cost of alcohol misuse is in the region of £900 million, a significant increase of over £200 million from 2009 levels. An estimated £250 million of these costs are borne directly by the health and social care sector. However, despite significant costs, the Department of Health allocates just £8 million per year for the implementation of the New Strategic Direction for Alcohol and Drugs. An additional £8 million per year is allocated for statutory addiction services from within the mental health budget. The allocation to addiction services represents 5 per cent of the total mental health budget.

Alcohol misuse deaths in Northern Ireland have risen higher than anywhere else in the UK, up 40 per cent since 2013. At the same time, the numbers seeking treatment for drug misuse have almost doubled from 2,107 in 2007 to 4,100 in 2019. While alcohol remains Northern Ireland’s deadliest substance in terms of misuse, strikingly, the NIAO estimates that drug misuse deaths have increased by more than 200 per cent over this period.

As well as a “significant escalation” in demand for drug misuse treatment, particularly relating to heroin use, addiction services have also reported changing patterns of drug use, highlighting the misuse of prescription drugs and polydrugs being significant factors.

Despite this, the Department of Health’s strategy for reducing harm relating to drug and alcohol misuse remains outdated. The New Strategic Direction for Alcohol and Drugs (NSD) was originally updated and extended from an end date of 2011 to 2016. The Department reviewed the strategy in 2018 and published findings in 2019 but no new substance misuse strategy has been published to date.

In the year previous (2017-18), the total cost of hospital admissions where alcohol and drug related conditions were recorded was almost £23 million. Recent reports suggest that one in 10 people in a hospital bed are alcohol dependent and one in five are drinking at a harmful level. Over 73,000 hospital bed days were occupied where substance misuse was recorded as a contributing factor in 2017-18, equating to 200 hospital beds occupied every day.

The NIAO reports that the number of deaths linked to prescription drug misuse is rising and is now involved in the majority of drug related deaths in Northern Ireland. Diazepam and Tramadol are the two most common drugs to feature on death certificates, however, there has been a “rapid” increase in the number of Pregabalin related deaths in the last five years.

As a result of increased demand, the NIAO outlines that addiction services are facing significant and growing pressures, “including the increasing complexity of care required, an ageing cohort of service users and co-existing mental health issues which make management of treatment more complicated”.

This is having a knock-on effect in relation to waiting lists. In July 2019, over 1,100 people were waiting for a first appointment with Tier 3 addiction services and Northern Ireland waiting time targets for substance misuse services are longer than the targets across the rest of the UK.

The NIAO report recognises that long waiting times can serve as a deterrent for people seeking treatment, contributing to increased dropout rates and negatively influencing health outcomes. In particular, it points to long waiting lists for the Substitute Prescribing Service. The Department has long sought to share responsibility of this care with primary care to reduce the pressure on statutory addiction services but has not yet been successful.

In addition, it states that referral pathways from statutory addiction services to rehabilitation providers are inconsistent and recommends these are reviewed. 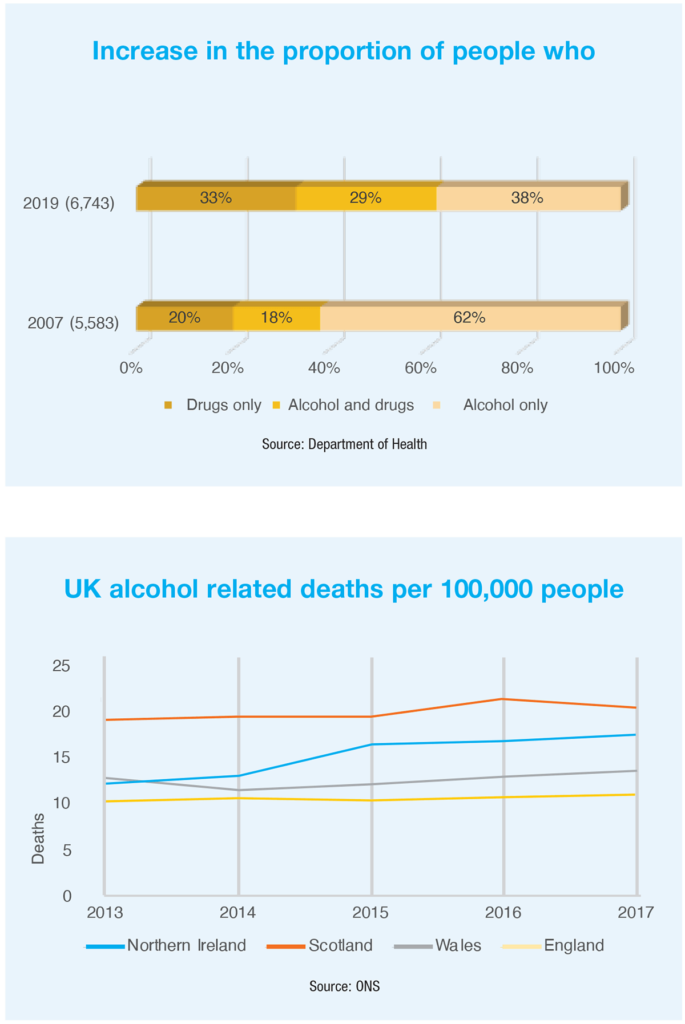 Despite the scale of the problem, the NIAO describes the performance of the Department’s monitoring as “limited” and states that as a result, it cannot be sure it is getting value for money or delivering effective service.

“The Department’s performance monitoring of substance misuse services is very limited. Data collected is not reliable or complete, therefore the Department cannot demonstrate that services are effective or delivering value for money for the taxpayer. The Department’s Substance Misuse Database has not been published for over two years due to quality issues,” the report states.

“The Department has little information on outcomes for service users. The data collected is largely activity based, rather than focusing on outcomes. Whilst we acknowledge that this information can be difficult to collect, ultimately the Department’s data should focus on the impact services have on people’s lives rather than the numbers coming through the door.”

“While the information that is available paints a worrying picture of a growing problem, it is disappointing that the Department has little reliable information on outcomes for people seeking treatment for addictions,” says Kieran Donnelly.

“As a result, it has not been possible to determine whether spending on addiction services provides value for money or whether service users are getting the best possible outcomes.

“The future focus must be on the impact services are having on people’s lives, not just the number of people looking for help. That’s why my report recommends that clearly defined objectives and outcomes are built into the Department of Health’s new alcohol and drugs strategy.”