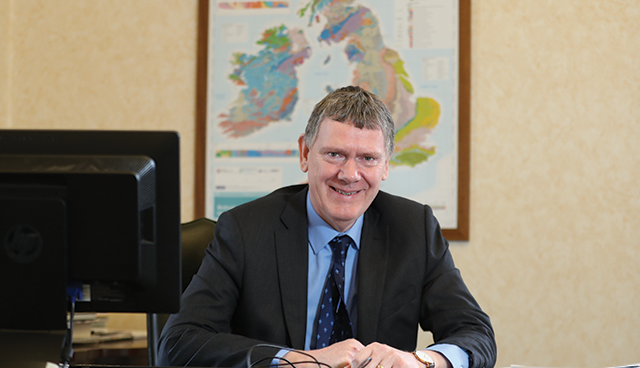 Andrew McCormick, Permanent Secretary at the Department for the Economy talks to Owen McQuade about the complexities of Brexit and the Department’s work in supporting the UK negotiations.

Andrew McCormick has a lot on his plate. His department covers all facets of the local economy from higher education to energy policy. Issues on his agenda when we meet are the Renewable Heat Incentive (RHI), a topic closed for discussion due to the ongoing inquiry, the trade dispute involving local employer Bombardier and not least, Brexit.

The Department for the Economy has had a fairly intensive degree of engagement with Whitehall officials on the various aspects of Brexit. McCormick highlights that having the issue of the Irish border in the first phase of the negotiations was significant. He echoes the line of Irish Foreign Affairs Minister Simon Coveney during a recent visit to Belfast, that now is the time for everyone to speak up and be heard before the process moves on and the border issue receives less attention.

“It is important to understand and address the complex issues around the border,” McCormick emphasises. “Although we have been doing all we can to support that process, it would be much better if there was an Executive in place. As officials, we can present facts and analysis but we can’t present policy positions. That is beyond our role.”

McCormick says that officials from his department have had “good and positive” engagement with both Whitehall and Brussels. The Department for the Economy is responsible for most devolved matters aligned to the Department for Business, Energy and Industrial Strategy (BEIS), but also for digital, tourism and telecoms policy aligned to the Department of Digital, Culture, Media and Sport. As well as a significant part of Department for Education, for higher and further education policy, it is also liaising, in conjunction with DAERA, on trade issues with DEFRA. “There has been lots of contact on a highly complex set of interventions,” McCormick states.

Turning to the Brexit negotiations process, McCormick highlights what is a hugely complex situation with no defined set of choices. DfE is anticipating the implications for various aspects of potential change. The Department has been using scenario planning techniques to determine possible outcomes and their implications for the Northern Ireland economy. “Looking at the UK position papers, DfE is analysing a whole set of trade issues and how there can be different ways of preserving the frictionless border. That is our main priority at present and reflects the concerns of all sorts of businesses, particularly the agri-food and SME sectors.

“We have also been working on migration and travel issues. The Common Travel Area discussions seem to have progressed well. But there are still complex and important issues to be resolved around migration.”

In addition to agri-food, McCormick highlights energy as “an important and complex area”. Although a very technical area, it was one of the top five issues identified in the Executive Office’s August 2016 letter to Theresa May. Close reading of the UK position paper on the Irish energy issue is important. It contains the phrase “without prejudice”. The paper called for a solution to energy in an island context and that any solution would not form the basis of any EU-UK future relationship on energy. “The starting point in energy is the SEM (single electricity market) which is founded on EU regulatory regime and both sides want to make that work.”

Although DfE is the managing authority for some European funding, the issues around these funds are being led by the Department of Finance. There is also a complex agenda around legislation and state aid which includes the repatriation of powers from Europe, “where there is not unanimity of views between London, Edinburgh and Cardiff”.

“What happens to powers that come back from Brussels and the considerations around that will be what is going to help make the economy work. Colleagues in Whitehall are thinking about how the UK economy will work post-Brexit and what are the regulatory regimes that will apply to make things work. There is a tension between more devolution of power and the benefits of things remaining coherent across the UK: if the latter helps secure trade deals with the EU or with the wider world – then that could in turn help the Northern Ireland economy.”

“Unless we can negotiate some unique arrangement for the two parts of Ireland or something much wider for the UK, we have problems to face up to.”

Interaction between the Department and the Northern Ireland business community has increased considerably over the past couple of months. There are now formal engagements with all the business organisations once a month, and also with the universities. There are also formal meetings with local councils through NILGA: “There is also a lot of informal engagement and we are keen to keep all stakeholders briefed on the key issues.”

Despite not detailing any major problems as such, McCormick gives the impression that overall the issues raised by Brexit may present challenges for the Northern Ireland economy. He counters this with a pragmatic: “businesses will adjust. They will look for the opportunity. That is what they do through necessity.

“In the current context, this will turn out as best as is possible by people working out where their best interest lies and planning, investing and recruiting accordingly. We could spend our time worrying about change, but businesses aren’t doing that. There are a lot of challenges but there is a willingness to get on with things.” When asked if the ultimate extension of such a coping would be to move across the border? He replies: “That is a genuine concern. We are aware of the worries of businesses – access to skills, the impact of different regulatory regimes or the possible introduction of tariffs.”

Although there is a long list of challenges, McCormick is positive on the border issue: “In the negotiations, overall there is tremendous goodwill around the Irish issues from London, Brussels and more widely. Michel Barnier knows both Ireland and Northern Ireland well. He was here when he was European Commissioner for Regional Policy. There are a lot of positives and there is a willingness to find a way forward on the border issue.”

The outworking of Theresa May’s Florence speech is still not apparent but McCormick acknowledges the UK-wide business community’s wish for a transition period and the Prime Minister’s speech seemed to move towards that. DfE officials have been to Brussels and Dublin and been told that things can’t end up with an outcome that looks favourable to the UK. That could potentially undermine the EU: If anyone can leave and be better off, why would they want to stay?

“There is a tension between more devolution of power and the benefits of things remaining coherent across the UK: if the latter helps secure trade deals with the EU or with the wider world – then that could in turn help the Northern Ireland economy.”

When asked was he frustrated by the quality of the debate in the media, he says there has been “limited insightful comment” but acknowledges the genuine complexity of the issues and that a lack of objectivity can often cloud discussions on Brexit.

Quizzed on whether there were any surprises as they started working on the detail of the implications of Brexit for the Northern Ireland economy, McCormick says there were no surprises but they were struck by the particular complexity of the agri-food sector. He sees no easy solution. “It is not just about tariffs and trade but more about regulatory equivalents and standards requirements.” 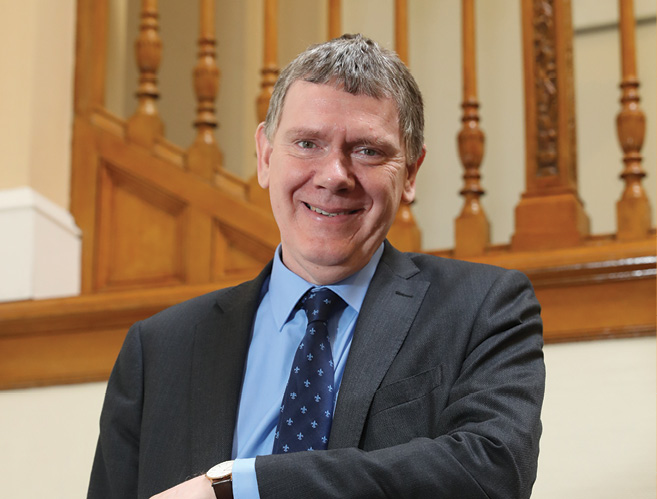 Returning to the border issue, he highlights the “vital words” in the European Council’s guidelines for the first phase of the negotiations. There are two clauses. The first is a mandate to look for “flexible and imaginative” solutions in relation to the border. The second clause says that any agreement should protect the integrity of the EU legal framework. “Those two clauses are obviously in tension with each other,” he states. The stance after the August negotiations was the EU putting the onus on the UK to come up with solutions but the Council mandate puts that onus on the EU as well. “We need solutions, particularly with agri-food products crossing the border several times during processing.

“The blunt fact is that exit from the European Union means exit from both the customs union and the single market. Unless we can negotiate some unique arrangement for the two parts of Ireland or something much wider for the UK, we have problems to face up to. There is still a long way to go on those issues. However, I think it is important to stay positive and make constructive suggestions around what is achievable. The CBI nationally, although candid and direct, has been constructive in its responses to Brexit.”

Looking to the future, McCormick says he and his department will be “staying as close as possible to the UK negotiators”.

“They are also content for us to have informal discussions in Brussels. We will be providing analysis and evidence not judgements or preferences. Finding pragmatic solutions that don’t undermine anyone’s sense of identity but yet facilitate economic activity will be crucial. It would be an ideal world if we had an agreed position at an Executive level but that isn’t the case. We will keep at it and continue to highlight the issues that impact on Northern Ireland,” he concludes.