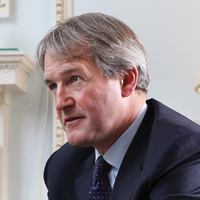 Owen Paterson made his mark by challenging Stormont on its performance and pointing out the risks of a state-dependent economy, Peter Cheney writes.  However, his corporation tax battle may prove unsuccessful and relations with local ministers were often strained.

“He wants to be here” was one NIO insider’s comment on Owen Paterson, just after an interview with agendaNi at Hillsborough in the summer of 2010.  The phrase is still a good analogy for his attitude as Secretary of State, although his strong views and robust defence of the Coalition Government regularly sparked opposition in the local political world.

After a steady first year in his shadow brief, Paterson’s profile rose rapidly when the Ulster Conservative and Unionist pact was announced in July 2008.  It never fully gained UUP support but Paterson, along with Reg Empey, was an energetic champion for the project over the next two years.

While the pact built up support by criticising the DUP over expenses and double-jobbing, the Conservatives also involved the DUP in talks on unionist unity at Hatfield House in January 2010.

A truce was declared in Fermanagh and South Tyrone under independent unionist candidate Rodney Connor but the rest of the campaign was dominated by fierce rivalry.

David Cameron’s comment that “there’ll be nothing swish” about his candidates (a reference to the Robinsons) angered the DUP and the party’s relations with Paterson have generally been cool.

His style in government matched the changing nature of his post.  Indeed, the Tories fully supported Labour’s devolution of policing and justice, partly to clear the desk of the incoming Secretary of State.

Most of Paterson’s political work focused on historical inquiries, occasional paramilitary prisoner cases and hearing the grievances of local party leaders, although the DUP and Sinn Féin looked back to high level negotiations in Downing Street and expected direct access to Cameron.

This freed him up to talk about his favourite narrative: rebalancing the economy, deficit reduction, corporation tax.  In many ways, Paterson was more ambitious than his Assembly counterparts, talking up the case for lower corporation tax more enthusiastically and a radical step change away from public sector jobs and spending.

Journalists appreciated his frankness.  “It’s very easy just to get sucked into the Stormont bubble,” he commented in 2008, “and I do think there is a dislocation between what the people I see on the ground are talking about and what people in Stormont or the media are talking about.”  In his view, “a whole strata of people” had “just been put off politics for the last 30 years.”

His soundbites in press releases and speeches became increasingly familiar.  “We cannot go on spending money we haven’t got,” he said in his 2010 agendaNi interview. “We are borrowing £300,000 a minute. If we go on like that, there’ll be a certain point when we can’t pay the interest on the national credit card and we’ve seen what happens in Greece.”

When most local parties complained about the 2012 Budget, he dismissed their views as populist and demanded that they provide alternatives: “They never, ever come back and say how those [tax] reductions will be paid for.”

In the long-running campaign to devolve corporation tax, Paterson may have been naïve in thinking that the Treasury would release the power, especially as the same pressure mounted from Scottish nationalists.

His bluntness also offended former friends in the UUP (the Tories wanted to wind the party up into a regional Conservative wing) and his refusal to open new inquiries into collusion offended nationalist victims.  However, he could also be considerate, endorsing the Bloody Sunday inquiry’s findings but also suggesting that historians could handle the legacy of the past more sensitively than lawyers.

Republicans were irritated by his unashamed unionism, although this is balanced by Enda Kenny’s equally open nationalism.  He did not see the current institutions as the “final word” and wanted to see a “politics of interest” developing along non-sectarian lines.  However, there was “absolutely no rush on this” as the current arrangements had to work.
Visiting Washington was a particular highlight in the job, giving him the chance to catch up with his friends in the Republican Party.

Paterson could also claim a mandate.  While the Ulster Conservative and Unionist project ultimately failed, he could point to the 102,361 votes polled for UCUNF candidates in 2010.  The UK Government and the Northern Ireland Executive are both elected administrations, although the absence of any local Conservative MPs means that the NIO lacks a local political link.

Specific successes included the Presbyterian Mutual Society package, devolution of air passenger duty, the retention of Bangor’s coastguard and £200 million in counter-terrorism funding for the PSNI.

Within government, Paterson is a prominent spokesman for the Tory right, alongside the quieter Iain Duncan Smith.  His opposition to gay marriage reflects the views of many Conservative Party members, who are increasingly disillusioned with Cameron’s leadership.

Paterson had become more isolated after Liam Fox’s resignation but Chris Grayling’s appointment as a hard-line Justice Secretary strengthened the right’s position in the Cabinet.  Cameron knows that he needs to keep traditional Conservatives like Paterson on board to maintain a stable party, in an increasingly turbulent economic and political setting.