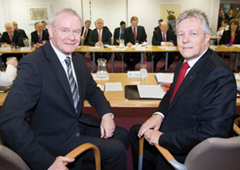 Twelve years on from the North/South Ministerial Council’s formation, the formal structures for cross-border co-operation are standing still although a new form of all-island politics appears to be gaining momentum.

Andy Pollak, the Director of the Centre for Cross Border Studies and a well-placed observer on North/South co-operation, has described the state of the Council as “minimalism (at best) or obstruction (at worst)” with meetings followed up by the “interminable internal processes for which the Northern civil service is famous”.

On the North/South Ministerial Council (NSMC), formal areas of co-operation and implementation bodies remain unchanged since it started in December 1999.  A review announced in the St Andrews Agreement (October 2006) has still not reported and the latest deadline is June 2012.

The North/South parliamentary forum has long been at the discussion stage, the all-island consultative forum has been halted by the effective abolition of the North’s Civic Forum (suspended since 2002) and the all-island charter of rights is practically impossible without a northern bill of rights.

The DUP is obviously unenthusiastic about North/South co-operation but Pollak is more surprised by Sinn Féin’s apparent lack of interest.  His sources indicated that the party’s ministers “allow their DUP colleagues to set the snail’s pace agenda”.  Writing on his blog, he suggested five reasons for its attitude:

1.    failing to understand the economic dimension (by not taking DETI);
2.    associating the North/South strand with the SDLP;
3.    intergovernmental co-operation being secondary to the goal of a united Ireland;
4.    the risk that North/South links legitimise two separate jurisdictions (and their border); and
5.    the potential for the Irish Government benefitting from North/South success.

Pollak added: “They have few or no new ideas for north-south cooperation and when they come to north-south meetings they do the business with their DUP and southern counterparts but little more.”

Responding, a Sinn Féin spokesman claimed it had “led the way on all-Ireland development and will continue to do so”.  The party has an internal all-island unit and the spokesman dismissed Andy Pollak as having “no such mandate” although as an academic, he does not require one.

None of these have been achieved to date as new policies depend on DUP endorsement at the Executive.  Some progress is possible in Gaeltacht development as Sinn Féin holds the culture, arts and leisure brief.

The party has lobbied on the A5 project, helped to draw up an all-island animal health strategy and established some all-island policy units in the Civil Service.

On the last point, Pollak concedes that may be “technically correct” but those units have a low profile and tend to be hard to contact.  The Department of Education, for example, has a high level ‘equality and all-Ireland directorate’ with a wide remit e.g. all external relations, human resources and communications.

Republicans appear to prefer ‘personifying’ unity in a way that no other competitor can.  As an all-island party, Sinn Féin holds 46 seats across both legislatures, has run a northern candidate for the presidency and has a northern-born ‘leader of the opposition’ in Gerry Adams.  Nationalist MPs attend the Oireachtas’ Good Friday Agreement Committee and Sinn Féin is demanding more northern speaking rights.

This indicates that that the party is more interested in concentrating its political influence in the centres of power, north and south, with Leinster House taking precedence over Stormont.

If the party were to enter government in Dublin, the NSMC would become a vital tactical tool.  With Sinn Féin ministers on both sides of the table, a new form of all-Ireland governance would take shape, bypassing the authority of the two ‘partitionist’ administrations and outmanoeuvring unionists.  The political consequences of that move are hard to predict but this could give the party the freedom to put its suggested strategies into action.

North/South links receive limited attention in the Irish Programme for Government, which anticipates a further review to identify new areas for formal co-operation.  More delay from the DUP can also be expected.

The NSMC was championed by the SDLP which, despite its enthusiasm for new structures a
nd strategies, is least able to act.  Its Assembly manifesto proposes an all-island energy regulator, environmental protection agency, corporation tax rate (at 12.5 per cent), sustainable transport strategy, aviation strategy and eating disorders unit.

As with Sinn Féin, it seeks northern representation in the Seanad, presidential voting rights and a northern voice on the Republic’s constitutional convention.  The SDLP also has a detailed blueprint for a united Ireland e.g. keeping the Assembly and Executive (with minority protections), the right to a British passport, and seats for unionists in the House of Lords.

The UUP’s emphasis is on being a ‘good neighbour’ with the Republic and Tom Elliott warmly paid tribute to Mary McAleese.  That said, the party is sceptical about the number of cross-border bodies and has called for the immediate publication of the St Andrews review.

Elsewhere, practical North/South co-operation has made strides in health (Altnagelvin Hospital’s radiotherapy unit will serve Donegal and Sligo patients), economic analysis from InterTradeIreland, the Single Electricity Market and a Northern Ireland advisory committee for NAMA.  The latter two areas developed outside the NSMC and prove that co-operation is not necessarily limited by its structural constraints.