The future of almost €100 million of Brexit-threatened EU funding drawn down by researchers and businesses in Northern Ireland for ground-breaking work in areas such as cancer research and climate change, has not yet been secured.

While much attention was given to the UK’s decision not to continue to participate in the EU’s Erasmus programme, estimated to deliver €2.1 million for Northern Ireland annually, less focus has been placed on access on the Horizon programme worth €95.7 million to Northern Ireland by October 2020.

Horizon 2020 was the biggest EU research and innovation programme ever and provided almost €80 billion of funding over seven years from 2014 to 2020. Almost 300 Northern Ireland participants have been successful, with an average grant award of €323,460 for each successful application.

The programme has been refreshed as Horizon Europe for the years 2021 to 2027 and the first work programmes are expected to be published by April 2021. In December 2020, political agreement was reached between the European Parliament and the European Council for the programme with a budget of almost €100 billion to 2027.

The programme has incorporated research and innovation ‘missions’ to increase the effectiveness of funding by pursuing clearly defined targets in the areas of: adaptation to climate change including societal transformation; cancer research; climate-neutral and smart cities; healthy oceans, seas, coastal and inland waters; and soil health and food. 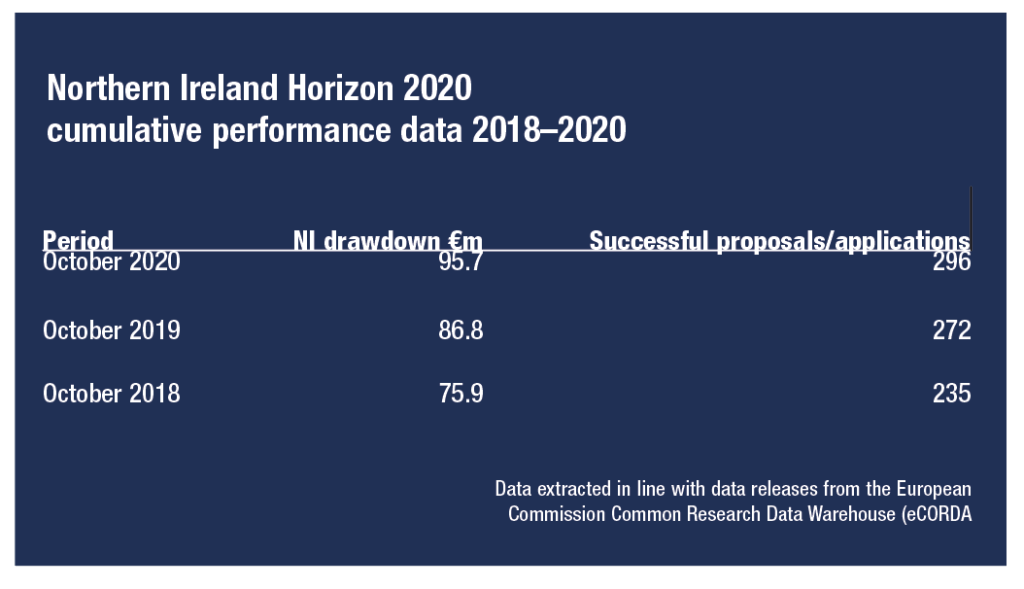 The prospect of a no deal Brexit raised concerns about the UK’s ability to participate in Horizon Europe, the bloc’s research programme. However, there were also concerns that even in the event of a deal, the UK might opt out of paying into the programme as a share of EU GDP contribution calculations could have resulted in the UK as a whole being a net contributor. Northern Ireland, however, is a benefiter.

The UK has agreed in principle to participate in the programme under the terms of the Trade and Cooperation Agreement with a “fair and appropriate financial contribution”. However, association is subject to ratification of the overall deal and finalisation of the Horizon Europe Programme regulations.

Northern Ireland’s Department for the Economy (DfE) confirmed that association is subject to ratification of the overall deal. In late February 2021, the UK Government agreed to the European Commission’s request for a “technical” two-month extension to the period allowed for the ratification of the agreement. The EU Parliament has the ability to veto the entire accord and the parliamentary vote cannot be viewed as a formality because of concerns around how the UK might move to tackle issues with trade into Northern Ireland.

Cumulative performance data for Northern Ireland in Horizon 2020 show that up until October 2020, 296 proposals/applications had been successful in Northern Ireland with a drawdown of €95.7 million.

The Department for the Economy says that it “strongly encourages” UK researchers and businesses to form collaborative partnerships with international counterparts and prepare to bid into Horizon Europe. It also outlined its assumption that association “will give UK scientists, researchers and businesses access to funding under the programme on equivalent terms as organisations in EU countries”.

“Additional detail on Horizon Europe will be included in a protocol to the main agreement once the regulations establishing the programmes are settled. DfE and the other devolved administrations will continue to liaise closely with BEIS over the coming weeks whilst the UK association status is ratified and formalised,” a department spokesperson added.

On announcing that the UK will not participate in the EU’s Erasmus programme, Prime Minister Boris Johnson said that the “tough decision” had been made with an eye to a new UK scheme named after the mathematician Alan Turing.

The UK announced in December 2020 plans for a new £100 million scheme for students to study and work abroad to replace participation in Erasmus. It will seek to be more expansive in its opportunities for students by including universities beyond Europe, but critics have highlighted that it will not fund inward studies.

The long-established EU programme funds students’ study in other countries and in 2019 almost 650 students and staff from Northern Ireland took part.

Although not formally launched, the UK says that it plans to provide for around 35,000 students to go on placements and exchanges overseas starting September 2021.

However, changes to immigration processes between the UK and EU will now have an impact on students. UK nationals will only be able to stay in an EU country for 90 of every 180 days without a visa (Ireland is excluded) and EU nationals coming to the UK will now require a student visa if staying for longer than six months.

Following the announcement of withdrawal from the scheme by the UK Government, the Irish Government stepped in to fund the continued involvement of students from Northern Ireland in the programme, at a cost of around £2.1 million. Funding will be available to all full-time students attending third level institutions and will not be limited to Irish passport holders.

The Irish Government have insisted that the arrangement is a permanent one and will be available as long as students wish to avail of it.