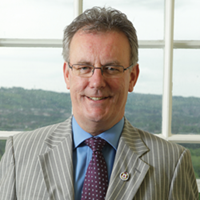 Government in Northern Ireland needs to shift its mindset from process to delivery, UUP leader Mike Nesbitt contends as he set outs his ambitions for the province.  Two years after contesting his first election, Nesbitt is politically the least experienced of the Assembly’s party leaders but is keen to draw on his career outside politics to influence policy.


“It has been a privilege, and an unexpected one,” he says of his time as leader so far.  “I have to say I’m finding it very enjoyable.  It actually can be great fun.  It is as much of a rollercoaster as I expected; politics is like that.”


His most enjoyable moment to date was a visit to Derry city and 13 hours of back-to-back meetings, with schools, Londonderry Chamber of Commerce, the City of Culture organisers, the Apprentice Boys and residents in the Fountain estate, among others.


Nesbitt also feels “incredibly fortunate” to be taking up the leadership at a time when his party “has a settled mood.”  He acknowledges that this “hasn’t always been the case, particularly recently”.  In his view, Tom Elliott’s decision to step aside “liberated” the party and allowed it to say: “We’re going to close the chapter on the last 14 years and paying for Good Friday.”


Nesbitt adds that he is not “beholden to anybody” in the party as he didn’t cut deals to win the leadership.  While criticised for making no policy commitments, he sees this as a strength which has given him the freedom to start a policy review.


Two positives for the UUP’s future stand out to him: the “huge” amounts of latent energy amongst a large membership (roughly 2,000) and goodwill towards the party, with non-members wanting it to become a “credible alternative” again.


The Derry visit was the first event in his Grounded initiative, which involves spending time and listening to local interest groups and residents in constituencies across the province.  The party, he admits, was once characterised as having “big house, gentrified” leaders.

“My first campaign was Westminster 2010, where we had a very high-end concept of this link with the Conservative Party.  The ultimate measure of success would have been if we had a place at the Cabinet table.”


However, people in working class estates around Newtownards didn’t want to talk about UK-wide politics.  Day-to-day issues, such as jobs, transport and hospital waiting lists mattered, and he sees himself as “simply giving the lead” to the party.


Nesbitt was accused of being patronising for asking to be ‘adopted’ by a family living in poverty.  He has now made two private visits to a household in Armagh, which took him up on the offer.  Asked how he responds to his critics, he classifies them as political opponents “who were clearly worried by it” and also representatives of groups working with people in deprived areas, who struck him as a vested interest.


“You could argue that they were trying to say: ‘Get off our patch.  You can only approach these people through us.’  Yes, there was criticism of it but there was also a lot of welcome for it.”


Nesbitt finds unionists “very relaxed” in Northern Ireland.  He cites the 48.5 per cent turnout in his Strangford constituency at last year’s Assembly election: “They’re not that fussed about what brand of unionist is returned to the Assembly, so it’s a two-edged sword.”


A united Ireland is “no longer a credible threat” and he thinks there is no better time to promote the benefits of the union, especially being part of the world’s seventh-largest economy.  The Republic’s economic recovery, he affirms, is also in Northern Ireland’s interests as its largest external trading partner.


“There is no reason why anybody shouldn’t enjoy being in the union, no matter what their politics, what their faith, what their culture, what their background is,” he adds.

Alex Salmond, it is put to him, dissents.  Scottish independence, Nesbitt accepts, poses a “serious” threat and Northern Ireland’s unionists must think through the consequences of that step for the province.  This will therefore be considered by John McCallister’s ‘constitutional commission’.


Nesbitt wants the Ulster Unionists to be “the most articulate advocates of the union right around the UK” with the commission providing an analysis of Scottish independence and devolution-max, and how to build North-South and east-west relationships with the Republic.


David Ford has criticised Nesbitt for promoting a shared future “when he’s not wrapping himself in the union flag” but the UUP leader asserts that this is still his ambition for Northern Ireland. 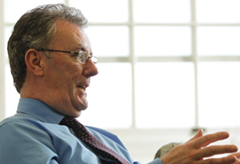 Significantly, he sees a single education system as a key long-term goal, with an increasing level of shared education in the interim.  He wants all five Executive parties, Sinn Féin and the SDLP included, to overtly sign up to that goal as the “end game”.


Two factors, in his view, will determine if a local community is ready to educate all its children in one place:

“I don’t think we should get hung up or criticise a community that isn’t as ready as others.  Just accept pragmatically that area A is ready, area B needs a couple of years, area C maybe 10 years.”


Peter Robinson’s keynote speech in October 2010 on the subject came five months after he lost his East Belfast seat to Naomi Long.  The DUP backed that wording up with policy proposals in its Assembly manifesto but has rarely discussed how those would be put into practice.


Ethos is an obstacle for the Catholic Church, as its northern education spokesman Bishop Dónal McKeown told agendaNi in 2010 (issue 42, pages 22-26).  Pressed on that, Nesbitt comments that ethos is sometimes used defensively, to avoid change.


He puts forward his own ethos as: “Inside every child in Northern Ireland, there is a spark of ability, creativity and talent, and what we have to do is find that spark and not get hung up over whether it’s academic or vocational or sporting or artistic.  And not say that one is better than the other, which is what we have traditionally done.”

Nobody would have heard of Rory McIlroy, he argues, if he had been forced down a purely academic route “whereas what he has been allowed to become is arguably the greatest ambassador for Northern Ireland in a generation.”  He thinks that he and Bishop McKeown would agree on that. 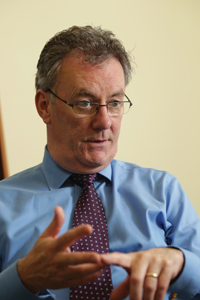 The Alliance Party, though, has been working through a shared future since its foundation in 1970.  In response, Nesbitt credits the UUP for bringing peace in 1998, as the largest party at the time.  When the point is put to him again, he contends that Alliance “walked away” by leaving the cross-party working group in May.


Nesbitt has previously criticised the public sector for being “absolutely obsessed with process with no focus on outcomes”.  The public sector’s focus, in his view, is currently on inputs rather than outputs, whereas businesses want to minimise inputs as those are the cost centres.


Political leadership and a sense of what makes ‘profit’ for government, he states, are crucial for turning that around.


A three-step process follows on from that: “That is what success looks like, this is where we are, how do we get from A to B?”  The attitude of “that is not the way we do it” has to be challenged at every opportunity.