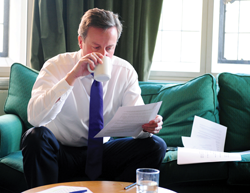 UCUNF secured Jim Nicholson’s re-election in June 2009 but failed to secure any local seats at the May 2010 general election, despite campaign support by Cameron and his shadow Cabinet.  Owen Paterson took office as Northern Ireland Secretary, as expected.

Local Conservatives blamed UUP members for stalling the campaign.  Most candidates were selected late and only two were Tories: Irwin Armstrong and Ian Parsley.  However, the national party continued to explore a continued link with the UUP after the election.  Its approach was led by party Co-Chairman Lord Andrew Feldman, a close associate of Cameron.

Tom Elliott succeeded Empey in September 2010 and preferred the UUP returning to the pre-1972 relationship: a separate party whose MPs would take the Conservative whip.  Elliott persuaded the Conservatives to stand aside in the Assembly poll, which was resented locally.
Talks proceeded slowly before Feldman presented an apparent ultimatum to the UUP in November: disband and re-form as a Conservative-led regional party.  This was immediately rejected, making the final break inevitable.

The new party, unveiled by Feldman on 31 January, will be known as the ‘Conservative and Unionist Party of Northern Ireland’.  At its formal launch, in late March or early April, the party plans to announce a local board and an observer on the national board (becoming a full member if the local party grows).  A leadership election is expected later this year and these changes will put the organisation on a par with the Welsh Conservatives.

With no regional election planned until the European poll (in June 2014), the party aims to build up its membership (386 as of 31 January).  Feldman will also have an eye on the next general election, due in May 2015, as the Conservatives were 19 seats short of a Commons majority last time round.

The Conservatives’ best known local member, Lord Trimble, now has a low local profile but is highly respected in Westminster and was once mooted as a possible Attorney-General.  Trimble sits on the Tory benches with two other local peers (Glentoran and Ballyedmond) and Belfast-born Lord Mawhinney, who rose to the Cabinet.

Reg Empey (now a UUP peer) has said that the UUP-Conservative schism could divide the centre ground but the Tories claim that this will offer extra choice to voters, in the light of the 44 per cent apathy in last year’s Assembly election.