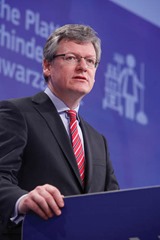 During a visit to Belfast, Employment Commissioner László Andor answers Peter Cheney’s questions on the European economy and youth guarantee policy, which seeks to tackle unemployment among under 25s.

What is your general impression of the European economy?

The European economy is in recovery phase but it’s a very fragile, uneven recovery and a lot needs to be done in order to make it a sustainable and job-rich recovery. At this stage, the number of new jobs is minimal. You also have a big problem with the quality of the new jobs that have been created in the recent period.

Maybe too many part-time jobs?

Too many atypical jobs. In the UK, it’s the so-called ‘zero hour contracts’ which release a big share of the new jobs. Of course, it’s better to have a job than not to have one but it’s not good when the new [economic] cycle leads to a segmentation of the labour market, when especially the young people only find poor quality jobs, and obviously this has to be the focus of the governments.

How should the youth guarantee be implemented?

We asked all the member states to establish a youth guarantee implementation plan. Most of the member states delivered it before the end of the last year and the rest have been catching up in the spring. Those [countries] who needed to hurry up will also get additional funding from a youth employment initiative.

The key is how well the national governments can not just continue the efforts that have already been there but also build on existing models, like the youth employment scheme here, in order to ensure that certain qualitative aspects of the youth guarantee are met.

For example, a four-month deadline. We don’t want governments just to spend on training courses. We want them to commit to a deadline that no young person should be allowed to be unemployed for longer than four months. That has been agreed on an EU level but this will only happen if institutions, namely the public employment services, can guarantee a match between the jobseekers and the opportunities on the other side.

So they should – once they register the young people – as soon as possible try to identify what is the best match for this young person, in terms of training, apprenticeship, a proper job perhaps which may not be found without the youth guarantee effort.

Or further learning opportunities because, for some people, going back to school for a year is a solution. It may be a bridge to a more successful search.

The Conservatives want to repatriate employment policy from Brussels. What is your view of that?

It is, in a way, a shared area now. It’s not that employment policy will be run from Brussels. Some aspects, such as how to use the Social Fund, some policy co-ordination through the European policy semester and a small proportion of employment legislation, are at the EU level.

I think what is at the EU level is justified because, for example, legislation in order to protect minimum standards of employment is important in order to protect the single market, and to ensure that there is no ‘social dumping’ and unjustified advantages or disadvantages in the single market of the European Union – that other countries cannot undercut your companies by ignoring decent employment conditions.

I think this is very important to maintain. If some of the legislation is burdensome, obviously there can be an effort to streamline or improve the quality of this or that legislation.

A Hungarian economist, László Andor has been the EU’s Commissioner for Employment, Social Affairs and Inclusion since February 2010. This remit includes skills, health and safety, pensions, poverty and labour migration. He has a particular interest in integrating the Roma people into society. László has had a long academic career and is affiliated with the Party of European Socialists. He is married with three children and fluent in English and Russian.