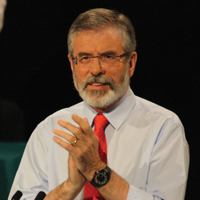 With the glorious sunshine and heat, and a long journey to County Kerry, Sinn Féin members might have been forgiven for making alternative plans for 25-26 May. Yet approximately 2,000 of 6,748 members attended its árd fheis. Membership was up by 1,750 since March 2011. There was music, drinking, laughter and some interest in the Republic’s soccer game, but throughout the weekend the party’s evolving strategy was articulated in well-choreographed speeches.

Martin McGuinness emphasised reconciliation and advancing the peace process. On Friday night he spoke of how party members have been in “initial discussions” with civic unionism and the main Protestant churches. With the “potential that now exists to move forward politically and democratically to a new republic,” he told delegates, the party has a responsibility “to reach out to unionists and to others to engage with them about the past and indeed even more importantly about the future.”

McGuinness picked up the theme of reconciliation the next day, telling members that “as a proud republican I not only recognise the unionist and British identity, I respect it and in return all I seek is my Irish identity and tradition to be respected as well.” He has previously stated that unionists are Irish.

Dissidents were condemned, their actions underlining “their opposition to progress and their rejection of tolerance and change.”

When asked about national reconciliation, Education Minister John O’Dowd told agendaNi that Sinn Féin is “unashamedly campaigning for a united Ireland but that united Ireland, within that, will have around one million people who currently fall under that broad umbrella of unionism.” The party’s aim is to understand “what guarantees, what safety mechanisms they believe in,” as well as unionists’ concerns about the future “and what opportunities the future holds for them as well.”

Dealing with the past is part of the reconciliation process for many members, including Robert McClenaghan. A community activist, his work includes two and a half days a week in the party’s advice centre on the Falls Road. “Some of the dialogue is going to be hard, fearful, tearful, but we think it’s necessary because we think it’s the last big major piece.” With political representation for all, and policing “by and large dealt with,” dealing with the past was the “big piece of the jigsaw yet to be fulfilled.” This includes families who lost loved ones on both sides.

Gerry Adams focused on economic and social policies in his leader’s address: the twin narratives of anti-austerity in the South and “the business of delivering for citizens” (despite cutbacks) in the North. He credited the Executive with retaining and creating new jobs, falling unemployment, and Sinn Féin ministers for protecting investment in education and the creation of the Social Investment Fund.

Unemployment in Northern Ireland fell by 0.1 per cent over the last year and currently stands at 7.1 per cent.

“The political institutions in the North need to move to the next stage: the transfer of fiscal power to the Assembly and Executive,” he told delegates.

The call for fiscal powers was echoed by northern elected representatives. Newry and Armagh MP Conor Murphy believed that securing more fiscal powers is one way of allowing the Executive “to make economic interventions in our own economy in the North [and] to grow the all-island economy.” For Employment and Learning Spokesman Barry McElduff, more fiscal devolution is part of the party’s need to be “imaginative” and to maximise opportunities for people, along with “more self-confidence, managing the economy wisely, listening to lobby groups.” His said that the party’s specific policy priorities in the Assembly must now be “education, health, economy.”

How Sinn Féin would use those fiscal powers remains uncertain. While a party spokesman pointed to the options of lowering corporation tax and fuel duty tax, tax policy is “not an area that one could be specific about without first being in possession of all the facts and figures,” regarding revenue, public expenditure and liabilities.

Austerity, of course, is not confined to the South. For an unemployed member from West Tyrone, Sinn Féin’s budgetary options within the block grant’s confines can be “hard to stomach at times because we’re being slaughtered for it,” by some members of the public. Other people, however, are “well capable of rising above” such criticism. The party’s ongoing challenge is to “try and keep the effects of the recession to a minimum if possible.”

North/South co-operation is an area of overlap between economic and nationalist agendas. McElduff says that the party is utilising this avenue, citing matters he had raised at a recent meeting of the British-Irish Parliamentary Assembly in Dublin: an expansion of the out-of-hours, cross-border GP service, funding for the A5 road upgrade and an independent inquiry into the murder of Pat Finucane. On the six North/South implementation bodies, he stated that they could do with “more powers” and “expansion”.

Difficult economic times also bring opportunity, according to some members. McClenaghan says that 30-35 people out of every 100 who visit his advice centre are Protestant. Tough times mean “an opportunity for Sinn Féin to make positive political gains in reaching out.” The economic situation for those constituents had become “so dire that they were prepared to take a big deep breath and to walk around the so-called ‘peace wall’.” He speculated that there could be other Protestants considering doing the same.

Members and elected representatives seemed unanimous that even with different political narratives for North and South, unity remains the main objective. All current actions are linked with it. “Building political strength is our goal,” says McClenaghan. The party’s “strategic political objective is to create such a mass that it’ll move from a 6:26 to a 32. It’s building that political strength in the meantime.”

163 of 176 motions were accepted by the party, and now become party policy. Members supported calls for a bill of rights, a comprehensive housing strategy for the province, an end to academic selection in Catholic schools and retention of the educational maintenance allowance.

None of the 26 motions on the economy or workers’ rights related exclusively to policy in Northern Ireland. Among the rejected motions were those calling on the Israeli Ambassador to be withdrawn from Dublin and a temporary 2.5 per cent corporate levy on profits in the South.