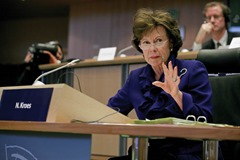 Europe is moving towards a single telecoms market which is likely to result in lower charges.

The European Commission has adopted a new legislative package on building a single telecoms market. The ‘Connected Continent’ proposals were published in September and follow on from support for such a market from heads of state and governments in March of this year. Digital Agenda Commissioner Neelie Kroes wants to take it through the European Parliament by next April.

Commission officials see the fragmentation of the union into 28 national telecoms markets as an obstacle for economic growth. Europe has been working on telecoms policy since 1985 and its work is best known for reducing roaming and cross-border calling charges.

As with most EU policy areas, telecoms law is drafted by the Commission and then considered by the Council of Ministers and the European Parliament before being approved. The key players are therefore:

• the Transport, Telecommunications and Energy Council; and

The Internal Market and Consumer Protection Committee will also have a key role to play. Its UK members include chairman Malcolm Harbour, Trevor Colman and Catherine Stihler. Phil Prendergast is the Irish member.

Speaking in June, Kroes contrasted Europe’s situation with the USA’s single telecoms market. A “tangle” of systems in Europe was “a headache for operators who want to think big and compete globally.”

Telecoms proposals are usually not divisive and the main groups in the Parliament generally support more European integration. Left-wing and euro-sceptic MEPs may be wary, claiming that international operators could put national brands out of business. The change would also transfer some powers from member states to Brussels at a time when public cynicism about the EU is high.

In response, the Commissioner says that a single market would cut costs and prove to constituents that Europe can work for them. It would also be a major political achievement for her as she prepares to leave office.

Sinn Féin Enterprise Spokesman Phil Flanagan said that this demonstrated the “positive impact” of EU membership and said that the Commission had “no option but to legislate” after mobile phone companies broke their promises.

“This, however, must only be the start of the journey,” he added. “Much more action needs to be taken to remove remaining extortionate charges, particularly when it comes to data roaming, where consumers continue to pay over the odds for a service that costs mobile phone operators very little to provide.”