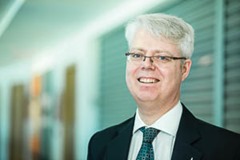 After four years of discussion, Britain’s renewable developers are frustrated with the slow progress on electricity market reform and want clarity so that they can get on with developing green energy.

RenewableUK’s Director of Policy, Gordon Edge finds that the concept is “a bit of a misnomer … because the market isn’t really being reformed.” The ‘big six’ utilities are being left alone and the trading arrangements are untouched. It’s about getting new low carbon – but not necessarily renewable – investment carried out.

“If it were just about renewables, we would just leave the renewables obligation alone because that’s made the UK one of the best wind markets in the world,” Edge comments. The low carbon definition brings nuclear and carbon capture and storage into the equation.

At the same time, the UK Government is implementing the levy control framework. This would have been introduced regardless of EMR but has made the process much more complicated. The framework is a “zero-sum game” which moves funding between sectors and leads to tensions between onshore wind, offshore wind and solar developers.

Another criticism is that the Government is trying to “micro-manage everything”. Contracts for difference – unlike the renewables obligation certificates – will only be awarded when planning permission and a grid connection are in place.

Edge predicts that developers will end up “having to do a lot of development work and bringing [their] project through planning” with the risk that the financial report will not come forthcoming. The amount of money on the table needs to be made clear.

In political terms, the Conservatives were deploying a “keeping that nasty onshore wind down” message to shore up their right wing but the alternatives – offshore wind and solar – will cost more.

Labour might “paint itself into a corner” by putting such a sharp focus on the cost of energy for consumers: “They may end up being against us by default even though they’re making all of the right noises.”

In the short term, Britain has a “fantastic” outlook for renewables: adding 1GW per year in wind energy. Beyond 2020, though, the Government’s desired approach is a competition for the cheapest energy source which adds to the uncertainty.

Scotland accounts for 59 per cent of the UK’s renewable energy capacity. Compared with independence, Edge expects that ‘devo max’ may lead to “as much if not more tension” between London and Edinburgh as the Scottish Government will become “increasingly autonomous” in energy policy.

Energy Secretary Ed Davey has subsequently announced his intention to ban electricity generation from coal by 2025 and bring forward a community energy strategy.

His comments were welcomed by RenewableUK which, in turn, called for all political parties to commit themselves to a clear 2030 decarbonisation target. On one day in October, wind provided 24 per cent of the UK’s electricity supply – a new record which equates to the powering of 17 million homes. The sector made up for the lost capacity from five nuclear power stations which experienced outages.