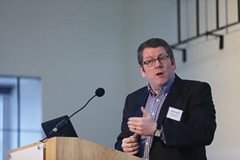 Nearly eighteen months since the Minister for Social Development announced his intention to remove the Housing Executive (NIHE) from the public sector, there remains little detail on the financing of this operation. This is surprising since the justification for deciding to privatise the NIHE appears to rest entirely on financial considerations.

In January 2013, Minister McCausland stated that the objective was “the development of a new landlord function outwith the public sector… enabling access to private funding to allow for suitable investment.” According to the Minister, there is a need to invest £5 billion to maintain and improve the NIHE’s housing stock; money which is not available from public funds, hence the need to privatise.

There is an element of political spin here as the £5 billion is a gross figure and does not take in account the rents that will be paid over the thirty-year planning frame. In 2011, a PwC report estimated that the NIHE could need to borrow as little as £60 million in the medium term.

However, the remainder of this article focuses on the public subsidies needed to attract private sector investment. This has been the experience of housing stock transfers in Britain over the past thirty years.

The model of financing stock transfers in Britain contains two major elements. First, the tenanted market value (TMV) is calculated. The National Audit Office (NAO) defines TMV as “the net present value of the … projected stream of income from renting out the transfer stock, less its expenditure stream”. The TMV will then either be positive (i.e. a surplus is expected), in which case this figure will be used to agree a transfer price to be paid by the new landlord to the Government. Or, if the TMV is negative (i.e. a deficit is expected), this will need to be paid by the Government to the new landlord in the form of a dowry.

Second, any proceeds from the transfer are used to pay down the historic housing debt of the public body. Often these proceeds are not enough to clear the debt. However, to attract private financiers, the new landlord must start with a clean slate. This means that any over-hanging historic debt must again be paid from the public purse. In practice this has meant that in England (up to 2012), the Treasury paid out £1.5 billion in dowries and £5.3 billion in over-hanging historic debt repayments. This was to subsidise private sector loans of £21.6 billion, which need to be paid back in full.

Further, the financial landscape has changed since 2008. Before the financial crash, transfer housing associations could be confident of securing loan facilities for a full thirty-year term. This has virtually disappeared now, with ten-year terms becoming the new norm, resulting in housing associations increasingly accessing the bond market. For example, last year Poplar Harca in the east end of London raised £140 million in bonds, and in Northern Ireland the Fold Group secured £17 million through this route.

So what does this mean for the NIHE? According to the Savills report, the NIHE housing stock is of the best quality that they have inspected. However, there will be some stock in a poor condition resulting in a negative TMV, leading to government dowries. In addition, the NIHE has a historic housing debt in the region of £500 million.

All this leads to a series of questions: How is the housing stock to be valued (TMV or an alternative model)? Will gap funding be needed or available? Who will pay the historic debt? How is the private debt to be raised?

In conclusion, it is worth remembering that the PwC report did not advocate the course of action currently under way, as the stock transfer “option is unlikely to maximise value for tenants, or complement public policy aims, and the overall deliverability is low. This option is unlikely to attain the necessary level of political consensus.” Over a year since the transfer announcement, these words appear to be an accurate summary.

Stewart Smyth is a lecturer in accountancy at Queen’s University Belfast.