Figures depicting growth of the Northern Ireland economy mask the real time effects of rising inflation and a looming recession.

In July 2022, results for the first quarter of the year indicated a 15-year high for economic output in Northern Ireland, just short of a record high registered mid-2007. However, it is recognised that figures lag the real time reality that rising inflation rates make a protracted recession imminent.

Northern Ireland’s economic growth is set against a backdrop of steep economic decline during the initial Covid lockdown stages of the economy. While current data shows that the economy has bounced back quicker and stronger than expected, outstripping the UK’s recovery rate in some areas, it is important to note that the local economy has still not fully recovered to levels prior to the 2008 financial crash (figure 2).

Q2 of 2022 is expected to reflect recovery to pre-2008 levels but a recession is not expected to be evident in official data until later in the year, given its retrospective nature.

In November 2021, Office for National Statistics (ONS) data for the third quarter of 2021 showed that Northern Ireland had outperformed other regions of the UK in its economic recovery, however, output still sat 0.3 per cent below pre-pandemic levels at the end of 2019.

Indications of a potential recession existed prior to the Bank of England’s recent announcement that it was raising interest rates in an attempt to head off predicted inflation of potentially 13 per cent by the end of 2022 becoming embedded in the economy.

Although limited in their data, consumer and business surveys carried out by banks often provide a more real time snapshot of shifts in the economy than older official data. In August 2022, Danske Bank’s Consumer Confidence Index highlighted a second successive quarter of consumer confidence decline, highlighted by the fact that the 26 per cent of people who expected their financial position to worsen over the next year in Q4 of 2021, rose to 40 per cent in Q1 of 2022 and over half by Q2 of 2022.

At the time of the survey, inflation had hit 9.4 per cent and nearly half of those surveyed said they expected to spend less this year, but this figure is likely to rise as inflation moves towards an expected 13 per cent.

For businesses, Ulster Bank’s monthly survey in May 2022, a reliable indicator of the private sector, pointed to a significant fall off in construction and retail activity as an early indication that economic recovery may have peaked. By July, it confirmed that the economy was losing momentum, with falling confidence hitting business performance. 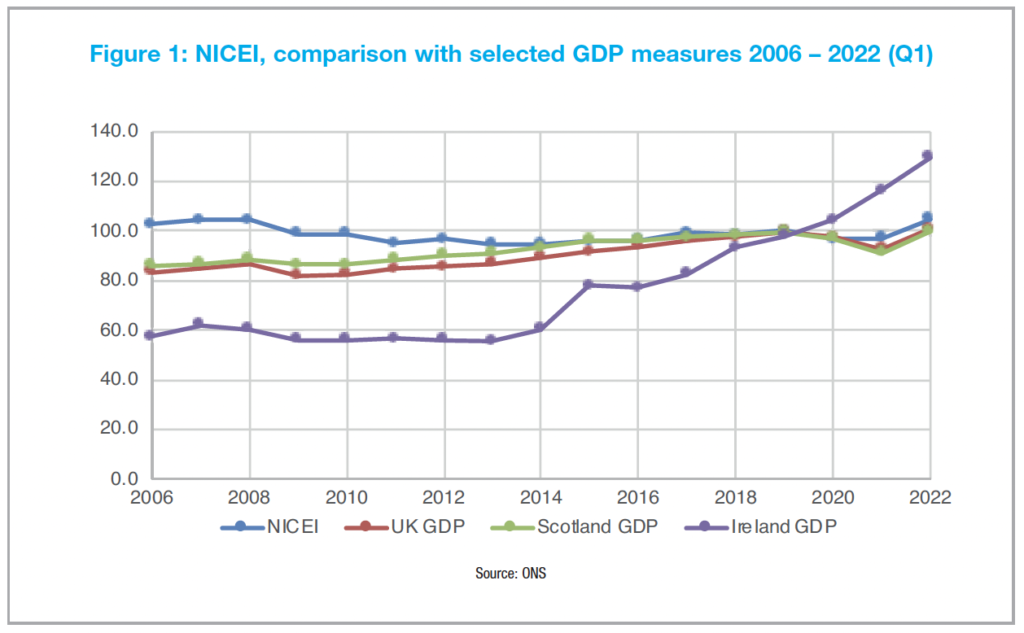 Northern Ireland’s economy has for a long time lagged behind the performance of the UK’s economy, as evidenced by a large productivity gap of some 17 per cent below the UK average, making it consistently the worst economic performer of any UK region. This is telling when it is kept in mind that the UK economy’s own productivity growth has been stagnate since the 2007-08 financial crash.

Any level of recession in the UK’s economy, therefore, will almost certainly be reflected in Northern Ireland.

In August, the Bank of England (BoE) moved to curb inflation, estimated to rise to 13 per cent by the end of 2022, by rising interest rates 0.5 percentage points, the highest rise in 25 years.

Levels of recession are predicted to match that of the 1990s and household incomes could fall by their largest amount in 60 years. The head of the BoE has said that the squeeze on living standards was inevitable and necessary to bring inflation under control and avoid a harsher economic downturn later. 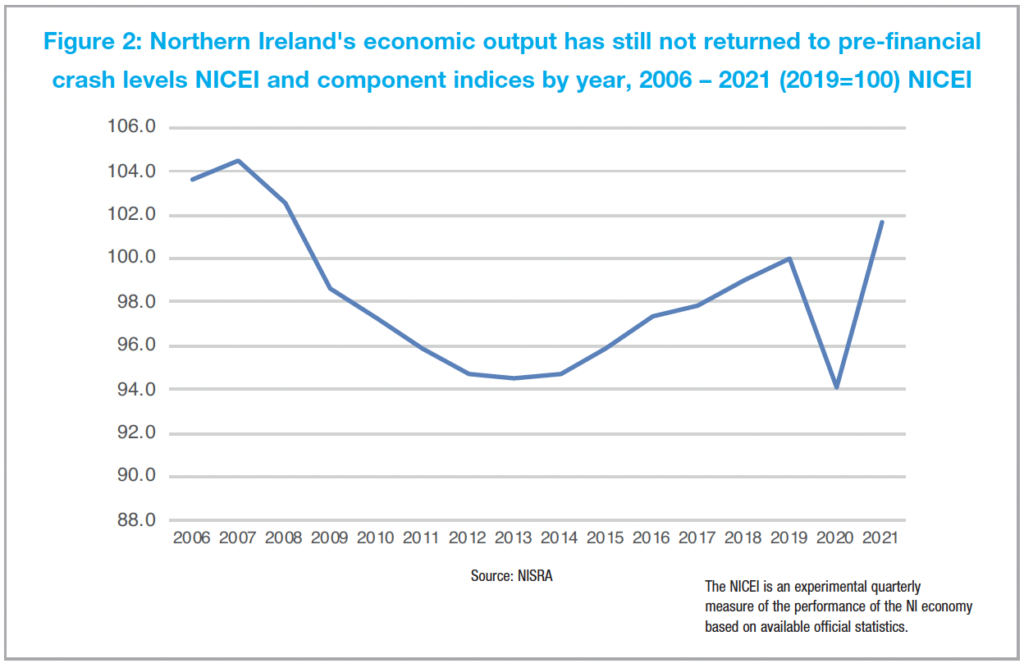 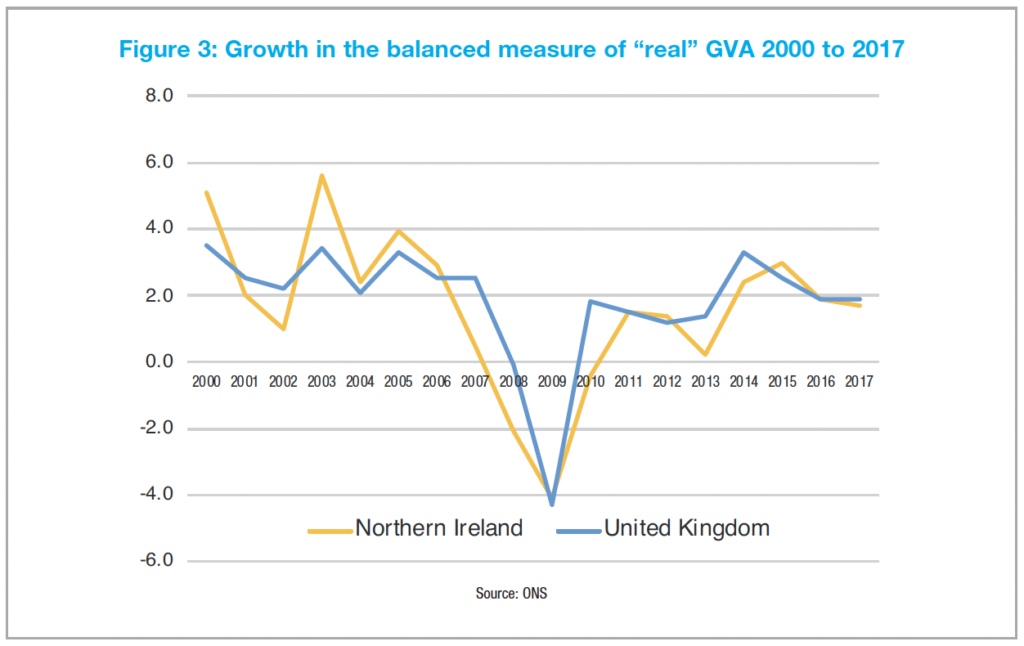 Consumer price inflation, which hit a fresh 40-year high of 9.4 per cent in June, is already the highest among the G7 group of large economies and the bank forecasts the economy will slide into a 15-month recession later this year, with GDP shrinking by more than 2 per cent from peak to trough.

The downgrading of the UK economy’s growth predictions is largely related to the rise of wholesale gas prices due to Russia’s restriction of supplies. While both the US and the eurozone have also seen rising interest rates to tackle inflation, the UK’s greater exposure to energy price shock than the US and less protection by government measures than the EU make for a bleaker economic outlook.

However, it is important to note that the UK’s economy was already underperforming prior to Russia’s invasion of Ukraine. Despite being able to mitigate the pandemic quicker than expected (in September 2021 the UK economy sat 0.6 per cent below pre-pandemic level despite an original 4 per cent drop predicted by the OBR), economists estimate that when compared to eurozone and US economies, the UK economy is around 2-3 per cent below where it might have been without Brexit. 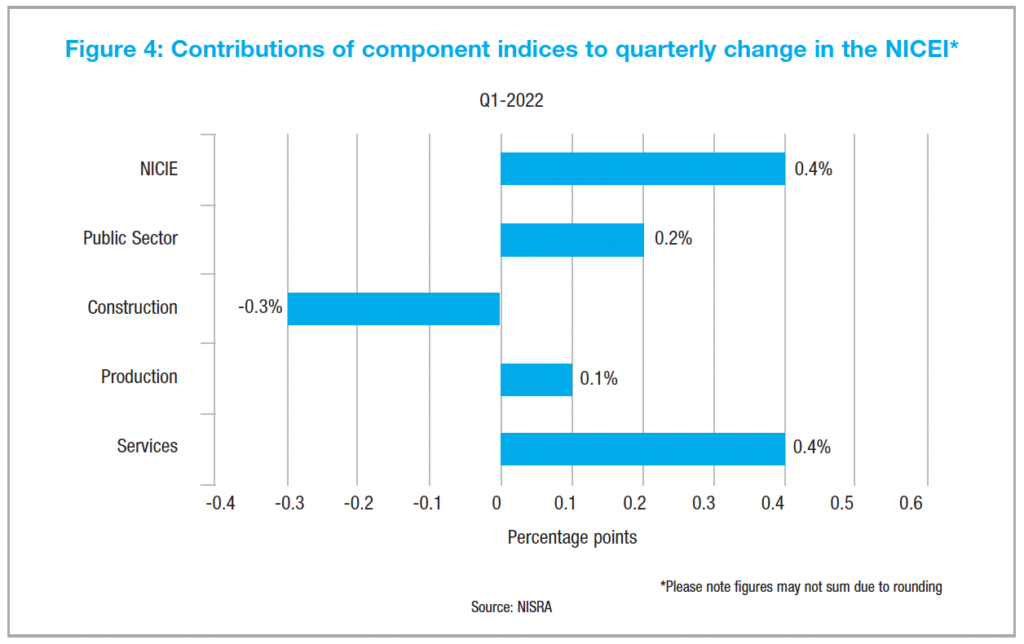 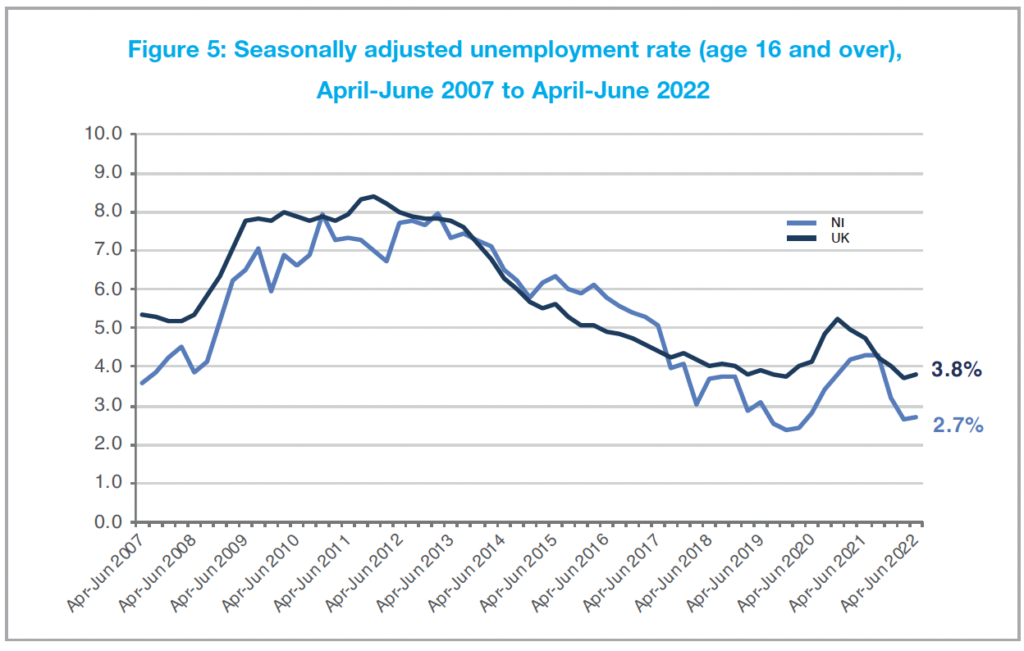 Longer-term predictions estimate that the UK economy will forgo 4 per cent of economic activity it may otherwise have had.

Recent research carried out by the London School of Economics, estimating the longer-run impacts of Brexit, suggest that Northern Ireland will be the UK regional economy least impacted by Brexit, largely due to the Protocol.

The research estimates that the UK economy as a whole will be 1.3 per cent smaller when compared to a no Brexit scenario, but that Northern Ireland’s 0.7 per cent hit will be the smallest of the regions.

The true impact of the Protocol has yet to be realised, with full implementation not yet in place and a move by the UK Government to domestically remove some of the previously agreed arrangements.

ONS figures at the end of 2021 placed Northern Ireland as the fastest recovering region of the UK, albeit from a low base.

However, what has become clear is that Brexit and the Protocol measures that are in place currently have shifted trade patterns. The Irish Central Statistics Office (CSO) recently highlighted a 34 per cent (£250 million) increase in trade from Northern Ireland to the Republic of Ireland in Q1 2022, compared to the same time last year.

It is estimated that the value of goods moving north to south increased by 65 per cent (£3.35 billion) in the first year under the Protocol and the trend looks set to continue in 2022. Goods moving to Northern Ireland from the Republic grew at an even larger rate, rising almost 50 per cent in the first quarter when compared to the first three months of last year.

The UUEPC’s Spring Outlook 2022 highlights that the demographics of Northern Ireland’s working population is changing. Compared to a 260,000-person increase in the working age population in the three decades to 2010, the last decade has seen those aged 16-64 increase by just 15,000, with an estimated growth of just 3,000 in the decade to 2030.

While historically such a problem would be managed by increasing migration to bolster the labour market, Brexit and the pandemic has seen the number of non-UK national insurance applicants fall to just 2,000 in 2020/21, compared to an annual average of 15,000 between 2010 to 2020.

Additionally Northern Ireland’s economy suffers from a ‘missing middle’. The education system is now retaining more people who would previously have entered the labour market with medium skill qualifications and employers continue to put value on higher qualification attainment, meaning a medium skill gap and a squeeze out those of low or no skills.

In May 2022, official figures showed that Northern Ireland’s labour market hit a record 779,000 people in employment. However, by July, indications were that job market recovery was slowing and it is now recognised that amidst a tight labour market, people and skills remain the largest challenge. Contextually, it is important to note that employment growth in Northern Ireland still falls well below the UK average. Northern Ireland continues to have the worst employment profile of the UK regions and has the highest inactivity rates. 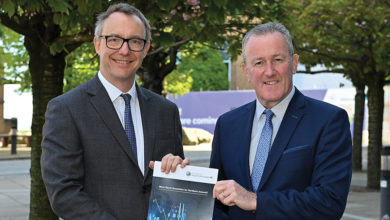