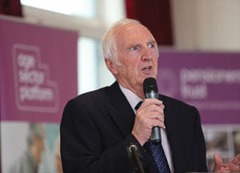 The poorest pensioners here are missing out on much needed help with their energy bills because Northern Ireland was excluded from a valuable fuel poverty scheme set up by UK Government almost four years ago, according to a leading older people’s charity.

Age Sector Platform claims that Northern Ireland’s exclusion from the Warm Home Discount means around 100,000 pensioners here are missing out on £140 towards their electricity bill every year, despite pensioners in England, Scotland and Wales receiving the valuable credit.

Last month, the Department of Energy and Climate Change consulted on a one-year extension to the scheme, with a wider fuel poverty review planned for 2015. Age Sector Platform is calling for the scheme to be extended to include low income households in Northern Ireland.

Michael Monaghan from Age Sector Platform explains: “The Warm Home Discount was launched in April 2011, and helps over two million low income and vulnerable households in England, Scotland and Wales with their energy costs each year. The scheme is set out in legislation and requires energy suppliers to provide a rebate to all qualifying customers. Despite the fact that Northern Ireland has the highest levels of fuel poverty in the whole of the UK, we have been excluded. The situation is totally indefensible.”

“For the past four years, we have been asking older people what their top concerns are through the Northern Ireland Pensioners Parliament survey. Every year, keeping warm in winter has been the biggest worry for pensioners here; with three out of four older people selecting it as a top concern for them.”

“As we approach the coldest time of the year, temperatures fall and concerns rise for many pensioners struggling to make ends meet. A discount of £140 could make a huge difference to poorer pensioner households across the province, for whom the failure to keep warm can often have life or death consequences. Five hundred older people dying each winter in Northern Ireland due to the cold should be a wake-up call for all those in positions of power. More help is clearly needed; and the Warm Home Discount provides an ideal channel through which this help could be provided to the most vulnerable households in Northern Ireland.”

The Warm Home Discount was launched in April 2011. It currently provides £140 off electricity bills to over 2 million households in England, Scotland and Wales. The scheme is set out in legislation and requires suppliers with over 250,000 domestic customer accounts to participate.

By the end of the current phase of the scheme in March 2015, over £1.1 billion will have been spent by participating energy suppliers on eligible customers. Although the levels of fuel poverty differ significantly across the UK, the scheme has a mechanism that ensures that no supplier is disadvantaged by having a higher number of households eligible for support.

The scheme uses data matching to ensure households in receipt of pension credit automatically receive their rebate without having to take any action. According to the Department of Energy and Climate Change, fuel poverty is a partially devolved issue. The devolved administrations have the power to affect certain aspects of fuel poverty policies (e.g. energy efficiency programmes) but not others (incomes and energy market conditions which impact on fuel prices).