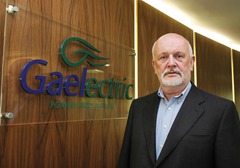 Gaelectric Energy Storage is finalising its application for planning approval on its £300 million Compressed Air Energy Storage (CAES) project located to the south of Larne.

Later this year, Gaelectric Energy Storage (GES) will submit a planning application to Northern Ireland Planning Service for permission to construct a 268 megawatt (MW) power station on a site to the south of Larne. ‘Project-CAES Larne, NI’, as the project has come to be known, will be the second power station constructed in Europe that has the capability to store energy as compressed air in caverns created within geological salt layers at depths of 600m to 800m below ground. When completed, the new facility will be capable of generating 268 MW of electricity for periods of up to six hours while also providing a range of other services that will assist system operators to improve the efficiency of the transmission grid, lowering costs and increasing the security of energy supplies in Northern Ireland.

Gaelectric Energy Storage is a division of Gaelectric Holdings plc which is one of Northern Ireland’s largest and most progressive renewable energy companies.

Gaelectric Group CEO, Brendan McGrath, says: “This will be the first CAES project developed in Europe in the last 40 years. It will also be a demonstration site for a pipeline of further CAES power stations in Great Britain and Europe, establishing Northern Ireland as the innovation hub for energy storage in Europe.”

Established in 2004, Gaelectric has grown to become one of Northern Ireland’s leading developers and operators of wind farms. In 2013, the Company energised its first Northern Ireland wind farm at Carn Hill near Newtownabbey with six Enercon wind turbines and a total generation capacity of 13.8 MW. The next three years will see Gaelectric energise a further 123 MW of wind power in Northern Ireland over eight projects commencing later this year with the energisation of its 42 MW Dunbeg wind farm in County Londonderry using Enercon turbines.

Brendan McGrath says: “As Northern Ireland has made progress towards achieving its target to generate 40 per cent of electricity demand from renewable power sources by 2020, the implications for the Northern Ireland transmission system have become clearer. New system management tools are required to balance the generation portfolio with end user demand on a minute by minute basis. Some generators are limited to when they can provide power namely wind, solar and tidal. This creates imbalances that need to be effectively managed so the end user receives a constant uninterrupted supply of energy.

“Key to achieving this level of penetration of renewable power will be an effective means to store energy. As developers of wind projects, we recognised this fact and established an energy storage division in 2006 with the sole objective of identifying storage technologies that could be put to work in the energy market. We identified Larne with its salt deposits and CAES technology as a way to store energy and also provide a range of other services and benefits in the operation of transmission grids. From this beginning, ‘Project-CAES Larne, NI’ was born.”

Compressed Air Energy Storage (CAES) stores energy by compressing fresh air into storage caverns created within geological salt layers deep underground. Off peak power is used to compress this air, allowing this stored energy to be utilised later to drive turbines that generate power to supply electricity when demand returns or as power is needed by system operators. CAES technology is in use at two existing CAES stations located in the United States and Germany, with a third project currently under development in Texas.

From the outset, ‘Project-CAES Larne, NI’ has been recognised as a strategically important infrastructure project for Northern Ireland and within the Single Electricity Market on the island of Ireland. It will help Northern Ireland maximise its comparative advantages in the generation of electricity from onshore wind. It has also been part of Project Spire, an EU Interreg IVA-funded cross border research programme led by the University of Ulster and Dundalk Institute of Technology which is examining how wind energy may be stored and managed in the all-Ireland energy market. Gaelectric undertook an exploratory drilling programme at locations to the south of Larne in the autumn of 2013 consisting of two bore holes drilled to depths of approximately 900 metres. Various geo-physical testing and surveys have confirmed the presence of suitable salt deposits at the right depths for CAES.

In 2012, Dresser Rand, the international engineering group and world leaders in the supply of compression technologies to the energy sector, agreed a strategic alliance with Gaelectric to develop ‘Project-CAES Larne, NI’ for Northern Ireland and then to roll out a pipeline of other CAES projects across Great Britain and Europe. 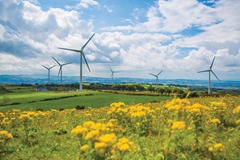 In October 2013, ‘Project-CAES Larne, NI’ was included in the list of Projects of Common Interest (PCI) under the EU’s trans-European energy infrastructure (TEN-E) Regulation. This project is the only CAES project to be designated in this way by the EU. For a project to be included in the list, it has to have significant benefits for at least two member states, contribute to market integration and further competition, enhance security of supply, and reduce CO2 emissions.

‘Project-CAES Larne, NI’ will generate significant economic activity locally and throughout Northern Ireland. Brendan McGrath added: “We have commissioned an assessment of the economic and system impacts which shows indicative estimates for total jobs, both direct and indirect, created during construction of up to 470 Full Time Equivalents (FTEs). During its operations, the indicative figure for direct and indirect new jobs is 50 FTEs. The assessment puts a figure on Total Gross Value Added during construction at around £54 million with a total exchequer contribution attributed to the Project in the region of £8 million.”

He added: “The benefits to the transmission system have been estimated under a number of scenarios with an estimated average total reduction in system operating costs of 1 per cent to 2 per cent per annum, or up to £62 million per annum, and a potential price reduction to end users of approximately 1 per cent.”

The Project’s contribution to reductions in Northern Ireland’s CO2 emissions through improved efficiency in the operation of the transmission system is also significant at approximately 71,000 tonnes of CO2 equivalent per year.

As a company, Gaelectric is committed to ensuring that communities where its projects are located should also benefit from its projects. Gaelectric will establish an independently administered fund to support local projects which improve the social infrastructure of Larne and the environs of ‘Project-CAES Larne, NI.’

Taking Views on Board

Brendan McGrath says: “The Project Team we have put together includes leading Northern Irish and international engineering, environmental and design companies that are determined to make ‘Project-CAES Larne, NI’ a reality.

“We have been consulting extensively with the local community, public representatives and other stakeholders to inform them of the progress we are making and to take their views and inputs on board. So far, we have held five rounds of community consultation with well attended events taking place in Larne, at Glynn Village and on Islandmagee. We have also held smaller focus group meetings with local residents and various other interest groups on the Project. The feedback we get is an important part of the development process and is very much key to designing a buildable project.”

Further information on Project-CAES Larne, NI is available at www.project-caeslarne.co.uk

A BBC Radio 4 ‘Costing the Earth’ programme recorded in May which features Project-CAES Larne, NI can be listened to online at www.bbc.co.uk/programmes/b042zsy5