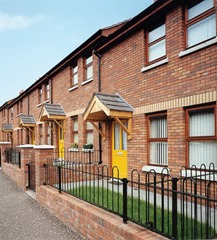 agendaNi examines the current approach to housing policy in Northern Ireland, including a merging of housing and regeneration policies and an increased emphasis on energy efficiency.

The Department for Social Development has, since 2012, sought to expand its focus beyond social housing in its traditional sense. Stephen Martin, Deputy Director of the Housing Division explains: “Our first role was really to help to create the right conditions for a sustainable and stable housing market … the second is our traditional role around providing support for individuals and families to access housing, particularly the most vulnerable.” However, in an effort to move beyond this, the department aims to tackle deprivation through the fusion of housing and regeneration policy. This is a recognition that, rather than merely building homes, the department has an obligation to build communities.

The enabling role of the housing sector in regeneration can facilitate community enterprise schemes and facilities, as well as social economy projects.

Social housing remains firmly dependent upon government spending. In Northern Ireland, Housing Executive rental levels also remain around 20 per cent lower than comparable UK regions. As a result, Stephen Martin stresses: “That, for us, raises key questions around their financing. In a tight financial climate, how do you finance the ongoing maintenance requirement of stock? So we started to ask ourselves questions: ‘Going into the future with tight public sector funding, is the current system sustainable?’”

The private sector presents a different series of challenges, particularly in relation to supply. Following the financial downturn, many developers went out of business and supply declined. Since 2007, there has been an almost uninterrupted downward trend in new dwelling starts. As a result, Social Development Minister Mervyn Storey has set up a housing supply forum, chaired by the Construction Employers Federation which is due to draw up proposals to stimulate the housing market.

Currently, there is a demand for 11,500 housing units across Northern Ireland and private developers are building approximately 4,000-5,000 new dwellings per year, while housing associations are creating around 2,000. Consequently, Martin states: “There’s a big gap widening and what we are concerned about is, if this continues into the long-term, what are the consequences for the market?” He adds: “If supply and demand are out of kilter you know that prices are eventually going to go up, and we don’t want a return to an unsustainable range of prices.”

Energy efficiency also poses a challenge for the department, not only in terms of climate change, but in relation to fuel poverty. The Consumer Council reports that Northern Ireland has the highest dependency on oil as a primary heating source for domestic homes in Western Europe (68 per cent of homes). Moreover, the Housing Executive’s home energy conservation report for 2014 highlights that 42 per cent of households are recorded as fuel-poor – the highest prevalence in the UK.

Meanwhile, Stephen Martin maintains: “The good news in the market end of housing is affordability.” Prices are now down to those last experienced in Q4 2004 or Q1 2005, and housing in Northern Ireland is very affordable: “Lenders are starting to lend again so there are mortgages available … Anyone looking to buy their first home or to move is in a good position.” However, Martin concedes: “Negative equity does remain a significant problem for some” at present, “but as the market gently improves, hopefully that position is going to change.” 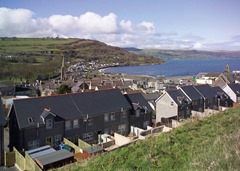 Within DSD’s current housing strategy and going forward to 2017, there are a series of five underlying themes across all tenures (see box).

The fitness standard is the bar that sets the minimum quality condition for housing in Northern Ireland: “It is very low and most other parts of the UK, as well as Ireland, have moved beyond this. We are starting to look at where we need to go and we’ll be publishing some proposals for consultations around improving that minimum standard.”

Schemes such as the Supporting People programme help vulnerable people to maintain independence in their own home or to support them in a hostel, sheltered accommodation or other forms of supported living. Similarly, Martin outlines: “We think it’s really important that people from vulnerable backgrounds, and with particular vulnerabilities, have the ability to access private rented accommodation and our partners in the Housing Executive are putting in a private rented access scheme.”

At the same time, there is a problem with empty homes in the owner-occupied sector. During the existing period of undersupply, Martin describes this situation as “perverse” and affirms that the department is taking active steps to tackle this problem. The Empty Homes Strategy outlines four specific actions being implemented: collecting relevant, accurate and up-to-date information; raising awareness of empty home initiatives; risk assessing empty homes to determine their priority for action; and bringing empty homes back into use.

In the private rented sector, the department has introduced both the landlord registration and tenancy deposit schemes.

However, with the surge in growth in this sector over the past decade, there is a renewed obligation to create confidence among landlords and tenants that they are being provided with the right support and access to services. In the HMO sub-sector, Martin notes a requirement for greater regulation and indicates that a Bill is being prepared to go before the Assembly later this year.

While acknowledging that Northern Ireland has one of the most vibrant social housing development programmes in the UK, Stephen Martin looks to the future. He contends: “We think that perhaps more can be done in terms of how the programme is funded and managed and we are in partnership with the Housing Executive looking at new delivery strategies to see what further improvements can introduce.”

• Providing support for the most vulnerable families and individuals

• Getting the structures right