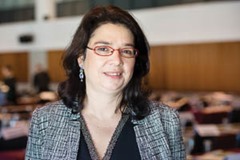 Speaking to agendaNi, Eurelectric’s Anne-Malorie Géron calls for a reassessment of the market reform process and a calmer assessment of energy security.

The European Commission had sought to fully integrate gas and electricity markets by 2014 but this target will now only be achieved in its new term. Anne-Malorie Géron, Head of Energy Policy and Generation for Eurelectric, shared her perspective on the process with agendaNi at this year’s Energy Ireland conference.

She was satisfied that the electricity market reform package has been able to achieve some of its objectives but added that “the process that we have in place is actually not equipped to deliver in time.” The first key question is: “Do we have the right process?” The second one is how Ireland, and indeed all European countries, addresses the paradigm of putting new viable generation into the market, disconnecting it from demand and exempting it from the rules of the market.

“We need to think anew,” she remarked. “Part of the solution is through an adapted market design which actually goes beyond a purely energy market but also encapsulates a capacity element.”

Géron found widespread recognition that this is an important issue and Europe was “very much at the crossroads.” If the correct policy is found, it will be another enabler for a strong and robust European market but the answer is ultimately up to the member states and the Commission.

When she visits Ireland, Géron is impressed by the strong appetite to understand the main energy policy challenges facing Europe and play a full part in the single market – although its position as an island makes that challenging.

“Ireland is, in my view, one of those countries which is also another test case for variable generation,” she explained, adding that she takes a keen interest in the national debate over the roles to be played by the markets and state intervention.

Cross-border participation and a seamless co-operation of transmission system operators will be the cornerstone of any new market design adjustments. A fully European approach to the completion of the integrated electricity market must not be hindered by the introduction of regional models.

The impact of the Ukraine crisis is a major priority on the EU policy agenda. That said, Eurelectric has found that the proportion of European electricity produced using Russian gas stands at only 5 per cent.

Géron sensed a disconnect between the heated political debate over the conflict and the actual risks that it poses to European electricity. “In terms of security of supply,” she affirmed, “when it comes to electricity production, there is no real danger.”