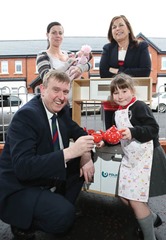 Fold Housing Association has made significant steps forward in the regeneration of two areas in Belfast, with their success being praised by Social Development Minister Mervyn Storey MLA. Officially opening a new £6.3 million housing scheme which has delivered 54 homes at Battenberg Street, the Minister announced a further 22 new social and affordable homes to be built in the Lawnbrook area, also in the Shankill.

Diana Fitzsimons, Chair of Fold Housing Association, said: “These new homes at Battenberg Street represent the continuing transformation of the area as a better, safer and healthier place to live. Fold has helped to improve living conditions which will encourage and promote physical, social and community regeneration.

“We are delighted to see that many of our new tenants are the very people who had to move out of their original homes to allow the regeneration to take place. They are now back where they belong, in a brand new, high quality home.”

The Minister said: “These 54 much needed energy efficient homes will make a huge difference to those who live in them and indeed to the surrounding community. These homes are the first tranche of a mixed tenure development in the Lawnbrook Urban Renewal Area. I expect construction to begin on the additional 22 homes in the new financial year. These will help transform another derelict site into an area where people are proud to live.

“This opening represents a new community in the making, with young families again returning vibrancy and life to the streets around the Shankill Road. Local reaction to the new build has been very positive.”

Efforts to regenerate the Village area of South Belfast are continuing with Fold’s 136 new and refurbished homes, in total, planned for the area at a cost of approximately £12 million – with Phase One and Two completed and Phase Three, which comprises 27 homes and a new Community Park, progressing on site. It is expected that handovers will commence in autumn 2015. Fold has been awarded a further transfer scheme from the Northern Ireland Housing Executive (NIHE) within the Social Housing Development Programme for Village Rehabs Phase Three for four homes for start on site in 2016-2017.

John McLean, Chief Executive of Fold, said: “Fold are delighted to be involved in the regeneration of the Village. We have already seen the first new eagerly awaited homes handed over to residents and look forward to continuing to work in partnership with the local community, the Department for Social Development and NIHE on the provision of further much needed housing in the area. Our developments provide a balanced approach to the retention and improvement of existing housing as well as the provision of newly built homes in this historic area of Belfast.

“The new dwellings whilst reflecting the character of the area, have been designed to meet the Code For Sustainable Homes Level 4. This places an emphasis on reducing running costs and the efficient heating of homes against the long-term trend of rising energy and fuel costs.” He added: “Fold remains committed to providing quality and affordable housing, which supports local communities across Northern Ireland.”