Northern Ireland’s greenhouse gas emissions have reduced at a much slower rate than other regions over the UK in the past two decades.

Statistics from the Department of Agriculture, Environment and Rural Affairs show that, between 1990 and 2020, Northern Ireland’s greenhouse gas emissions fell by 23.9 per cent, compared to an overall UK reduction of 49.9 per cent.

The 2020 figures have the important caveat of the one-off reduction in car and air transport for the duration of the lockdowns during this period of the pandemic, with the reduction in road traffic having accounted for 84.9 per cent of the reduction in transport emissions. Aviation accounted for 11.6 per cent of the decrease. It is likely that 2021 figures will show these sectors will have contributed significantly more greenhouse gas emissions than occurred in 2020.

Agriculture and the Climate Change Act

Agriculture contributed a far greater proportion of greenhouse gas emissions in Northern Ireland compared with the other regions of the UK. The corresponding figures for England, Wales, and Scotland stood at 9.0 per cent, 15.6 per cent, and 18.4 per cent, respectively.

The Department of Agriculture, Environment and Rural Affairs stated that, in 2021, there was an annual increase in the number of cattle to the tune of 4.4 per cent compared with the 2020 figures, with additional increases in the numbers of sheep and pigs. In addition, total greenhouse gas emissions from the agricultural sector have increased by 5.8 per cent since 1990. 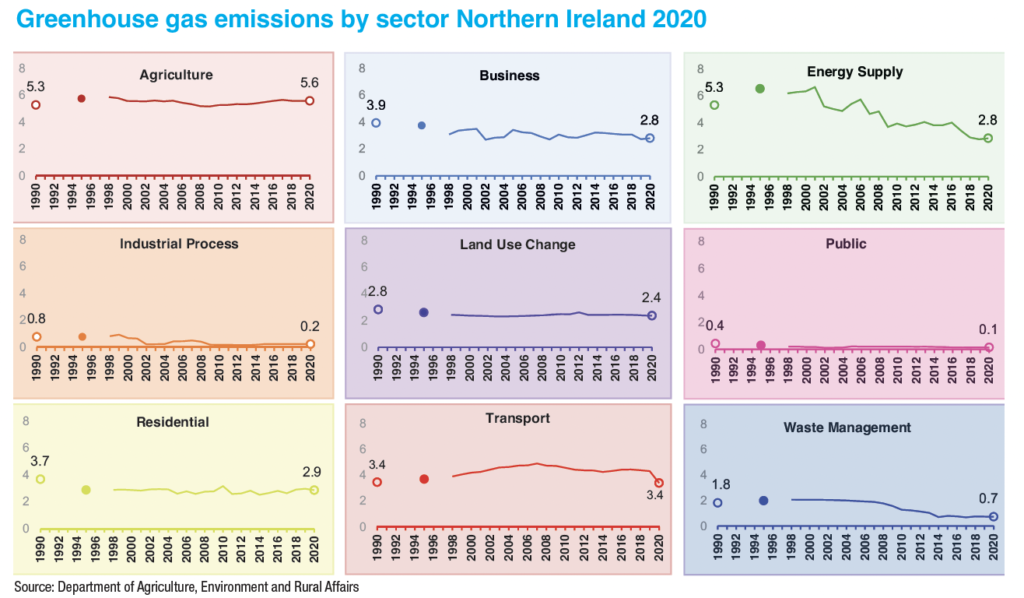 The legislation which was passed, was designed to offset cost concerns of the Minister for Agriculture, Environment and Rural Affairs, Edwin Poots MLA, who claimed that the initial net zero methane emissions target would “cost an additional £1 billion per year”. Poots’s initial proposal outlined a targeted 82 per cent reduction in greenhouse gas emissions, before the overall net zero target.

Northern Ireland’s net greenhouse gas emissions in 2020 were estimated to be 20.9 million tonnes of carbon dioxide equivalent (MtCO2e). This net figure is a result of an estimated 22.0 MtCO2e total emissions, offset by 1.1 MtCO2e of emissions removed through sequestration.

In order to transition to net zero by 2050, the Climate Change Act requires the Executive to set transitionary targets in the intervening periods of 2030 and 2040, which must be done within 24 months of the legislation gaining royal assent.

Reduction in CO2 emissions requires plans of action to be set out by the various departments, including the Department for Infrastructure, such as transitioning away from petrol and diesel cars, which will be banned in the UK by 2030. With no functioning Executive, these actions have not been set out. 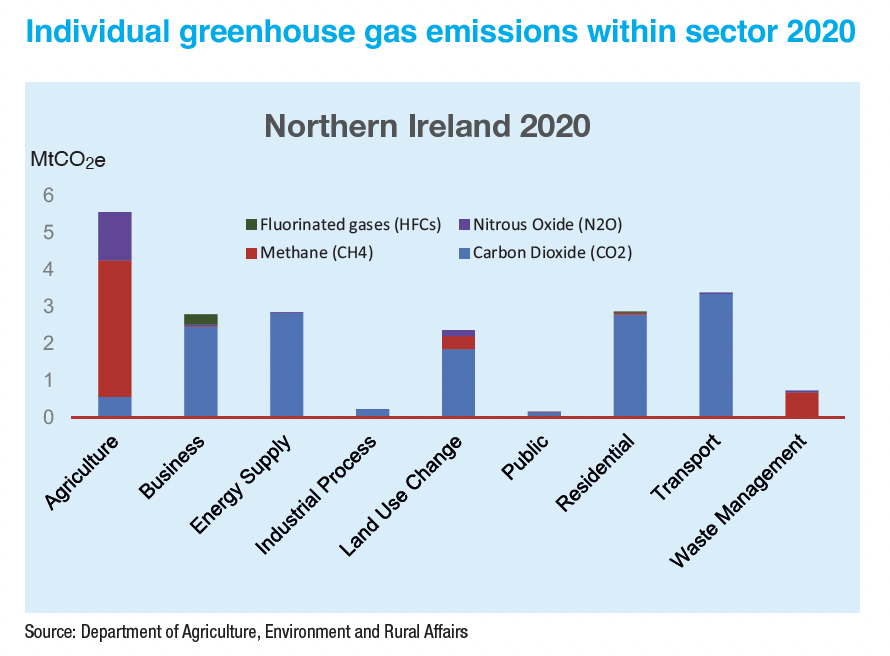