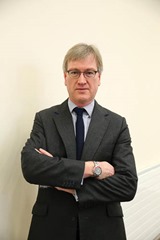 Williamson is visiting Belfast to highlight the opportunities available through the European Investment Bank (EIB). Based in Luxembourg, it invests in four priority areas: innovation and skills; access to finance for smaller businesses; climate action; and strategic infrastructure.

“Housing broadly works on a three-year rolling cycle,” Williamson notes, “and the argument we make to the Treasury is it’s a way of producing an economic multiplier, going into communities nationally [and] very quickly.” The same argument can essentially be put across in Europe.

One of the preconditions of EIB funding, though, is that the money will be going into a private enterprise environment. Based on its current market share, the Northern Ireland Housing Executive would probably be challenged by the Competition and Markets Authority if it were to apply to the EIB.

The EIB has traditionally focused on Southern Europe and therefore has only a small staff team focusing on Western Europe. As well as building up the right contacts, it’s important to tailor applications to EU priorities. Retrofitting and other energy-related proposals, for example, are likely to attract attention.

In terms of housing, the largest EIB-supported schemes in the UK are being rolled out by the Wheatley Group (Glasgow), Gentoo (Sunderland) and Wakefield and District Housing. Each of those projects has received at least £75 million and the lending formulae have been adapted through THFC to draw up smaller long-term loans – “the here’s one I built earlier approach.”

A strong investment grade public rating is typically a pre-condition with that rating being “heavily predicated on implied government support.” The EIB can finance up to 50 per cent of overall scheme costs. Social and supported housing, refurbishments, and ‘housing plus’ investments represent the best schemes and a scheme should fall within a cohesive area or a regional regeneration plan.

Brownfield sites are preferred and energy efficiency “is a winner.” However, the part of the scheme which is funded by the EIB cannot be sold. Social housing must remain as social housing while the EIB loan is outstanding.

One of the greatest risks to European funding, of course, is the prospect of Britain leaving the EU. Williamson wants to see a balanced debate on EU membership which reflects pro-European views within the business community and the UK’s nations and regions. “If we kiss goodbye to the EU,” he notes, “we probably kiss goodbye to the EIB funding as well.”

EIB funding for UK projects totalled €7 billion in 2014. The bank does invest in Western European countries outside the EU (e.g. Norway) but this mainly covers transport, industry, and energy production and transmission.

Williamson adds that the EIB “likes to engage with large scale organisations so an obvious candidate for that would be a privatised Northern Ireland Housing Executive.” Alternatively, if the government grant rates for housing were to fall below 50 per cent, it could be possible to extend the UK Government’s Affordable Homes Guarantees Programme to the province and attract EIB support on the basis.