The body responsible for the spending of the vast majority of the education budget has been deemed “ineffective” and “probably underfunded” by the first independent review of the Education Authority.

Decision making in the Education Authority can be characterised by process-driven inflexibility, the independent review, commissioned by the Department of Education found, noting that the most stringent of criticisms came from head teachers and teaching staff who felt as if the Education Authority had left them to work with little guidance other than the following of process. The report found a “general sense that process is more important than supporting a school or principal”.

Serious concern was also expressed within the report about the levels of funding received by the authority, with an overall budget of £2.322 billion for 2021/22 and a funding gap of £155 million due to a projected spend of £2.477 billion, which would account for 98.95 per cent of the Department of Education’s annual budget. “Ongoing funding gaps and a reliance upon monitoring bids to close these gaps indicates that the organisation is either underfunded or inefficient,” the report states. “It is our view that the EA is probably underfunded for the scale of what it is expected to deliver but that the organisation still has not fully established agreed baseline costs to deliver those services nor the associated resourcing requirements for those services.”

The report found there to be confusion on the part of principals and teachers as to solving problems not covered by official process, but also confusion in the sector at large surrounding the Education Authority’s role as a non-departmental public body employing over 60,000 people and the broader remit of the authority.

The report does, however, also note that the Education Authority, in its current form is “well aligned with the Programme for Government and the strategic priorities and delivery model are more consistent and sustainable than under the legacy organisations”, that the regional unitary delivery model is “more focused as a service delivery organisation than the legacy education and library boards ELBs”, and that “there is clear evidence emerging of improvements in scope, practices, and culture around governance”. In all, 13 recommendations are made by the review, chief among them the conduction of both internal and external reviews to better define the scope and remit of the authority and for it to become a more child- and pupil-centric organisation.

Decision making in education is seen as “cumbersome and a burden”, with the Education Authority adjudged to be “afraid to make a mistake” and consequently “risk adverse, passive and not progressing at the pace required to effect radical change in the system”. The report notes that the Authority has now put in place a decision-making framework that provides transparency, a “significant improvement”, although the process is noted to be too slow, moving through “innumerate” groups and processes and holding up final decisions.

The decision making within the Authority has also been found to follow these processes to a fault, creating a culture that “provides assurance around the process but not the outcome”, a situation that is further hamstrung by the fact that the Education Authority has not produced fully realised data or information that satisfies tests for currency, appropriateness, or timeliness “to provide assurance that the process in itself is delivering on effective decisions”.

Surveys conducted as part of the report found teachers and principals to be unclear as to the role of the Education Authority, with 59 per cent answering that they “do not understand the role or function of EA”, a majority rate but one well below the 92 per cent recorded by parents and pupils. Further, 94 per cent of school principals disagreed when asked if the authority was effective in carrying out maintenance on time, with 76 per cent strongly disagreeing.

A lack of corporate governance was also attested to by principals, with a “transactional not transformational” approach to the Education Authority’s dealings with schools and a lack of clarity as to what was happening outside of senior circles. Principals and the wider education system stated that they found both the authority and the Department of Education to be too far removed from the delivery of education at the coalface and thus “too siloed into their own thinking” and “despite the best will in the world, not child- or pupil-centric because the bureaucratic models created actually take effort and energy away from the child”.

Of the £155.3 million funding gap for 2021/22, £27.7 million will be offset by underspends on schools. The EA’s current budget position is said to be heavily reliant on in-year allocations to manage financial risk, with block grant allocations of £59.7 million, £36.3 million, and £55.2 million given in 2019/20, 2020/21, and 2021/22 respectively through monitoring rounds and internal department exercises. This dependence means that the financial strategy is “unsustainable”.

The report points to more overarching failures of funding for education as a whole, stating that the budget allocation for the sector “does not seem adequate to prioritise the additional learning and wellbeing support needed”. Exacerbating this problem is the finding of the report that the Education Authority is “not currently resourced, financially or with staff, to be able to effectively deliver all the duties and expectations placed on it by stakeholders”.

The Education Authority employs 60,153 staff: 8,212 teachers in controlled schools, and 51,941 support staff posts in controlled and Catholic maintained schools and authority services. The report finds that, despite the authority progressing through transformational activities, gaps in the workplace planning function and remnants of legacy culture remain.

“We can see evidence of change within the EA,” the report states, “but it is slow and not moving at pace and there needs to be more emphasis on, and commitment to, common values throughout the system by all within it.” 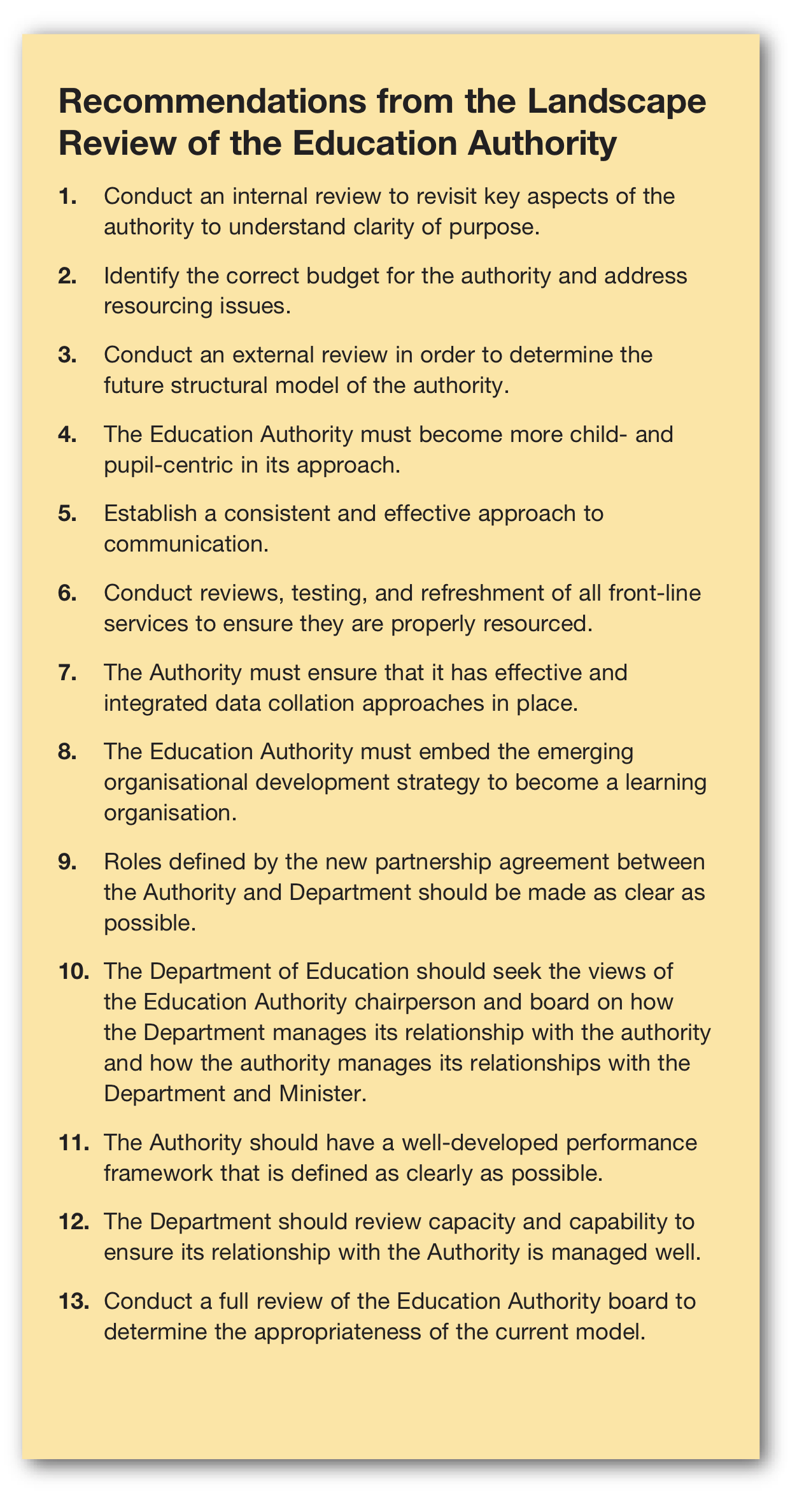 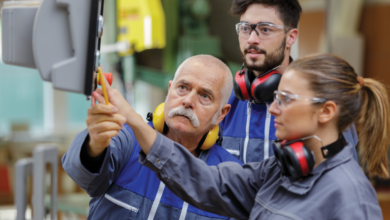