A representative body for the interests of EV drivers in Northern Ireland has told an Assembly committee inquiry that the current public charging infrastructure is so inadequate in Northern Ireland that it is not only preventing people converting to EVs but forcing some drivers back to fossil fuels.

Representatives of the Electric Vehicle Association NI (EVA NI) were speaking to an inquiry launched by the Northern Ireland Assembly’s infrastructure committee into decarbonising Northern Ireland’s road transport. Calling for investment in the network, the body said that blocked and broken chargers are disincentivising anyone considering switching to an EV, and the problem is even worse for existing owners.

In July 2021, the UK’s Competition and Markets Authority published a report on electric vehicle charging across the UK, which showed Northern Ireland to be a laggard in regard to public charging infrastructure, when compared to other regions. 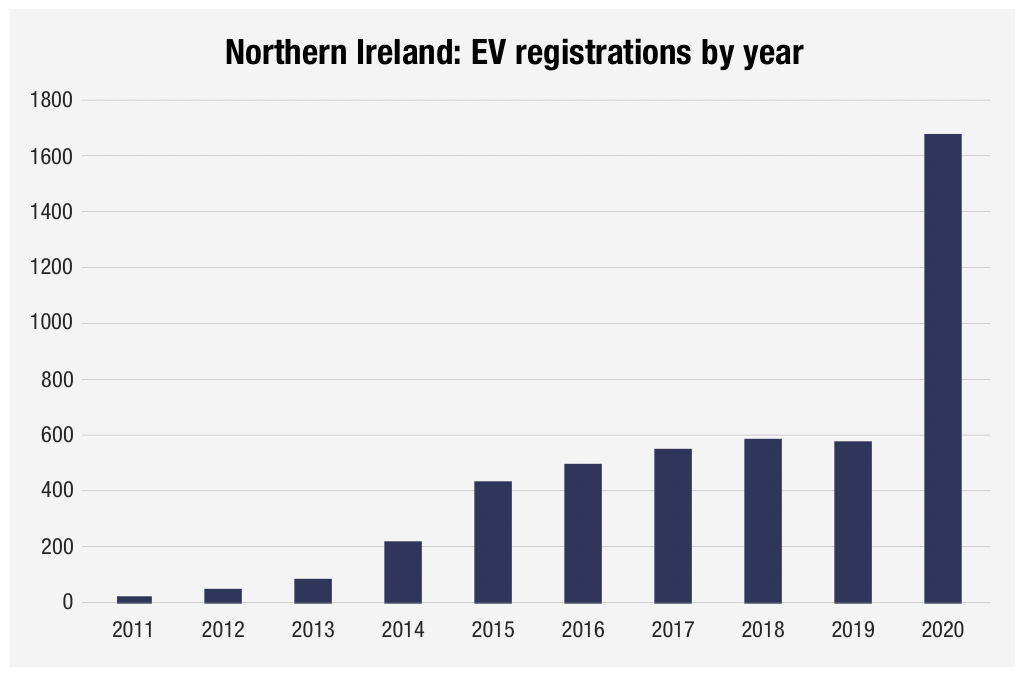 The UK Government has set out plans to end the sale of new petrol and diesel cars/vans from 2030 and new hybrid vehicles by 2035. Currently around 0.5 per cent of Northern Ireland’s vehicles fleet are ultra-low emission vehicles, half of which are plug-in hybrids.

Switch back to fossil fuels

However, despite a general acknowledgement that a mass transition from petrol and diesel cars to electric vehicles is key to meeting net zero targets by 2050, an EVA NI survey found that almost 60 per cent of EV drivers in Northern Ireland were considering switching back to petrol or diesel cars due to unreliability in network infrastructure.

A separate study to inform the infrastructure committee’s inquiry, carried out by the Northern Ireland Assembly’s Research and Information Service, found that 15 per cent of current EV owners surveyed did not intend for their next vehicle to be an EV, with reasons provided overwhelmingly pointing to poor experience of the public charging infrastructure in its current state.

Rollout of Northern Ireland’s public EV charging network has been underway since 2011. In 2015, the network developed by the former Department of Regional Development, was commercialised and is now operated on a commercial basis by the Electricity Supply Board (ESB).

However, since then, little investment has been made in extending the network and much of the existing chargers are almost a decade old, with many approaching end-of-life. In May 2021, MLA Mike Nesbitt told the Assembly that of the 337 electric-charging points across Northern Ireland, up to half are not working at any given time. At the infrastructure committee in the same month, Andrew Muir MLA described the charging network as “a bit of a shambles”.

As commercial operator of the network, ESB has requested matched funding in the region of £750,000 to £1.5 million from the Department for Infrastructure to rollout a replacement scheme for existing chargers, highlighting a difficulty in identifying a business case for solo investment. 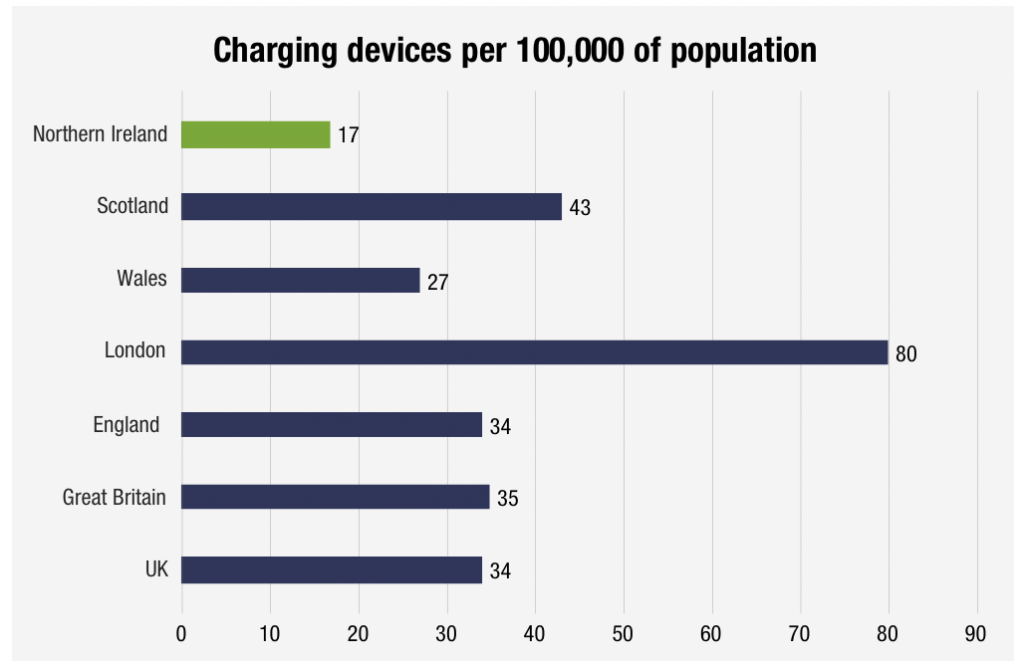 However, while the Department says that it is assisting ESB in seeking to replace 35 charge posts (70 charge points), a spokesperson said that it does not have budget for the provision of electric vehicle charge points.

The UK’s Competitions and Market Authority pointed out that since 2014, there has been limited private investment in charging infrastructure due to restrictions on the maximum resale price of electricity, and that planning legislation also made it difficult to repair and replace broken charge points. However, it notes that legislative amendments by Infrastructure Minister Nichola Mallon MLA in March and December of 2020, have removed these barriers.

Another obstacle which has been highlighted as preventing the emergence of a business case in Northern Ireland is that all public charge points remain free to use. EVA NI says that matched funding from DfI and ESB to complete the rollout of replacement chargers, would also allow ESB to turn on ‘pay to charge’, which it says has proved successful in the Republic where it has been operational for over 20 months.

However, the EV owners’ group highlights that even if the replacement rollout plan was successfully completed, Northern Ireland’s public charging network would still only be returned to roughly where it was a decade ago.

ESB has confirmed that it is aware of reliability issues with parts of the electric vehicle charging network in Northern Ireland, adding that many of the chargers are no longer supported by the original manufacturer and cannot be fixed, despite the best efforts of its maintenance contractors.

The company, which operates and maintains over 1,350 public charge points across the island of Ireland, is currently undertaking a €20 million programme to expand and enhance the charging network across the island, part funded by the Irish Government’s Climate Action Fund. ESB also operates EV networks in London and Coventry.

The company recently announced plans to begin a programme of work to replace 30 older, unreliable AC chargers with new ones, as well as five rapid chargers across Northern Ireland, which it says are “100 per cent” funded by ESB. On 10 August, ESB confirmed that four of these upgraded chargers had been already installed. All four of the upgraded chargers are in border cities: three in Derry and one in Newry.

In a statement, ESB said that a further 11 charger replacements were imminent but added: “A much larger replacement programme is required to ensure a reliable and modern network that meets electric vehicle drivers needs for years to come. We are currently in discussions with key stakeholders to explore funding options to allow this investment to happen.”

While the Department has not committed funding to the commercially operated public network, it has committed £422,371 of matched funding towards the EU INTERREG VA Funded FASTER electric vehicle network project, which is set to install 73 EV rapid charging points across the island of Ireland and the west of Scotland by 2023. The project promises more than 20 new rapid chargers across Northern Ireland, but project completion is two years away and EV drivers have highlighted that the initial bid request for 50kW units is not representative of the modern demand of chargers at a minimum of 100kW.

The Department also says that it is “encouraging local councils, where possible, to access this funding for the installation of charge points on residential streets”.

The UK Government, through the Office for Zero Emission Vehicles (OZEV), has been running a grant scheme, administered by the Energy Saving Trust, available to all local authorities across the UK to fund 75 per cent of the capital costs of installing public charge points for residents without access to private parking. Currently, it is estimated that around 30 to 40 per cent of dwellings in Northern Ireland do not have off-street parking, however, despite this, none of Northern Ireland’s 11 councils had applied to the scheme, for which £20 million was available in 2020/2021, by the end of July 2021.

Northern Ireland is unique to the rest of the UK because its energy policy is devolved. In other regions, local authorities own the street furniture and often local car parks, however in Northern Ireland, local councils do not have the same type of control over infrastructure on pavements. Instead, the responsibility for street furniture and pavement access lies with DfI.

The Competition and Markets Authority noted that this “can cause difficulties for local authorities in rolling-out on-street as they are not directly responsible for approving access to the necessary sites/furniture”.

The Department said: “Departmental officials have been engaging with OZEV and with the Energy Saving Trust (EST), who administer the scheme, in particular, with a view to supporting applications from councils in Northern Ireland.”

However, at the infrastructure committee, an official confirmed that the Department was unlikely to contribute financially to encouraging council take up of chargers. “Significant amounts of money are available at the moment that we are not applying for. Our focus is more particularly on whether we can find a way to support the councils to access that money, rather than putting extra money in from the Department.”

Calls for a cross-departmental EV network taskforce, led by DfI, to be established in Northern Ireland have largely been ignored. In May 2021, a departmental official told the infrastructure committee that the Minister was not considering a task force “at the moment” because a transport working group, set up to feed into the forthcoming Energy Strategy being developed by the Department for the Economy, was bringing stakeholders together. However, critics have claimed that the remit of the working group is too broad to complete the urgent changes required to EU public charging in Northern Ireland.

A policy options paper for the strategy has suggested the development of an EV charging infrastructure plan to “support the upgrade and extension of the network”.

Separately, DfI, with its responsibility for transport infrastructure, has been criticised for failing to show leadership in the electrification of its own fleet. It is widely acknowledged that public charging infrastructure will only form one part of a wider efforts to transition to electric vehicles. Alongside home charging provision, both the public sector and private sector employers will have a lead role in encouraging behavioural changes among their employees. Examples already exist whereby private companies and public bodies have encouraged the take up of EVs through the provision of charging infrastructure on their premises.

However, in May 2021, Andrew Muir MLA put it to Minister Mallon that her department has 1,283 staff car-parking spaces but only two e-charging car parking spaces.

In July, the Minister overhyped the introduction of two electric vans into the Department’s operational fleet. In a press release issued by her department entitled ‘Mallon’s green agenda continues as electric vans go into service’, the Minister said that the introduction of the two vans was “another step forward towards the use of low carbon vehicles for operational business in my department.”

However, as confirmed by the Department, the two vans are part of a pilot scheme “to gauge their effective use as operational vehicles”. DfI’s total fleet is made up of approximately 592 vehicles, meaning that 0.3 per cent of the fleet is now electric.

The Department confirmed that two new charge points are to be fitted at its own sites, complementing an existing four.

A spokesperson confirmed that the Department did own an electric car which is used by the Minister for official business but specified that the two vans are part of “operational fleet of vehicles”.