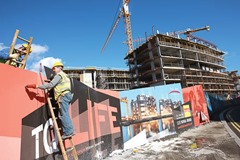 Other work, which makes up 43 per cent of all construction output, includes all industrial and non-industrial construction work carried out by both the private and public sector. It has increased by 6.4 per cent on the previous year and is at its highest level for the past two years. New private commercial work has experienced the largest decline. New public sector construction has also generally decreased since 2009 although there was a small increase at the end of 2013.

Infrastructure made up 23 per cent of total construction output between January and March this year. The volume of infrastructure projects under way declined by 22.9 per cent on the same period in 2013 and was at its lowest since 2010. Contrary to the downturn in construction sub-sectors generally, infrastructure construction levels have been broadly consistent with the 2010 average and have experienced variable growth.

Housing output in the first quarter of this year was down 13.2 per cent on the same period in 2013 and made up 34 per cent of total output. This is was due to a sharp decrease in new private housing over the downturn, which stood at only a quarter of the levels it had previously reached during the housing boom.

Employment Minister Stephen Farry’s new apprenticeship strategy ‘Securing our Success’ aims to increase employment and create jobs in the construction industry. He commented: “Traditionally, apprentices in occupational areas such as construction have gone on to become self-employed or to establish their own business. Apprentices have become employers and, in turn, employ apprentices.”