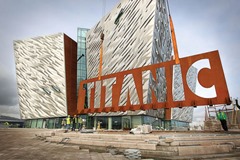 Centre for Local Economic Strategies Chief Executive Neil McInroy outlined how community planning can help to make Belfast a more resilient city. The lower level of cuts, compared to elsewhere, gives the city the chance to make a good start.

Three weeks before speaking in Belfast, Neil McInroy was witnessing what he saw as “urban failure on a massive scale” in Detroit, Michigan. The city, once at the heart of America’s automobile industry, is deeply in debt with 41 per cent of its residents (and 57 per cent of its children) living on or below the poverty line.

An economic geographer by background, McInroy has been the Chief Executive of the Centre for Local Economic Strategies (CLES) since 2003. He predicts that elements of that urban failure could start to appear in many European cities unless the public, private and voluntary sectors “collaborate like mad” to make their cities into “great places.”

Belfast City Council’s Poverty and Inequalities Framework indicates that around 20 per cent of its households and 38 per cent of its children are in poverty. However, the city is in a “very privileged position” compared to others in the UK and Europe as it still can draw on the resources of a large public sector.

“If you go across the water and look at the cuts that are being made there, you see a completely different story,” he warned. Belfast, though, cannot take this position for granted as further cuts may be imposed in future. The city must therefore “use this opportunity” to make itself more resilient.

CLES wants to see the economy, people and place working together in synergy. The father of economics, Adam Smith, is best known for his ‘Wealth of Nations’ but an earlier book, ‘The Theory of Moral Sentiments’, describes how a good economy “works in empathy with a place” rather than depending solely on large investments.

According to CLES, the orthodox economic model used over the last 20 years has not delivered change for the poorest people in cities. The think tank’s research for the Greater Manchester Poverty Commission showed that poverty was “getting worse in the so-called good times” of the boom years.

“There’s something we need to dig [into] deeply about the regeneration of places and how we ensure an economy that works more virtuously for a place and the people,” McInroy contended.

In terms of ethos, this would mean a Belfast which is “ready to take on opportunities,” adaptable and “infinitely flexible,” and is able to respond to the inevitable economic shocks. Belfast should become a city that “can take punches and can bounce back quickly.”

One of McInroy’s key messages is that social progress is possible even when the economy is in difficulties. A city should be able to regenerate itself without writing a lot of plans or requiring a lot of public investment. To improve resilience, Belfast’s key players must see the city as “the sum of its parts” rather than looking out for their own sectors’ interests.

Strategies and plans do matter but the most important thing is “how we shape place” through collaboration and working together better.

Belfast City Council’s role is to make partnerships happen across the public, social and commercial sectors (i.e. encouraging people to speak to each other) and also helping to “make the conditions for commercial success and social growth.” 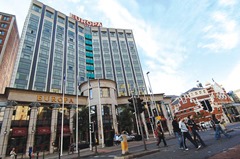 He thinks that American, German and Japanese cities understand that “collaboration role” a lot better than those in the UK.

The complexity of governance in Belfast is “problematic” and the city needs to “simplify and co-ordinate better.” Community planning is an opportunity to put this right but it should not be rushed.

Looking at Dundee’s experience of community planning over the last decade, McInroy has concluded that a city needs to take its time to get the process right. That said, there also has to be a focus on shaping outcomes.

A city’s “anchor institutions” have a particularly important role in community planning. These are large bodies, often in the public sector, which are “here to stay” and provide services such as arts and cultural venues, health care, local government, further and higher education and transport.

He added: “There should be some recognition of how these anchor institutions could work together for jobs, for maybe developing, sharing and co-ordinating approaches to supply chains, for apprenticeships.”

CLES’ report on Belfast sets out “operationally deliverable tasks” to improve collaboration and calls for an “anchor charter” which outlines how those institutions will continue to contribute to the city.

McInroy concluded: “You’ve been given a unique chance. You need to grab that chance and you need to create a new collaborative destiny for Belfast.”

Established in 1986, the Centre for Local Economic Strategies (CLES) is an independent charitable research and membership organisation with a focus on economic development, regeneration and place-making.

The centre’s eight aims are:

• championing a “change in fortune” for places and communities experiencing social and economic inequality and a lack of opportunity;

• challenging “prevailing orthodoxies” where they are seen to fail local places, economies and communities;

• influencing and developing practice and seeking to change the behaviours of policy makers at all levels;

• working with others who share its aims and values;

• raising the standards of the practice of local economic development through learning; and

• providing networks and services aimed at promoting and supporting those aims.

CLES is based in Manchester and is the only national think tank with a headquarters outside London.