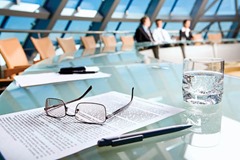 Neil Gibson, Director of the Northern Ireland Centre for Economic Policy, predicts that low consumer demand and increased austerity will dampen the recovery. Inward investment trends and an improved housing market are positive signs but it is crucial that ministers plan how to meet the fiscal challenges ahead.

Economic recovery is well under way but attention is now turning to the question of sustainability. After five years of on-off growth, is this the start of a new ‘bull-run’ with growth accelerating and the troubles of the last half a decade firmly in the rear view mirror? The latest Northern Ireland Centre for Economic Policy (NICEP) outlooks suggest a mixed picture. A broad-based recovery is encouraging in the short run but the dual pressures of projected weakness in consumer and government spending suggests that 2014-2015 may be the high water mark of the economic recovery.

The most encouraging feature of the recent economic data is that the recovery has been spread across a broad range of sectors with new job creation occurring in agriculture, health, manufacturing, services and construction (Figure 1). 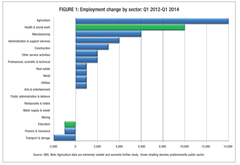 Self-employment has played an important role in the recovery accounting for 22,000 of the 39,000 net new jobs recorded in overall employment since Q1 2012. Further research into the nature of these jobs would be justified to understand the extent to which this trend is ‘necessity entrepreneurship’ (those who are becoming self-employed due to limited incomes in employment) thus suggesting potential ongoing difficulties in the labour market.

The growth in self-employment along with increased numbers of temporary workers also presents a challenge to the finance industry. Typically these individuals are considered a higher risk to lenders, but access to finance to this growing cohort in the workforce is important to sustain an economic recovery.

The broad recovery is to be welcomed but it also presents a challenge for government. Policy-makers like clearly defined sectoral groups into which they can align their support services and policy interventions. Therefore a diverse sectoral mix is more difficult to understand and support in a tailored or nuanced way. Furthermore, government’s own funding pressures create a need to focus on target sectors but the data clearly indicate that there are world class businesses operating in all sectors of the Northern Ireland economy.

The NICEP forecast suggests a dominance of professional and administrative services in the overall job creation numbers but growth will be experienced across most areas of the economy (Figure 2). This cross-sectoral recovery is also supported by the findings in the latest InterTradeIreland survey of firms’ performance (Figure 3). As a consequence, picking winners on sectoral basis alone will not be an effective strategy.

Government and consumer pressures cast a shadow over recovery 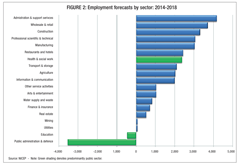 The prospects for the rest of 2014 and into 2015 look positive and all indications are of a relatively robust recovery enjoyed by a wide sectoral base. However, there is greater uncertainty in the medium term.

In particular, interest rates are set to increase despite continued slack in the labour market (Figure 4) and benign inflation data. The Governor of the Bank of England has given some conflicting messages in recent weeks but the most likely timeline for an initial moderate increase remains late 2014 or early 2015.

Whilst significant rises are unlikely, increases towards a level of 3 per cent are expected which will put pressure on many homeowners as mortgage rates increase. On a positive note, a more competitive lending environment will allow many people to minimise the potential impact of rising variable rates through re-mortgaging opportunities. However, the challenge for mortgage lenders will be to consider how they treat individuals in negative equity, in a rising market and with secure incomes.

Secondly, wage pressure is likely to increase this year but it remains to be seen the extent to which employers will start to increase salaries above the rate of inflation. This is more likely to be a private sector issue as the public sector is already committed to pay restraint. Therefore the continued squeeze on consumer incomes will likely take the edge off the pace of economic recovery in the medium term. 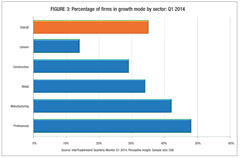 Finally, the UK Government’s planned austerity programme after the May 2015 general election raises specific issues for Northern Ireland. In particular, the other key areas that drive economic growth (investment and exports) are limited in the local economy by the small scale of the private sector.

Of course, the austerity programme could be subject to change in terms of pace and timing, either through a change in policy direction or as a result of nervousness over the impact this could have on economic recovery. A change in direction may be less likely under a Conservative-led government but strangely the Labour Party has not set out an alternate plan for government spending or deficit reduction.

The base case NICEP forecast, which does not include any change to either local corporation tax rates or government spending plans, anticipates a recovery that slows from 2016 onwards. A more buoyant outcome is possible. Perhaps the consumer will be more robust than the economic modelling suggests, or exports will boom in a way not currently anticipated but the central prediction is that an economy built on consumer and government spending, such as Northern Ireland, faces more difficult times after this short-term economic boost.

The decision over corporation tax is due shortly. Reading the statements made in the Scottish debate and the political statements made by coalition ministers suggests a strong likelihood that the power will be devolved. The general tone of the Coalition Government’s economic language is of ‘self-reliance’ both at the individual as well as regional level and thus any devolution of responsibility for economic growth fits within this ethos. This, of course, is based on the assumption that it is self-funded and cost-neutral to the Treasury.

A challenging time lies ahead for the Executive and it has been suggested that a choice must be made between reducing corporation tax and avoiding the impact of welfare reform. With income inequality so high on the political agenda, this would be a very difficult choice. The harsh reality of Northern Ireland’s economic predicament is that the private sector is too small and as a consequence the tax base is of an insufficient scale to fund the public services we expect.

Corporation tax presents the opportunity of gaining a policy lever that moves money from the private sector to the public sector. Time will tell if a reduction in the corporation tax rate will create employment and swell the public coffers as the NICEP economic models suggest but setting the uncertainty of the future next to the certainty of the past, we know that the status quo position has thus far failed to deliver stellar economic performance.

With the prospect of increased austerity and a housing market that is hard to forecast, there is much work for policy-makers to do. Having been given fair warning of tighter government spending plans post 2015, the Northern Ireland Executive should not be taken by surprise. Given that our nearest neighbour (the Republic of Ireland) has been through a period of very aggressive public spending reductions, one would hope ministers and their departmental officials are exploring the lessons learned in Dublin. 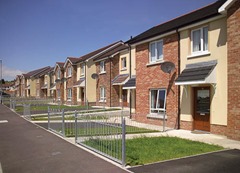 Policy-makers should also be continuing the dialogue with banks that has been established in recent years. As previously noted, there are a number of areas to consider including understanding how the industry could help deal with future price bubbles, addressing the access to finance issues for the growing number of self-employed and temporary workers, and assisting people in negative equity who may need to move house or re-mortgage.

Finally, there is a need to prepare the ground for a potential reduction in corporation tax if the powers are devolved, including plans to market the region to potential investors.

This cautious economic outlook must be seen in the context of the opportunities which exist over the next 18 months for both government and business to put in place measures to secure our economic prosperity in the longer term.

The improving housing market will be a boost to consumer confidence and provide a welcome lift for the construction sector. Northern Ireland’s success in attracting inward investment shows little sign of slowing, and may be accelerated by new tax powers.

Whilst there is work to do, preparing for the challenges now may prevent a reduction in economic growth and hopefully commentators will be able to criticise economists again for their poor forecasting abilities.