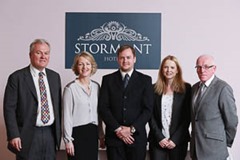 The value of the G-Cloud in procurement and its relevance to Northern Ireland was discussed at Equiniti’s recent conference on this important IT policy initiative.

On that extraordinary day in May 2010 when David Cameron and Nick Clegg stood shoulder to shoulder in the back garden of 10 Downing Street announcing that the UK had a coalition government for the first time in 65 years, few could have predicted the seismic changes to government services that would follow.

It quickly became a stated aim of the Conservative/Liberal Democrats to shift 50 per cent of new government IT spending to cloud-based services by the end of the parliamentary cycle. The policy precipitated the G-Cloud framework – a Crown Commercial Service initiative aimed at easing procurement by public sector bodies to enable greater savings.

The service began in 2012. A year later there were 700 suppliers – more than 80 percent of which were small and medium enterprises. Sales continued to grow, hitting over £50 million in early 2014.

Surprisingly, given its high density of IT companies, Northern Ireland appears to lag behind. Attempting to understand the reticence of the Northern Irish public sector to use the framework Equiniti invited a panel of experts, chaired by BBC Radio Ulster’s Karen Patterson, to discuss government procurement via G-Cloud.

Such was the interest from local public sector IT managers and procurement directors, it was necessary to increase the audience from an expected 50 to over 100, proving there is an undoubted thirst among Northern Ireland’s public sector for knowledge around the digital transformation of public services.

“In truth, I wasn’t so sure about the system [G-Cloud] at the start,” he said. “There were challenges from my point of view. I found the service descriptions to be generic and the pricing information was limited and I still feel that the two-year contract is limiting. I would be very surprised if a business would want to take the time to procure and build a solution only to then redo the process after 24 months. Perhaps ‘three years plus one, plus one’ would be a better option.”

Despite initial criticisms, Andrewes went on to champion the framework: “The key point to make is the time saving that it provides during procurement. G-Cloud is easy to use, it’s value for money but above all it offers a quick route to suppliers within a framework that is already compliant. This immediately strips out a whole layer of the procurement process. A huge amount of time is saved at no cost. I am not aware of anything else that gives you this combination of time savings.”

Stephen Allott, Crown Representative For Small and Medium Enterprise, was quick to echo Andrewes: “The beauty of this system and part of its success is that it is a fast and easy way to buy things that is compliant by default while offering best value for money from suppliers.” 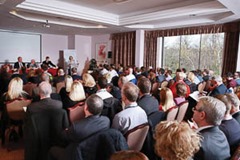 Allott, who has worked extensively in the private sector having served as chairman of the board of seven small to medium enterprises and as a non-executive director on two further SMEs, is charged by the Prime Minister with building a more strategic dialogue between government and SMEs.

“That is something I am not sure we have solved just yet and we continue to try and find an answer. G-Cloud has already been a success from my point of view, the UK is now leading the world in digitisation of government services.”

He added: “This is definitely the future but we are in a process of evolution and very keen to get feedback on any improvements that can be made.” Allott urged the audience to post any feedback on the G-Cloud blog: digitalmarketplace.blog.gov.uk

“You all know that I am risk-averse, but what people need to understand is that procurement is a devolved matter and there are differences between us and GB despite the fact that we follow the agenda set in London,” Gilgunn cautioned.

“Also, at the moment we have seven challenges in the courts, and there were two more sitting on my desk this morning so we have to proceed cautiously. We need to make sure that at each stage of this G-Cloud procurement process that there is a very careful audit trail. The CPD supports the use of the G-Cloud framework and the Digital Marketplace. The Digital Marketplace offers agile development, of which I am a big fan.”

Andrewes responded to Gilgunn’s wariness: “I would echo what Tom has been saying. It is essential at all times that we get our procurement colleagues fully involved at all decision points. Personally, this is standard practice to keep yourself and everyone else right.”

Before Karen Patterson opened up to the floor, Equiniti Director Nigel Farr was asked whether he had seen a change in how his business worked post-G-Cloud.

“We have seen a transformation as a medium supplier,” Farr commented. “Previously we saw significant barriers to doing business with government. It seems as if G-Cloud has allowed business to move away from the restrictive and not very efficient contracts. There is a process that still has to be followed and there is plenty of work to be done on procurement but we are more than happy to put the resources into this.

“Perhaps the most important aspect of the framework is that it allows the focus to be on the business needs rather than anything else.”

AP Maginness can be contacted at:

Equiniti is a trusted partner to the public sector offering business process management solutions and IT services that transform government services. As an official supplier to the G-Cloud framework, we have over 175 years’ experience of delivering IT software and services to the Government ranging from infrastructure and hosting through to business process transformation solutions.