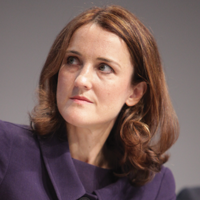 The eighteenth Secretary of State for Northern Ireland and second woman to hold the job, Theresa Villiers is seen as a high-flying Tory with a strong grasp of detail and good prospects for a future ministerial career.  However, the impasse over the corporation tax decision suggests that Villiers will be left to break bad news if the Treasury turns it down.

A ‘no’ decision would have been a setback for Owen Paterson after four years of campaigning but, on the other hand, Villiers then would be freed up her to have her own policy agenda.

Her political experience in government matches up with the NIO’s economic role (especially with the forthcoming devolution of air passenger duty) but she will have to catch up quickly on the rest of her brief, including the contentious questions of parading and political reform, and the continuing threat of terrorism.

Born in 1968, Villiers grew up in North London.  As the Irish News has pointed out, her ancestors included the Earl of Clarendon (Lord Lieutenant of Ireland, 1847-1851) and the Duke of Buckingham, an advisor to James I at the time of the plantation.  She studied law at Bristol University and Jesus College Oxford, before a call to the Bar and five years as a lecturer at King’s College London (1994-1999).

Her term as an MEP for London from 1999 to 2005 briefly overlapped with Jim Allister’s arrival in Brussels, and he found her “very able”.  Ireland’s boom and bust, she has written, was “made far worse” by its fixed interest rates within the euro zone.

“Theresa Villiers has always struck me as a very talented politician, but one who hadn’t been given a real opportunity to shine at Westminster,” North Down MP Sylvia Hermon told agendaNi.

“Now, as Secretary of State for Northern Ireland, the Prime Minister has given her that chance.  She’s a smart choice, and shouldn’t be underestimated.  Ms Villiers is charming, vivacious and clever, but she will also be bold and decisive.  I don’t expect to be disappointed.”

Alliance MP Naomi Long had dealt with Villiers on aviation and her Minister of State, Mike Penning, on coastguard services.

“In those matters,” she commented, “they demonstrated a sensitivity to the particular challenges in Northern Ireland, a willingness to listen to local elected representatives and a desire to respond to concerns raised, which can only be seen positively and is, I hope, a good sign for future engagement.”

Radically reforming the Common Agricultural Policy (CAP) was one of her main interests.  Indeed, in 2006, she told MPs that CAP was an injustice that “keeps thousands in Africa struggling with abject and unnecessary poverty” due to its subsidies for Europeans.  CAP also raised the cost of food for the poorest in Britain and Europe and, in her view, the money would be better spent on R&D.  That view is rarely articulated in Northern Ireland, with its strong and influential farming lobby.

Villiers stood down from Europe following her election as MP for Chipping Barnet in 2005.  The suburban seat was previously held by Reginald Maudling, the Home Secretary during the early years of the Troubles.  A close supporter of David Cameron, she was quickly promoted to Shadow Chief Secretary (2005-2007) and then Shadow Transport Secretary, a role in which she led Tory opposition to Heathrow’s third runway.

Seen as a competent frontbencher, Villiers was tipped to become Transport Secretary but instead was appointed Minister of State, to accommodate Lib Dems in the Cabinet.

With aviation staying in her portfolio, she therefore addressed the Northern Ireland Affairs Committee’s inquiry in June.  Villiers noted the “longstanding concern about [the province’s] dependence on the public sector”.  A significant loss of air links between London and Belfast would be “not just a matter of economics” and could have “very serious … political and community cohesion consequences” i.e. increasing the perceived distance between Britain and Northern Ireland

The Minister also quipped: “As a great fan of the old Routemaster, I am delighted that the Mayor [of London] is delivering the new one, and the fact that it is built in Northern Ireland is even better.”

After a quiet term at Stormont, Minister of State Hugo Swire is moving to the Foreign Office and being replaced by Mike Penning, also fresh from the Department for Transport.  As a young Grenadier guardsman, Penning served under Captain Robert Nairac, the Army intelligence officer murdered by the South Armagh IRA in 1977.

Ironically, the two ministers are united by their links to another deeply divided society: Cyprus.  Penning was a peace-keeper in the UN force whereas Villiers supported its peace process during her time as MEP.  Villiers was particularly critical of Turkey and has supported the island’s re-unification; a brittle unity had been maintained under British rule and as an independent state between 1960 and the 1974 conflict.

Welcoming Villiers to her post, Shadow Secretary of State Vernon Coaker said he wanted to work with her “in a bipartisan and co-operative way on issues like parading and security, whilst continuing to hold the Government to account on issues like the economy and welfare reform.”

Coaker had disagreed with Owen Paterson on many occasions but added: “I never doubted his deep affection and concern for Northern Ireland and its people.”

Gerry Adams, a frequent critic of Owen Paterson, hoped that Villiers would “bring a new and more progressive focus to the many issues which need to be dealt with at this time.”  Sinn Féin, he said, would continue to oppose “Tory Government austerity policies” although the Executive’s ability to do so is constrained by the block grant.

The warmest tribute came from Mike Nesbitt, himself a former UCUNF candidate, who found Paterson “possibly the most diligent Shadow Secretary of State we have ever had.”  The UUP asked Villiers to prioritise the devolution of corporation tax and a new Northern Ireland Act to reform the Assembly.

The DUP and SDLP gave Villiers a general welcome and were ambivalent about Paterson’s time in office.  Both parties had found common ground with him on corporation tax but were reluctant to pay for the move through large cuts in the block grant.

Under devolution, the key ministers for Northern Ireland are the Secretary of State and the senior members of the Cabinet with major policy responsibilities for the whole UK.

The reshuffle does place some new ministers in charge of non-devolved areas.  As Culture, Media and Sport Secretary, Maria Miller oversees broadcasting.  The Ministry of Justice, now under Chris Grayling, takes the lead on data protection and freedom of information.

New Transport Secretary Patrick McLoughlin has overall responsibility for aviation policy.  The Attorney-General for England and Wales (Dominic Grieve since 2010) doubles as Advocate-General for Northern Ireland: the Government’s chief advisor on Northern Ireland law, with an eye on devolution and national security.