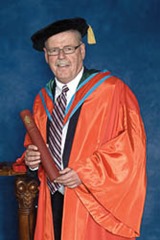 Andy McMorran, former principal of Ashfield Boys High School, shares the lessons he has learned in turning a school around.

The link between tackling underachievement in a school and the world of policy and business was initially so obvious that it was missed by me. If the economic infrastructures (financial or otherwise) are to be effective and efficient in this little province of ours, then they must include all levels of our social structure of which education is a cornerstone.

The key issues of improving the performance of a post-primary school serving the deprived areas of East Belfast are not rocket science and involve people.

Spending a year or two after my appointment maintaining, evaluating and assessing the strengths and weaknesses of the school, followed by a re-staffing to suit the needs of the children, and developing a child-centred management style in the senior management team, were the key areas of the roller-coaster ride which led to the well-publicised success of Ashfield.

I arrived as vice-principal under an educational expert, Rab Dunn, who had just been appointed as principal. The four-year journey after that, before his retirement, was one of learning fast from a true professional. The education world has much to learn from the business world as, on his retirement, this highly successful school principal was ‘let go’. Surely there is a place for consultants in the process of school improvement?

I am sure that, in the business world, I would be termed a good ‘man manager’ but I prefer to be termed a ‘people person’.

The process gave the pupils new rules and relationships, teachers who actually wanted to help, and a principal who would listen but always promote a strong school discipline on uniform, behaviour, attendance, punctuality and what happened outside school. For the staff, the process gave a code of conduct on correct treatment of 11 to 18 year old boys and what they needed in their future.

One meaningful statistic: 70 per cent of my staff were male when I took over and 15 years later, 70 per cent were female. A difficult issue for me to grasp was that these female teachers were better teachers than I ever was and did not need threats to get the pupils to achieve. On the other side of the coin, they were treated as professionals as their commitment and work rate were exceptional. Proper time management through efficient policies and processes also contributed.

The process also gave parents a part to play: responsibility for their children’s actions. Parents, in general, at the start of the whole 15-year process started with the statement: “Can you prove what my son is being accused of?” And at the end of the 15 years: “What has he done now?” A massive cultural shift.

The basics were academic achievement, starting A-levels in the school, attendance, improving the school fabric, listening to local community views on the school, the new subscription of pupils trying to get in, performance of all school staff, and relationships with parents – and in fact all of the people mentioned earlier.

Holding management team meetings after school and saving money from ‘during school’ meetings meant less nonsense was being discussed, common goals were set and everyone would get home to their families – as it is only a job.

Everyone involved was given a blueprint to work from. It involved the most important sentence in the English language: “If it is up to be, it is up to me.” The principal has his own little blueprint: “It is easier to seek forgiveness than to ask permission.” So just get on with it.